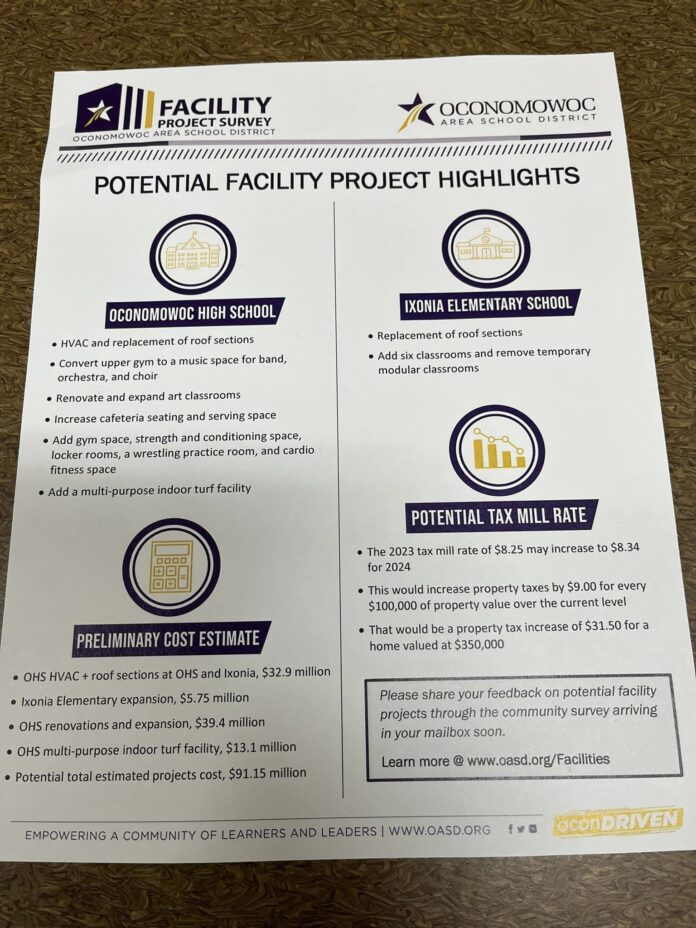 Meeting attendees unloaded on school officials at an informational meeting this week on a possible $91 million Oconomowoc school referendum, with one man telling them, “This is all bullsh*t.”

One of the biggest items of concern: Officials’ desire for a “multipurpose indoor turf facility.”

Larry Halverson, 74, of Oconomowoc, said that his home assessment has continued to go up, “even though I didn’t do a d*mn thing to my house. My taxes keep skyrocketing.”

Officials gave out a handout that listed $91.15 million in potential costs. They included: $32.9 million for Oconomowoc High School HVAC and roof sections at OHS and Ixonia; $5.75 million for Ixonia Elementary School; $39.4 million for OHS renovations and expansion; and $13.1 million for OHS multi-purpose indoor turf facility.

Meeting attendees made comments like “you guys are moving too fast. How would anyone know about this meeting? It’s insanity,” and “put money away. Have a plan in place to avoid having to go to referendum all the time” and “you’re asking for more and you haven’t shown you can take care of the first millions.” They said that the School District should run more like a private business, looking for efficiencies and cost savings, not only seeking more revenue.

“Here you are with your hand out,” a woman angrily scolded the officials. “You’ve got us over the barrel with the boiler and HVAC. The other stuff is a pipe dream. We don’t need it.”

“You haven’t done sufficient planning for decades,” she said. She called it a “fancy plan that we don’t need.”

She urged officials to “stick to core competencies,” saying, “this has been a working-class town since the 1850s.” She refused to give her name when approached by WRN.

Alexandra Schweitzer suggested that officials consider “booster clubs and pizza sales,” saying, “Why should I, with no kids in the district, pay so much?”

Superintendent Michael Sereno led the meeting. Sereno was hired after plans were put in motion for the requests. He fielded questions and told residents that officials want to hear their concerns. A survey, which was delayed, will soon be going out to all Oconomowoc residents, he said.

“We want to get a sense of what the community feels,” Sereno said. “It also has an impact on our community,” he acknowledged. “There is certainly a financial impact on this.”

Sereno told Wisconsin Right Now that there is not a firm proposal for a referendum yet. He characterized the meetings as exploratory. If the Oconomowoc school referendum did end up being placed on the ballot, that could happen in April 2023, he said.

Only a smattering of residents attended the meeting in the high school’s cafeteria.

Sereno and other officials presented a list of concerns. They said that Ixonia Elementary School is “beyond functional capacity” and has two temporary classrooms. Art classes in the high school are being held in former home ec spaces. The cafeteria is too small. There is pressure on the athletic programs. There are three bands, but there is no space to bring them together, and so on.

Everyone in the room seemed to agree that some of the items on the list – primary fixing a 1960s-era boiler system and HVAC – are necessities. But some of the citizens who attended the meeting questioned some of the other items on the list as “wants.” For example, in addition to the new indoor turf facility, officials hope to build an area with a “coffee-shop feeling” where students can display their artwork at Oconomowoc High School. They also want to build a cardio fitness space.

Some citizens also questioned why the School District did not save money over time for the boiler system and HVAC, knowing these issues would be coming down the pike. Officials responded that, several years ago, a fund was started to do just that, but it only has $10 million in it so far.