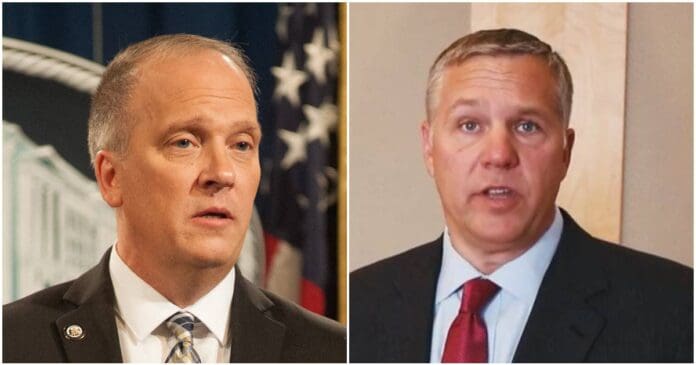 The Jarchow bill was so poorly written that it earned the strenuous opposition of the Republican Attorney General and 5 of the state’s major law enforcement organizations.

Former Legislator Adam Jarchow, who is running for state Attorney General, co-authored a bill to create a political “oversight” committee of police that so troubled Republican Attorney General Brad Schimel that Schimel warned it would “actually serve the interests of criminals.”

People who don’t trust big government and who respect law enforcement officers may cringe at the name of the committee Jarchow and a handful of other legislators wanted to create to give politicians oversight over some decisions by police agencies throughout the state: “the legislative Committee on the Oversight of Law Enforcement and Investigation.”

In the Feb. 10, 2016, letter, Schimel wrote that the bill, put forth by Jarchow and a handful of other legislators, “would compel law enforcement to compromise existing and ongoing criminal investigations.”

Wrote Schimel, “The bill will actually serve the interests of criminals by allowing them to evade accountability and punishment by exposing techniques used by the police that may be developed in the future that are both Constitutional and effective.”

The committee members would have all been politicians with no law enforcement representatives.

The WPPA later ranked Jarchow the state’s second-worst legislator. Jarchow responded by trashing the state’s largest police association because of its bipartisan endorsements and claimed its priorities weren’t in order (the WPPA has endorsed Republicans for AG, notably Schimel and JB Van Hollen).

Jim Palmer, executive director of the WPPA, responded, “The fact of the matter is this, prior to jumping into the race to be WI’s top cop, @AdamforAG never really showed any interest in law enforcement issues. That’s why he scored so poorly on the WPPA’s report card, and why he’s misrepresenting that abysmal performance now.”

He added: “P.S. @AdamforAG, our board (consisting solely of officers from across the state) establish our priorities, and not anyone else, but thx for letting us know what you think officers’ priorities ought to be.”

He denied that the legislative report card in question included collective bargaining bills.

The bill that Jarchow helped author gives a window into why the WPPA was so unhappy with Jarchow over the years. It also gives a sense of Jarchow’s opinions of police during an era before he was running for state Attorney General, wrapping himself in the badge.

In his letter, Schimel stated that the proposed law was “unnecessary as there is no evidence of a crisis in Wisconsin involving law enforcement using any tools to track criminals.” He said the courts “appropriately serve as the guardian” of citizens’ Constitutional rights.

He said the bill would also “disrupt the effective relationship between state and local law enforcement and their federal partners.” The Republican Attorney General, who was Waukesha County DA before being elected to the post, said that the state Department of Justice’s Division of Criminal Investigation works with federal agencies but the Wisconsin Legislature “does not have authority over these federal agencies, nor would any of the agencies subject themselves to the jurisdiction of the legislative committee on the oversight of law enforcement and investigation.”

Schimel warned that the bill would “likely cause these task forces to cease operation and for local law enforcement to have no role in stopping criminal activity that may be occurring in its jurisdiction.”

He said the bill would also allow the legislative committee to “stop law enforcement from investing in necessary software upgrades or new electronic hardware.”

The law enforcement associations also wrote a letter in opposition to the oversight committee.

The groups raised a host of concerns with the bill including that it would “unreasonably require that a local government’s acquisition of any federal military resources, even ammunition, be specifically approved by the oversight committee prior to a local government’s receipt and use of those items.”

It failed to include law enforcement representation, they said. It “ties law enforcement’s hands by failing to provide for any good-faith allowance for the acquisition or use of any device or technology that might be needed under swiftly-emergent or exigent circumstances to quickly react to an ongoing criminal investigation,” the police associations’ letter stated.

The bill also failed to provide penalties in case protected or confidential information was divulged by the oversight committee’s members.

The bill failed to pass the Senate.

Although he wraps himself in the badge now, as a Legislator, Jarchow seemed to have a distrust of law enforcement power. Jarchow, who once said police reform was probably needed in Milwaukee, has never prosecuted a criminal case.

[Note: We have also explored the record of his main primary opponent DA Eric Toney. We were the first news site to thoroughly explore Toney’s later-dismissed COVID prosecutions. We are exploring Jarchow’s legislative history because, to be sure, Democrats will. We want to educate primary voters on their choices.)

Specifically, the bill, according to the legislative text, would have done the following:

2. The committee may review a proposed transfer of military weapons, surveillance equipment, or armaments from a federal military unit to a Wisconsin law enforcement agency. A law enforcement agency that is to receive such weapons, equipment, or armaments must notify the committee of the proposed transfer before the transfer takes place.

This bill also provides the committee with subpoena power and access to investigatory records from secret John Doe proceedings at the close of such proceedings if such access is necessary or convenient to carry out the duties and powers of the committee.

Assembly Bill 845 was introduced on Feb. 2, 2016 by Jarchow and was co-authored or co-sponsored by six other Republican legislators: They are Craig, Hutton, Knudson, Sanfelippo, Wanggaard and Kapenga.

For Jarchow, though, it was part of a pattern of anti-police and anti-public safety votes in the Legislature. Some examples:

He was the only Republican to vote against making it a felony to batter or threaten a prosecutor or cop’s family member or to threaten a cop.

He banded together with anti-police Democratic legislator David Bowen to limit mandatory minimums for violent felons.

He also co-authored a bill that would have decriminalized possessing less than 10 grams of marijuana, reducing the maximum penalty from six months in prison to a $100 fine. It also would have eliminated the increase in penalty for a second or subsequent violation.

Jarchow said on audio after leaving the Legislature that he believes tensions in the community against police are exacerbated because there are too many felony crimes on the books.

He co-sponsored a bill to allow the state Department of Corrections to “authorize a person on extended supervision, parole, or probation to travel out of the United States under certain circumstances if the person submits a written request and receives written authorization prior to the travel.”

He voted against funding a full or part-time officer for a Lafayette County drug task force to fight heroin in rural areas.

He once called the Capitol Police an embarrassing “bozo operation” when they wouldn’t press charges into a tweet that Jarchow believed was a threat by a man who grew upset Jarchow posed with an AR-15 after the Florida school shooting.