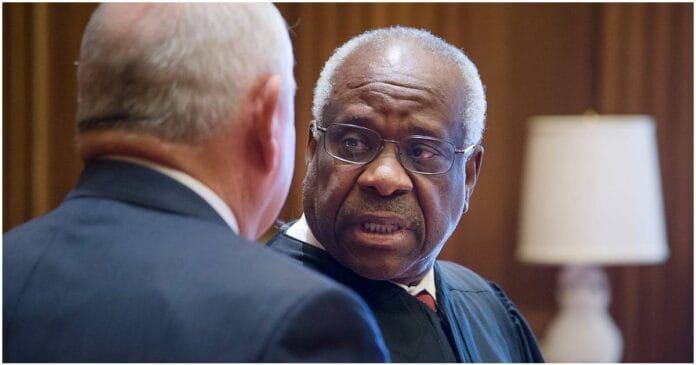 It’s been two weeks and there’s still no word on who leaked the U.S. Supreme Court draft brief indicating that the court was set to overturn Roe V. Wade and returning the issue of abortion back to the states.

At a recent event in Dallas, Texas, hosted by the American Enterprise Institute, the Hoover Institution, and the Manhattan Institute, Supreme Court Justice Clarence Thomas spoke about the leak and his concern for the rule of law and credibility of the court.

A roughly 8-minute clip of his talk was published by C-SPAN, in which he said, “I think we are in danger of destroying the institutions that are required for a free society. You can’t have a civil society, a free society without a stable legal system.

Justice Clarence Thomas: "I think we are in danger of destroying the institutions that are required for a free society. You can't have a civil society, a free society without a stable legal system…There was such a belief in the rule of law, belief in the court…" #SCOTUS pic.twitter.com/F7sDNRgGtf

“You can’t have one without stability in things like property or interpretation and impartial judiciary. I’ve been in this business long enough to know just how fragile it is.”

Prior to the draft opinion being leaked this year, Thomas said it was impossible to think that even one line of one opinion would be leaked by anyone.

“No one would ever do that,” he said. “There’s such a belief in the rule of law, belief in the court, belief in what we were doing, that that was beyond anyone’s understanding or at least anyone’s imagination, that someone would do that.”

Now, “look where we are,” he said. “That trust and belief is gone forever. When you lose that trust, especially in the institution that I’m in, it changes the institution fundamentally. You begin to look over your shoulder. It’s like kind of an infidelity, that you can explain it, but you can’t undo it.”

New York University professor Melissa Murray holds a similar sentiment. She told the New York Times last week that the leak “violates the omertà that traditionally has shrouded the court’s deliberations. To the public, this not only looks like the kind of maneuvering that we’ve come to expect from politicians, it also strips the court of the mystique it has generally enjoyed.”

Meanwhile, Chief Justice John Roberts’ reputation is also at stake. He has a lot riding on whether or not the leaker is identified and punished, Dan McLaughlin at National Review Online notes.

“John Roberts’s Court is at stake here,” he argues. “If decisions can be leaked in draft form with impunity in order to influence their outcomes, this will become a regular feature of high-profile cases, placing the Court under even worse pressures and threats than already exist.”

The Supreme Court isn’t the only institution that’s changing, Thomas said. Universities, colleges, law schools have all changed over the last few decades. Today, the climate on most campuses doesn’t allow for peaceful debate of differing views, instead policies of censorship are creating a “chilling effect” on speech.

He recently met with students attending the University of Georgia, where he said students expressed that they can’t publicly affirm pro-life or traditional family views because of the climate on campus.

At Yale Law School, his alma mater, students could once freely speak about anything, “it was anything goes, you do your thing I do my thing,” he said. Now. there’s censorship, he said.

“I wonder how long we’re going to have these institutions at the rate we’re undermining them,” Thomas said. “And then I wonder when they’re gone or they are destabilized, what we’ll have as a country – and I don’t think that the prospects are good if we continue to lose them.”