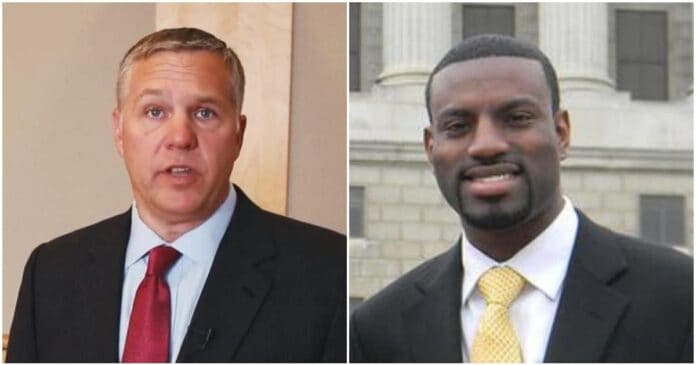 We are committed to exploring the records of the primary candidates to educate voters on their choices; conservatives learned the hard way with the Brian Hagedorn election to Wisconsin Supreme Court what happens when they don’t vet candidates.

Republican Attorney General candidate Adam Jarchow banded together with David Bowen – who is one of the most anti-police, radical Democrats in the state Assembly – to limit mandatory minimum sentences for violent felons who repeatedly illegally carry guns.

Bowen was present at the violent mob assault against two police officers in Wauwatosa, allegedly lied about what happened in a public statement, and then refused to give police a statement about what he observed there.

He is now running for lieutenant governor.

Jarchow, a former legislator, who suggested police reform in urban cities may be necessary and voted against making it a felony to beat up a prosecutor or threaten a cop or their family, is one of two Republican candidates running for the chance to unseat Democratic AG Josh Kaul. The other candidate is Fond du Lac County District Attorney Eric Toney.

Under the mandatory minimum law, which passed in 2015, judges had to give felons who repeatedly possess firearms a minimum three-year prison sentence, if they had a prior VIOLENT felony, removing discretion from weak judges.

Adam Jarchow and David Bowen succeeded in ensuring that those mandatory minimums would affect fewer repeat violent felons by successfully getting the Legislature to limit the time frame the mandatory minimums could apply to. As a result of their amendment, the minimums only affected felons who had completed serving their sentence for a previous violent felony within five years.

In other words, if a felon was caught illegally possessing a gun and they had finished serving their sentence for a violent felony, say, six years before that, the minimums could not apply, and it would be up to the judge.

WRN came upon this amendment while researching how Milwaukee County Judge Jean Kies was able to give Lavohn Lee Carter a stayed sentence which resulted in no prison time for a 4th conviction for felon in possession of a firearm. He received probation.

Adam Jarchow and David Bowen successfully pushed the mandatory minimum amendment to Assembly bill 220 in 2015, which passed, and then went to the Senate and the governor, becoming law, although the mandatory minimums expired for all those convicted after July 2020, a sunset provision baked into the original law. In 2020, violent crime, including homicide by firearm, began skyrocketing to record levels in Milwaukee. 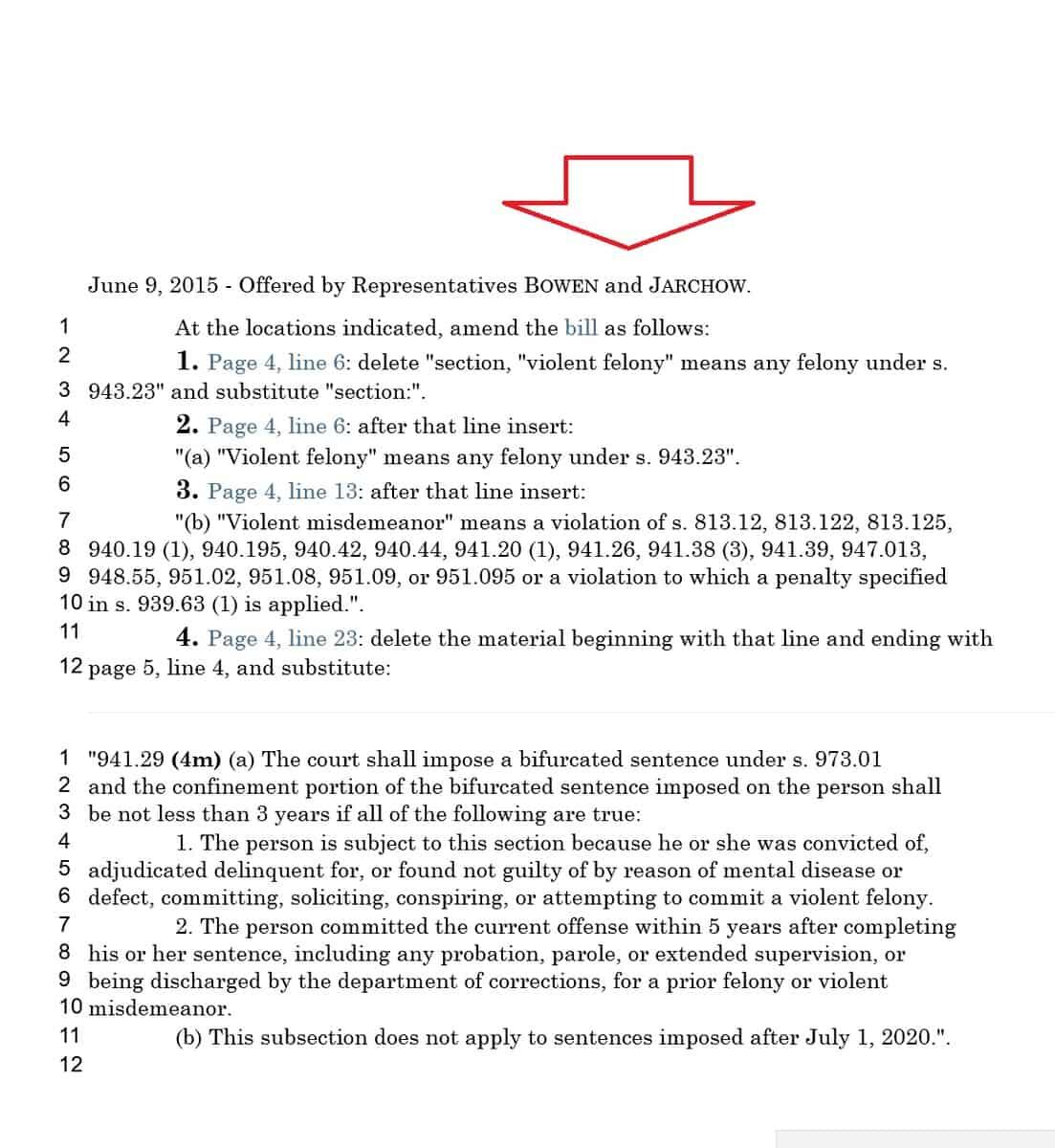 We reached out to ask Jarchow for an explanation as to why he pushed this amendment, but he failed to respond.

A news article at the time, though, indicated that some Assembly members, without naming them, were concerned about the impact on hunters when limiting the law to the five-year window. The law before and after the amendment only applied to people convicted of violent offenses. “Some Assembly members were concerned about hunters who’d been convicted of a violent crime decades earlier but had otherwise clean records,” Fox 6 reported at the time.

At the same time, Adam Jarchow and David Bowen also changed the mandatory minimum law via their successful amendment to include some violent misdemeanors, if they occurred within five years after completing the sentence. 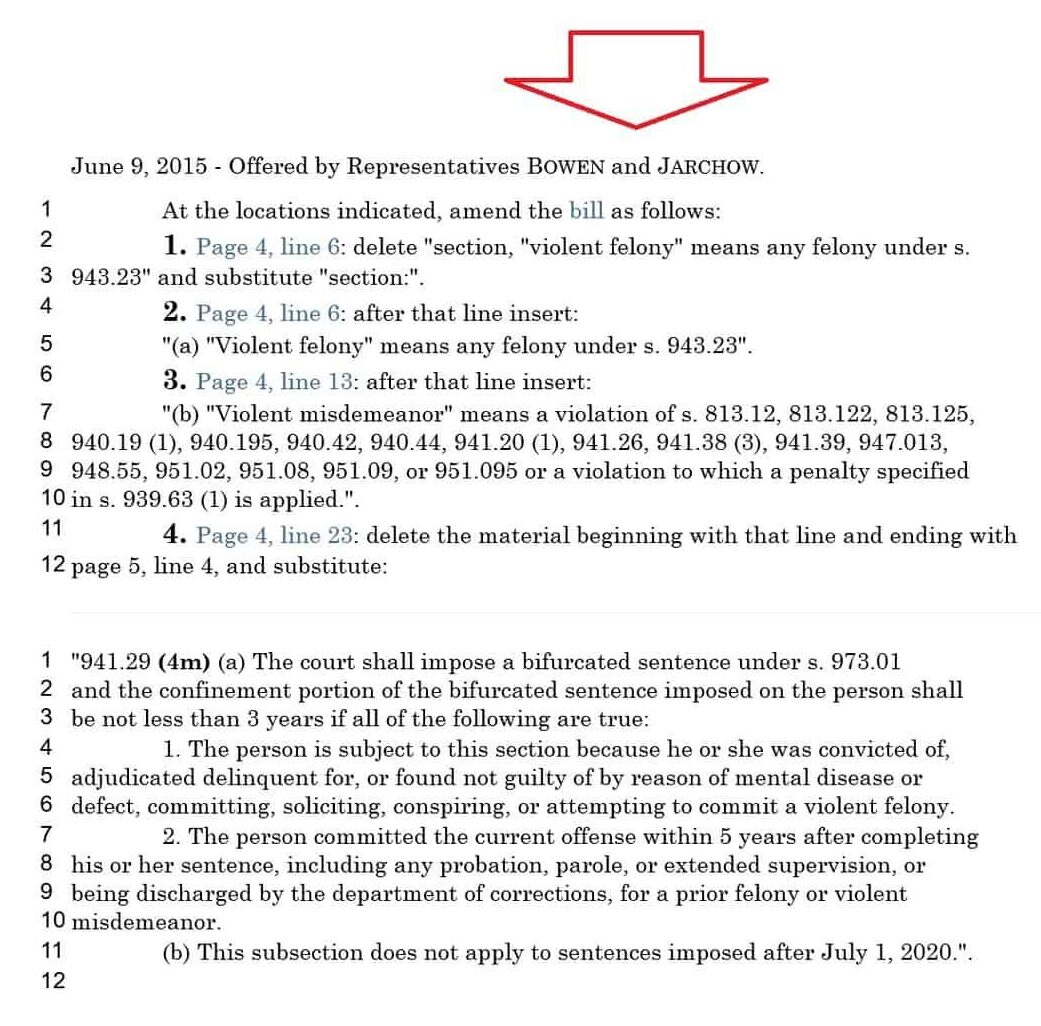 The language before the Adam Jarchow & David Bowen amendment:

941.29 (4m) If the person is subject to this section because he or she was convicted of, adjudicated delinquent for, or found not guilty of by reason of mental disease or defect, committing, soliciting, conspiring, or attempting to commit a violent felony, the court shall impose a bifurcated sentence under s. 973.01 and the confinement portion of the bifurcated sentence imposed on the person shall be not less than 3 years. This subsection does not apply to sentences imposed after July 1, 2020.

The language after the Adam Jarchow & David Bowen amendment:

1. The person is subject to this section because he or she was convicted of, adjudicated delinquent for, or found not guilty of by reason of mental disease or defect, committing, soliciting, conspiring, or attempting to commit a violent felony.

2. The person committed the current offense within 5 years after completing his or her sentence, including any probation, parole, or extended supervision, or being discharged by the department of corrections, for a prior felony or violent misdemeanor.

This subsection does not apply to sentences imposed after July 1, 2020.”

So, for example, a person could have three felon in possession of a firearm convictions but if they were more than 5 years old, mandatory minimums wouldn’t apply, leaving sentencing in the hands of often liberal and weak judges who are former public defenders and/or Tony Evers’ appointee.

Bowen is unapologetically anti-police. However, Jarchow has been running a campaign, including digital ads, that claim he’s “anti-crime” and “pro-police.” 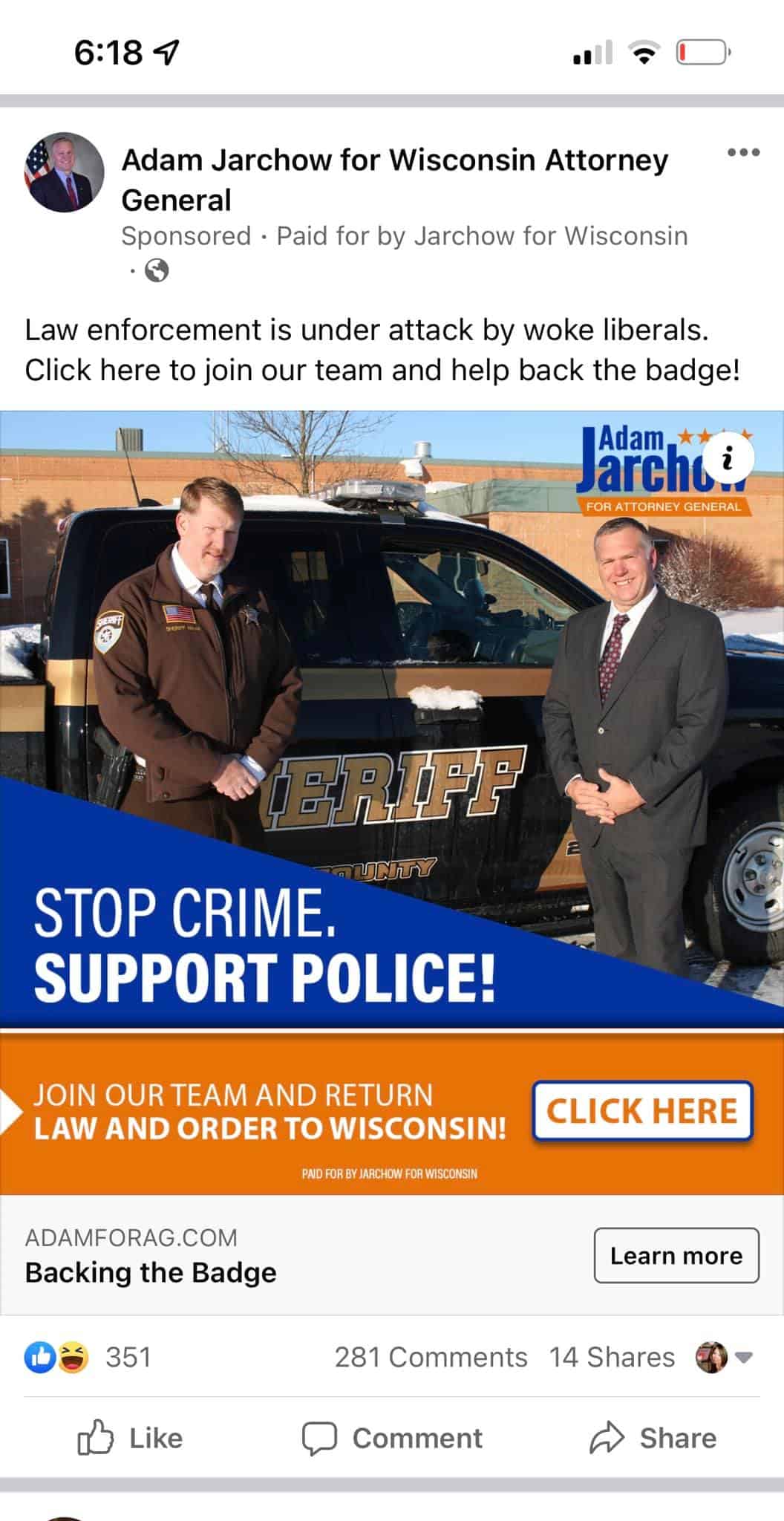 He’s lashed out at Wisconsin Right Now for reviewing, and reporting on, his legislative record and past podcast comments, which have revealed a series of controversial votes and remarks, including:

He voted against making it a felony to assault a prosecutor or law enforcement officer’s family member and to make it a felony to threaten an officer, arguing that it gave special treatment to “lawyers.” After our story on that vote, he falsely implied that then Republican Senate Majority Leader Scott Fitzgerald blocked the bill from passing, when, actually, the state Senate approved an almost identical bill (removing only public defenders); Jarchow voted against that version too.

He trashed the state’s largest police association – the Wisconsin Professional Police Association – for ranking him the second-worst legislator in the state Assembly, even worse than radical Democrats, accusing them of being a Democratic group. Actually, the WPPA has a history of bipartisan endorsements – to be sure, they do endorse Democrats but they also endorse Republicans, notably Republican Attorneys General Brad Schimel and J.B. Van Hollen.

The mandatory minimum amendment provides another window into why Jarchow’s WPPA ranking was so low, but it’s up to you, the voter, to decide what to make of it.

He also was captured on podcasts saying that urban police probably need reforming; acknowledging he doesn’t know much about urban policing; and touting the fact he worked to make fewer crimes felonies during his time in the Legislature, saying,” I spent so much time voting against and fighting bills that turned things into felonies.” He voted against requiring parole revocation when people on parole commit new crimes.

Jarchow has also made comments in favor of ballot harvesting, joked about hunters invading Canada, advocated wearing gloves in bars and restaurants during the early days of the pandemic, deleted a series of old tweets trashing President Trump, and voted to form the Wisconsin Election Commission. However, he’s earned the support of some powerful GOP insiders and donors, largely due to Toney’s COVID-19 prosecutions, which we were the first site to explore, and which you can read about here (Toney did refuse to enforce Gov. Tony Evers’ mask mandate.)

We are committed to exploring the records of the primary candidates to educate voters on their choices; conservatives learned the hard way with the Brian Hagedorn election to Wisconsin Supreme Court what happens when they don’t vet candidates.