Alfonso Morales: 5 Reasons Why He Should Be the Next Wauwatosa Police Chief 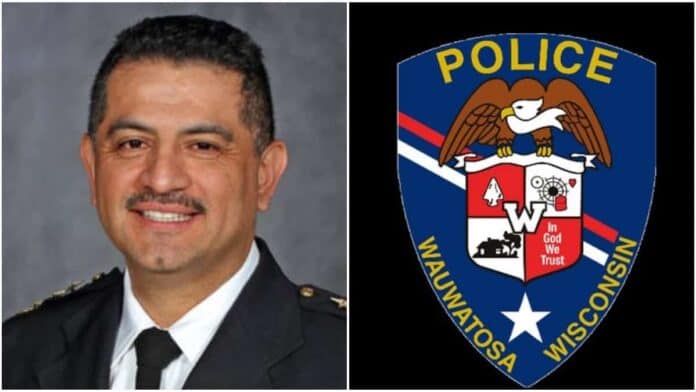 Wauwatosa is currently in the process of selecting a new police chief to replace Barry Weber who has announced his retirement June 1. We think Weber has done a very commendable job during extremely tough times.

We recommend that Milwaukee Police Chief Alfonso Morales applies, and we hope Wauwatosa seriously considers, and selects, him if he does.

Here are five reasons why.

Morales is extremely qualified for the position. He was the Milwaukee police chief; arguably he still is. He was a police captain for MPD before that. He ran a police agency with approximately 3,000 employees and a $300 million budget. He’s actually more than qualified to run Tosa’s police department, but we’re guessing that Morales, with his deep ties to the community, isn’t looking to leave the area.

You can’t fault him for his botched and illegal demotion by the Milwaukee Fire and Police Commission. A judge overturned that because it was utterly without due process and reason – an appalling process and action. You can’t blame Morales, either, for a completely dysfunctional commission’s negative views of him. He did nothing to earn them. Morales got an incredibly raw deal.

According to a 2018 letter from the National Latino Peace Officers’ Association, “As an officer and detective, he was assigned to work crucial units, like the Vice Control unit as an officer and the Homicide unit as a detective which helped reduce crime in the city of Milwaukee.”

The letter states, “As a lieutenant, Capt. Morales worked as a Shift Commander at District Three, Homicide Division, Internal Affairs, the Police Academy and the High Intensity Drug Trafficking Area (HIDTA). These particular areas of work have prepared Capt. Morales to effectively address the most important issues affecting the City of Milwaukee. Capt. Morales’ valuable knowledge of homicide investigations can help address the high homicide rate that we have experienced in the recent years.”

It adds, “Capt. Morales’ experience in the High Intensity Drug Trafficking Area (HIDTA) will greatly benefit the City of Milwaukee in dealing with our current opioid crisis as he commanded a drug gang task force composed of local, state and federal agencies to dismantle violent drug organizations. Capt. Morales also has the knowledge of working at the Internal Affairs Division where he supervised investigations of misconduct of department members and code of conduct violations.”

Morales brings needed diversity to the Wauwatosa force (something the left and protesters claim they want). He is a second-generation Mexican-American.

According to the Milwaukee Journal Sentinel, he is one of 10 children raised in Milwaukee by a Mexican immigrant father. He is also the first person in his family to graduate from college.

He commanded a police district with a large Latino community and “he enjoyed broad support among residents,” according to the Journal Sentinel. He is fluent in Spanish. The newspaper wrote (in a glowing profile when Morales was demoted), “He stayed late into the night to speak in Spanish and English with residents at meetings. He knew every corner of his district and every small business owner.”

The National Latino Peace Officers’ Association wrote, “While Capt. Morales was the Commander of District Two, he made a personal connection with the residents of his district. Capt. Morales is a second generation Mexican-American who can speak perfect Spanish and was able to connect with a part of the Hispanic community that has not been included in law enforcement talks for a long time. The fact that Capt. Morales was able not only to communicate but to have a real connection with new generations of Spanish speaking residents made his connection even more real.”

They added, “Capt. Morales’ mission to improve the diversity within the Milwaukee Police Department was demonstrated by his collaboration and guidance during the duration of this task force. Capt. Morales was able to coordinate with other captains, human resources representatives and officers to create, implement and execute a successful recruiting plan.”

Morales was born in Milwaukee. We keep running across people who have known him for years, including in high school, and they speak of the quiet community work he does behind the scenes. He has deep ties to the community.

Morales graduated from Milwaukee Public Schools and lives in Milwaukee with his family. We once saw him at the mall with his kids; he’s a homegrown guy who is deeply invested in the community he has served.

He is also recognized for being a community volunteer. “Capt. Morales is also engaged with the community as a member of the N.L.P.O.A.-Milwaukee Chapter by volunteering his time off-duty. Capt. Morales volunteers his time as part of our courtesy patrol at the Mexican Fiesta Festival that attracts approximately 100,000 attendees in a 3-day span. Capt. Morales is assigned an area of responsibility along with other volunteers to maintain a safe environment for festival goers,” says the Latino Peace Officers Association Letter.

4. Morales Knows How to Keep a City Safe

He worked homicides as a detective and, many forget, he’s a hero who once stopped an active shooter in a Milwaukee courtroom. He held many leadership positions in MPD: He ran the department’s crisis negotiations unit and its homicide unit. He formed a Special Investigations Unit when he became chief, among other promising initiatives.

If you want an example of Morales’ empathy and character, watch this video on his bond with a man he once lawfully shot on duty:

With too many stories like a man being robbed while blowing snow in his driveway in Wauwatosa, the city needs someone who will strictly draw the line on crime.

The Latino Peace Officers Association letter states, “Capt. Morales was also responsible for reducing external and internal complaints by 50%, helping build trust in the community. Capt. Morales also addressed the prostitution problem that affects certain areas of District Two, by formulating action plans to target both the prostitutes and the Johns that solicit them. Capt. Morales is currently in charge of Project Safe Neighborhoods where prolific gun offenders are targeted to reduce gun violence in the City of Milwaukee. Capt. Morales also conducts non-fatal shooting reviews to identify an action plan to prevent future incidents.”

5. Morales Backs His Cops When They Deserve Defending

As with any profession, there are a few cops who may cross the line. But it has always struck us that Morales understands the difference between those who don’t deserve defending and those who do – and those who are getting unfairly hijacked for political purposes.

He doesn’t seem to tolerate fools lightly. He’s been described as a “cop’s cop” and we think that’s a good thing. In a time when protest groups demand criminal charges against cops who defended their lives against armed suspects, it’s important to have a chief who can discern and who won’t cave to the protest pressure, while still holding those accountable who truly deserve it.

Wauwatosa: Stop looking. You’ve got the perfect candidate for chief in your backyard already: Alfonso Morales.