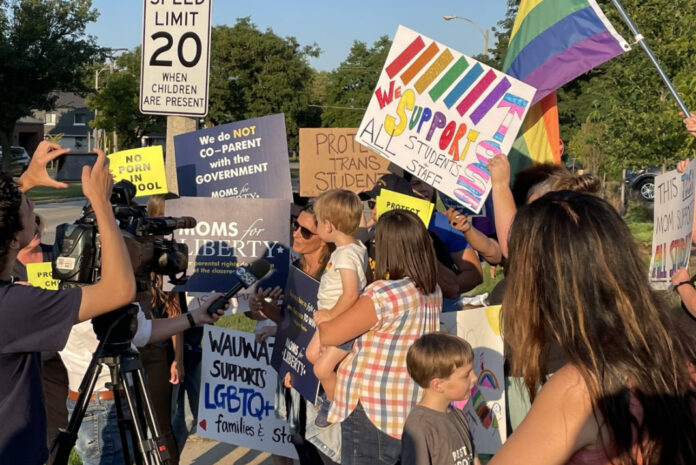 The text said, “Did you see the news?” “No,” I replied. “What happened?” “The district admin gave an illegal contract to AVID.”

Then, PING! “Did you see *Teacher M* is in the news? He was talking to kids about sex and had felonies?

PING! “Check out these fights at Tosa?!”

Another month, another text; it was almost like clockwork. All the stories were about criminality within the Wauwatosa School district. But in August, a different kind of text came in:

Why were these texts getting sent to me? From 2017 to 2021, I taught in the Wauwatosa School District for three years as a Spanish teacher at Whitman Middle School and one year as a Civics teacher at Vel R Phillips Juvenile Correctional Center.

Despite these credentials, like many new teachers, I struggled for the first few years. In my 3rd year, a fellow Spanish teacher told me, “Embrace the Chaos.” It was her way of saying, use middle schoolers’ energy, excitement, and curiosity to your advantage. It was then things started to click for me.

I thought about this sage advice upon researching and viewing social media posts on the new Comprehensive Sexuality Education curriculum adopted by the Wauwatosa School District on August 22nd, 2022. My initial thoughts likely differed from the average person, sure, I was filled with shock and disgust, but as a former 6th-grade teacher, I couldn’t help but wonder, “What would this curriculum look like in a middle school classroom?” I am sure many parents are asking themselves the same question.

The best way I can answer this question is to describe a 6th-grade Spanish Unit introductory lesson plan and then apply this model to sex education. I promise there will be no verb conjugation charts or subjunctive-I wouldn’t want you to have nightmares. Bear with me.

The second unit in 6th grade Spanish at Wauwatosa is School Unit. How did we introduce, present, and teach those concepts as teachers?

First, we would start with basic vocabulary around classes and school objects- la clase de inglés, las ciencias, el lápiz, el libro, etc. We’d practice pronunciation and maybe look around and point to classroom objects. Most units in any subject revolve around a set list of vocabulary.

Second, students would practice with a district-provided set of flashcards and make their own slapjack game.

Third, we often played a game with whiteboards to ensure our visual learners were covered. Students pair up in teams of two, and in the first round, I say and pick a school object; students get 1 minute to draw the object on a whiteboard. The group with the best drawing wins, then they, as a group, get to come to the front and pick a new word and are the judges for the next round. (If you can envision this activity, it is fun, competitive, and engaging. I’ve taught this activity to other teachers, and they loved it.) We would finish the day with students forming a line, answering ¿Cuál es tu clase favorita?, and then exiting the classroom.

If you’d ask me for a lesson plan, it would look like this:

To reiterate, this is the plan for day 1 of the school unit. The curriculum is covered simply by demonstrating an understanding of some basic vocabulary and answering one of the main questions of the unit. We haven’t even touched grammar, individual or group projects, or assessments.

The question is, how did I get there in just this lesson? As the teacher, I used the approved district curriculum in activity one but with some play on it- looking around the room for objects and having specific students verbalize each vocabulary word.

Activity two is district approved, but I, as the teacher, created a Slapjack vocabulary game to be used in upcoming lessons.

Activity three is 100% teacher-created. Another teacher teaching the same class might not use the activity.

Activity four is pretty simple, but again, as the teacher, I decide what we, as a class, will do.

As a UW-Oshkosh education graduate and nine-year teacher at Wisconsin public schools, this is the way. The Wauwatosa school district dictates the learning objectives, and the teacher has about 80% autonomy on teaching said goals. Imagine the micromanaging by the administration if every minute of every lesson was planned for a teacher.

As a Wauwatosa Middle School teacher, I wasn’t asked to provide daily or weekly lesson plans. Throughout the years, district administration and Wisconsin DPI determine a class’s core objectives and summative assessments. In the case of Wauwatosa, it was up to the teacher’s discretion how to meet those objectives.

With that in mind, let’s apply the Sex Education Curriculum to the same 6th-grade level classroom using the same lesson plan. These are the objectives for the class:

Next, students would practice with flashcards and make a slapjack game by writing down the definitions again. Research shows writing down descriptions helps reinforce understanding and recall of terms. Furthermore, all districts push for working in “diverse” groups. I don’t know how students quizzing their partners in class on vaginal sex would go, but that is the objective.

Finally, imagine students as they are asked by the teacher on the exit ticket, “What is a pansexual?” “What is a two-spirit?” “Can you describe vaginal intercourse?” “What is oral sex?” Disgraceful.

I read the letter to the administration, written by many former colleagues, calling for implementing comprehensive sex education. I know on a very personal level some of the teachers who signed the letter. In it, they smear any community members who’ve made comments as “bigoted,” “transphobic,” and “queerphobic.”

Take it from a former educator; Once a teacher has embraced this level of hatred for opposing viewpoints, they are no longer of sound mind and cannot be trusted with the care of your children.

Strip away all the educational jargon, fancy slogans, and “expert” advice, and the Wauwatosa Human Growth and Development curriculum, or Comprehensive Sex Education, is filth, disturbing, and WRONG.

This is one former teacher who will not “embrace the chaos.” I hope others will join me and stand with the children. They deserve better, and parents are entitled to know the truth.