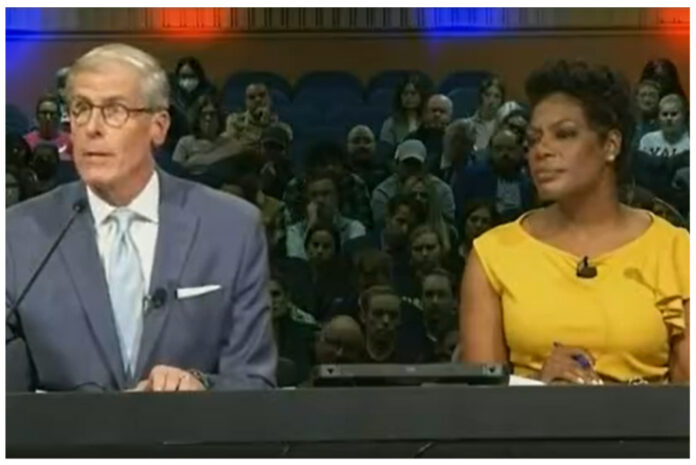 That’s it. Republicans need to stop agreeing to biased debates. Enough is enough.

The Wisconsin media have demonstrated egregious bias during this election season, and it’s time to stop helping them pretend they’re objective.

Insist that at least one of the moderators be Dan O’Donnell, Meg Ellefson, Regular Joe, Vicki McKenna, Brian Schimming, or Mark Belling.

Better yet have a full debate on one of their shows. The MacIver Institute or Wisconsin Right Now could also host.

If the liberal candidates won’t agree to show up, conservative candidates don’t show up at theirs. Time to play hardball. This has been a long-standing problem.

It’s time for Republican candidates to stop allowing the media to get away with this “we’re the objective ones” fraud. Not doing any debates would be a better option. They’re not even trying to hide their agenda anymore.

Mark Belling warned of this in September. He offered the debate organizer, Michelle Vetterkind, to be a panelist for Friday’s gubernatorial debate, but she smugly didn’t take him up on it. “You did not answer my question about what steps WBA is taking to ensure that it is putting on a fair debate,” Belling wrote her. “Did WBA consider ideological diversity in its panel selection? I note WBA chose a panelist from a radio station whose ratings are virtually non-existent but consistently runs programming from a leftist point of view. What conservatives did WBA consider for its panel? Were any offered the opportunity to be questioners?”

The debates have not been fair, as Belling predicted.

Moderator Charles Benson then asked a ridiculously biased question on paroles. He didn’t ask Barnes, “why do you think it’s sexy to reduce the prison population? Do you condemn your administration’s release of a man who cut his wife’s head off and burned it in a stove?”

Instead, Benson mumbled something about other governors also paroling people (so what? their appointees rejected the parole applications of these people). Benson asked Johnson about the First Step Act, which reduced the sentences of federal crack offenders, not people who chopped their wife’s heads off or slashed the throats of women they tossed in manure pits. And so it went. In snarky tone, the follow-up questions always seemed directed at Johnson.

Then, the Wisconsin Broadcasters Association unleashed on Republican candidate Tim Michels a series of hysterically slanted questions designed to help Gov. Tony Evers. Minimally, they fortified the narratives Evers wants the election to focus on. Evers came across as sleepy, weak, and utterly lacking passion, but the questions favored him.

What else are we to make of a question that basically asked, we have this massive surplus, what will you do with the money? Another question started, “Climate change is already affecting Wisconsinites…” and segued into a riveting discussion of wild rice. This led Michels to proclaim he didn’t know anything about wild rice.

How about asking Evers about other things affecting Wisconsinites, like delays in licensing, past delays in unemployment benefits, and problems at veterans’ homes?

The biased moderators launched the debate on crime by asking about gun proliferation, not criminals, to lead the candidates toward debating gun control. On abortion, they wanted to know about prosecuting people who cross state lines, but they didn’t ask Evers about not signing a bill on abortion exceptions. They asked about violence prevention, not emptying out the prisons by 50 percent. And so it went.

They asked a conflict of interest question clearly designed to trip up Michels and then pretended they cared what Evers had to say about conflicts of interest, knowing full well that no one is asking him about any.

The follow-up questions always favored Evers. No moderator asked him why he was babbling about shared revenue when asked about paroles or how he did enough in Kenosha when a credit union, small businesses, and a government building burned to the ground.

They didn’t ask why Evers reappointed Parole Commission Chairman John Tate after Tate had been releasing brutal killers and rapists for years. Or whether he condemns the release of these other killers. When Evers tried to paint the victim notification problems as being about a single case, they didn’t point out that multiple victims’ families have said the same thing as the victim’s family in the Balsewicz case. Evers said he asked Tate to resign because “he did not take victim rights into account for 1 particular case.”

The WBA shared an incomplete, biased parole “fact check” that basically regurgitated the Journal Sentinel and Evers’ misleading press release. It didn’t include the fact that Evers’ Department of Corrections failed to notify multiple murder victims’ families of killers’ paroles or explain who was released. They never asked Evers why his DOC put one paroled killer in a home functioning as a DAYCARE. See our Evers’ parole fact check here.

The debate concluded with Evers babbling about not sleeping late.

Look, they don’t agree to appear in our forums. Stop appearing in theirs.