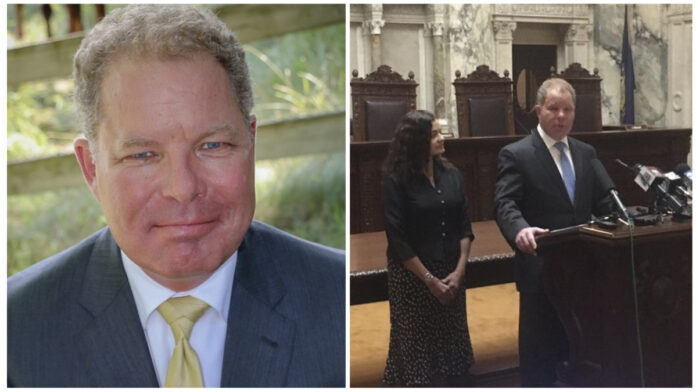 This coming spring election, I will once again be a candidate for Justice. I’d like to begin that journey by laying before you the reasons for my candidacy.

Benjamin Franklin walked out of Independence Hall 235 years ago after signing what would become one of the most famous documents in all human history — the United States Constitution.  Upon leaving the building, he was asked: “Well, doctor, what have we got?  A republic or a monarchy?”  “A republic,” Mr. Franklin said.  And then, almost certainly with a twinkle in his eye, he added, “if you can keep it.”

If you can keep it, indeed.

I’ve learned over the years that you only keep what you treasure. During the several years I spent as one of your Supreme Court justices, I lived this truth by keeping faith with both our state and federal constitutions. I am proud to stand in a long line of judicial conservatives who have understood that the first imperative of our constitutional republic is the rule of law, which preserves our fundamental rights.  We need look no further than the very first provision of the Wisconsin Constitution to find this proposition in the poetry of a self-governing people:

“All people are born equally free and independent and have certain inherent rights; among these are life, liberty and the pursuit of happiness; to secure these rights, governments are instituted, deriving their just powers from the consent of the governed.”

But not everyone treasures our constitutional republic.  At least not the one described by the actual words adopted by the authors.  There are those who demand that the court take for itself an active role in developing Wisconsin’s public policy, rather than just using the law that already exists to resolve the disputes that come before it.  They justify their activism by lamenting their inability to get legislators to agree with their preferred policies, or the slowness
with which legislative proposals move through the process.  Whatever the reason, the result they want is the same — public policy mandated by four lawyers sitting in a Madison court room.

That’s precisely the result two of my opponents want. They aim to reinvent our Supreme Court as a haven for judicial activism where they can impose their political agenda on our state, all while denying your right to steward Wisconsin’s public policy through your legislators. They wear their politics on their sleeves and have publicly supported those who want to defund the police and let convicted felons out of prison.  And they’ve done this while serving in the judiciary!

We can’t pursue happiness, or exercise our liberties, if judicial activists take over the Supreme Court and interfere with efforts to make our communities safe and free. It is imperative that we elect a judicial conservative who will uphold the rule of law, the foundational principle that gives us the chance to live together in peace and prosperity.  That’s exactly what I’ll do as your Supreme Court justice.

That’s not just a promise, it’s what I have already done. The scores of opinions I authored during my service on the Supreme Court stand as witnesses to my commitment to our constitution and the rule of law. You will remember, perhaps, when the Evers administration issued an order confining people to their homes and shutting down businesses, churches, and
schools all over the state.

When the matter came to the Supreme Court, I was one of only four justices willing to uphold the rule of law and say that the executive branch’s action was unlawful. The order, I explained, stole the authority that our constitution gives to our legislators. Had I not been on the court, one can only wonder how long the unlawful order would have continued robbing our fellow Wisconsinites of their right to pursue happiness and exercise their liberties.

This coming spring election, we will decide which vision of the court will prevail. Will it be aggressive activism, or instead the humble, constitution-preserving role you have assigned to the judiciary?  As Mr. Franklin might ask, do we treasure our constitutional republic? Will we keep it? This responsibility, the keeping of the republic, did not belong to Mr. Franklin’s contemporaries alone.

It persists from generation to generation and calls to us even today.

If you treasure the Wisconsin Constitution as I do, I invite you to join me in my campaign for the Supreme Court.  It won’t be easy, and the amount of work we need to do is not for the faint-hearted. But I can promise you this: there are few things more satisfying than spending oneself on a worthy cause.  I’m quite certain that preserving our constitutional republic is such a cause, and I’m equally certain this generation will confidently and enthusiastically rise to answer Benjamin Franklin’s challenge.

We previously ran a column from Judge Jennifer Dorow, the other conservative candidate in the race. Read it here.>