EXCLUSIVE: Drunk Driver Accused of Killing Racine Nurse, 20, Is Not A US Citizen, Has Immigration Hold 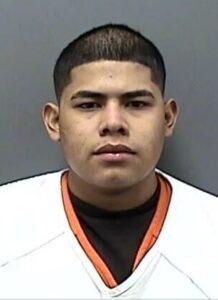 Why isn’t the media reporting this?

Ernest Regalado Rodriguez, the accused drunk driver charged in the crash that killed 20-year-old nurse Johanna Pascoe in Caledonia, Wisconsin, has an immigration hold in the Racine County Jail, according to records obtained by Wisconsin Right Now.

Regalado Rodriguez, 21, of Racine, is charged with homicide by intoxicated use of a motor vehicle in the crash that killed Pascoe earlier this month. He could receive 33.5 years in prison.

According to police, Rodriguez had a blood-alcohol level of .199, two and a half times the legal limit.

Pascoe was on her way to Aurora St. Luke’s Medical Center in Milwaukee where she worked as a nurse.

Typically, such immigration holds are placed on accused criminals if they are in this country illegally. Regalado Rodriguez is being held on $500,000 bail. The hold means that, if he were to post it, he would be released into the custody of federal immigration authorities.

Caledonia Deputy Chief of Police Shawn Engleman told WRN that Rodriguez said he arrived in Wisconsin from Mexico three years ago and that he is not a US Citizen. He did not have information on the hold or Rodriguez’s immigration status; the jail is run by the Racine County Sheriff’s Department, which confirmed its existence but did not comment further.

Regalado Rodriguez’s immigration status has been ignored by the media. Court records show that he required an interpreter at his bail hearing. A witness told police he was almost struck by Regalado Rodriguez before Pascoe’s vehicle was struck.

Meanwhile, loved ones and the community mourn the loss of a promising young nurse who had just graduated.

A GoFundMe page to help raise funeral costs for Pascoe has accrued more than $30,000.

“On December 12, 2022, Johanna Pascoe, only 20 years old, was the victim of a severe car crash on Hwy 32 in Caledonia, Wisconsin involving a drunk driver who crossed the center line of the road, leaving her with nowhere to escape impact,” it reads.

“When police arrived, she was stuck in her vehicle and needed to be extricated, where she was found with no heartbeat. First responders were able to get her heart pumping again, and she was taken to the hospital by Flight for Life where she remained in critical condition. During her time in the hospital, she never regained consciousness and showed no signs of brain activity. She was taken off of life support on December 13 and succumbed to her injuries very quickly.”

A man who donated wrote, “No matter when I saw her, Johanna was one of the sweetest happiest young ladies I’ve ever met. May she rest in peace with the angels!” Wrote another: “My daughter…was her study partner. They both graduated on Friday as RNs, it broke my heart when she told me what had happened.”

Johanna Pascoe’s obituary says she died at the hospital on December 13, 2022.

“Johanna had just started her career in the Nuero ICU at Aurora St. Luke’s, Milwaukee as an extern nurse. She recently graduated from Gateway Technical College with an Associate Degree in Nursing and was awaiting state licensure to become a full-time RN. ”

“She never had the chance to receive her diploma (to be awarded May 2023) but participated in the Nurses Pinning Ceremony on December 9, 2022. She had previously worked in Med-Surg as a CNA at Froedtert South, Kenosha, as well as at local-area nursing homes. In her high school years, she was manager at Culver’s in Burlington and Kenosha.”

“Johanna had a very charitable heart and recently donated her time to volunteer for Tiny Hooves Animal Sanctuary. She regularly participated in blood drives and had volunteered for suicide prevention fundraisers. She lived her life by the words “BE KIND” and was a vocal advocate for any person or creature not receiving kindness.

Johanna had a genuine zest for life. Her adventures were numerous and hobbies endless because she was always ready to say “yes” to an invite. She cared deeply about animals and nature. She took great care of her extensive collection of houseplants and her axolotl Fern. She loved taking pictures, preferring analog instant film cameras – especially when they were found at one of the local thrift stores she regularly frequented. Exceptionally creative, she made the space around her beautiful in so many ways. You could often find her painting, making jewelry or doing crafts with her nephews. She enjoyed food with a passion, always offering to make multi-course meals with extravagant desserts for her loved ones. She usually showed up with ice cream to share. She looked most forward to summer, excited to hike, camp, and attend annual electronic music festivals. She especially cherished her time spent in the U.P. where her grandparents live in the woods on the lake, which she considered the most beautiful and magical place in the world.

Johanna will always be remembered for her shining energy. Her positivity was radiant and infectious. Her laughter came easy. She was a great listener who was intuitive and receptive. She always knew how and when to help those around her and was always actively looking for ways to make things better. She dreamed big and was exceptionally driven, accomplishing whatever she set her mind to. She inspired many and she will be deeply missed.”