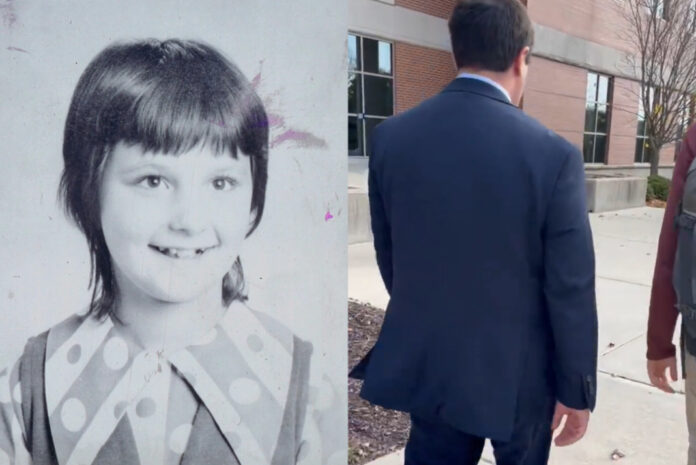 Maryann Gehring, the mother of 9-year-old murder victim Lisa Ann French, says it “was like a slap in the face” when Attorney General Josh Kaul walked away without response on video after being asked about Gehring’s comments that he failed her.

“He doesn’t want to tell the truth. He hurt my feelings,” she said, adding that she didn’t appreciate his comments basically accusing her of playing politics.

She wants people to vote instead for Eric Toney, the Republican District Attorney of Fond du Lac County, because she believes he’s more attentive to victims. “He’s caring,” she said of Toney. “He cares about the victims. He’s there for justice. He’s not really a politician.” We spoke to Gehring in an exclusive interview.

Here she speaks about the fact the media have ignored her previous comments that Kaul had failed her, and she discusses her feelings about Kaul’s non-response.

“I knew he (Kaul) doesn’t care about the victims at all. I thought he’s showing his true colors right there,” Gehring told Wisconsin Right Now in an exclusive interview of the moment Kaul walked away on video. See that video here:

Gehring’s 9-year-old daughter was raped and murdered while trick-or-treating in Fond du Lac County by Gerald Turner, the infamous Halloween Killer. It’s one of the state’s most notorious cases, and it changed state law as well as how communities handle Halloween all over the nation. Kaul’s office is handling ongoing civil commitment proceedings to keep Turner off the streets; they were started by former Republican AG Brad Schimel with help from Toney, who is running against Kaul for AG.

Gehring also criticized the media for ignoring her comments of Kaul, saying the news media hounded her for years to get comments on her daughter’s murder but then suddenly stopped when she criticized Kaul with the election looming. Maryann described Lisa Ann as a caring, loving little girl. She revealed that Lisa left behind a series of notes that read, “a gift to you from God.” The 9-year-old girl had written a series of Bible phrases. We will share some of those notes throughout this article.

“I was surprised. Normally, when it’s not an election year, they’re always calling me,” Gehring said of the media.

She has been watching the stories of Tony Evers’ appointee paroling other killers and is concerned that Evers and Kaul don’t prioritize victims. She fears that Turner could get back out someday.

Gehring has appeared in an ad for Toney, saying that Kaul failed her and failed victims. We asked Kaul outside a Madison debate about her remarks, and that’s when he turned his back and walked coldly away, without any response. Then, in the debate, he was asked about Gehring’s ad, and wrote off her feelings as simply politics.

We asked her about that too:

“Well, if he (Kaul) thinks I was playing politics, he should have contacted me and given me some information that I needed,” she said. “He didn’t, so therefore he’s not doing his job, and Eric Toney will be the one to do the job that needs to be done for the victims.”

Gehring said that, although she has had some contact over the years with Kaul’s office, she has never spoken to the Attorney General himself, and she does not feel that the office kept her informed enough about what was going on with the case. She would learn about hearings from people on Facebook at times. Overall, she was left feeling somewhat ignored and not updated fully enough.

“I never spoke to him at all,” she said of Kaul himself. “The only way I found out is people on Facebook that I didn’t even know would contact me and tell me there’s a hearing. I would call the Attorney General. I’d call Josh.” She said she received no response from Kaul himself, although, as noted, she did have contact with his office at times.

Frustrated, she turned to Eric Toney for help instead.

“I called Eric Toney, and I asked him if he knew what was going on with the hearing,” she said. “He was at some meeting, somewhere in Milwaukee or wherever, and he said he would call his office, and they would find out what was going on. It wasn’t his responsibility, but he found out, and he called me within an hour or two. He was always there to help.”

It wasn’t Toney’s case; it was Josh Kaul’s case, but she said she got more information from Toney. She said that, when she learned Turner might get out again, she had contacted Toney and he worked with then AG Brad Schimel to keep Turner committed.

Asked what kind of response she was looking for from Kaul, she said she wanted him to be more attentive to her concerns and keep her informed about the case better.

Gehring repeated that she doesn’t believe Kaul is focused enough on victims.

“I think he doesn’t care about the victims. All he cares about is power, that he wants to run for Attorney General again,” Gehring noted. “He just didn’t want to face the fact that he knew he would be lying if he said that I never called.”

In contrast, Gehring said that, when she called Toney, he got her the information she needed. She was able to easily reach him, and Toney spoke to her himself.

Of Kaul, she said, “I want him out of there. He hasn’t helped me. I want someone in there who will be responsible and work for the victims too. He’s not doing that, and Eric Toney has.”

The reason she cares about not receiving more information from Kaul or direct attention from him is because it “makes me feel he doesn’t care whether Turner is out or not.” She worries he won’t aggressively work to keep Turner off the streets.

“I would be in fear for other people, for other children,” if that ever happened, she said.

She recently posted a story on the Evers’ appointee’s paroled killers on Facebook, writing, “Please help me keep Gerald Turner’s picture from joining these released killers. Eric Toney will keep him locked up, to make our streets a little safer. Vote for Eric Toney!”

Gehring said she deals with renewed trauma over her daughter’s murder every Halloween, seeing decorations around communities, and remembering what happened to the little girl who knocked on the killer’s door in a hobo costume.

What does she want voters to know? “Josh Kaul has got to call it quits. He’s not doing his job,” she said.