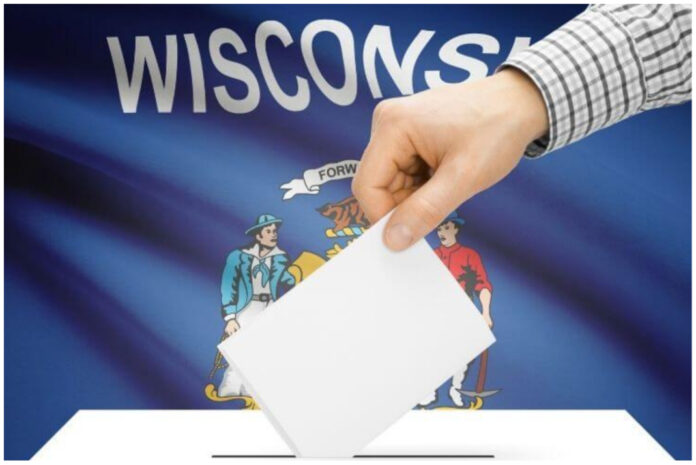 The Thomas More Society filed documents on November 4, 2022, asking the Waukesha County Circuit Court to issue a temporary restraining order and temporary injunction, ordering the state’s elections officials to sequester all military absentee or mail-in ballots prior to the election.

Kimberly Zapata, 45, was charged with misconduct in public office and three misdemeanor counts of making a false statement to obtain an absentee ballot.

Just days before the Midterm Election, Wisconsin veterans and voters are suing the Wisconsin Elections Commission over the mishandling of military absentee ballots.  The purpose of this is to verify that those ballots are authentic and not fraudulent, such as the three military absentee ballots recently sent by the since-fired deputy administrator of the City of Milwaukee Election Commission to the home of Wisconsin State Representative Janel Brandtjen (R-Menomonee Falls), who is Chairman of the Wisconsin Assembly Committee on Campaigns and Elections. The action was taken on behalf of Concerned Veterans of Waukesha County and several named voters, including Brandtjen.

“This is the latest in a host of complaints filed against the Wisconsin Election Commission,” explained Thomas More Society Special Counsel Erick Kaardal, who is working alongside former Wisconsin Supreme Court Justice Michael Gableman, now Senior Counsel with the Thomas More Society.

Kaardal related how the legal action resulted from an incident reported to the Waukesha County Sheriff’s Department on October 28, 2022.

“Representative Brandtjen received the three fraudulent military ballots at her home address,” Kaardal recounted. “None of the individuals to whom these ballots were addressed reside, or have resided, at her address. Upon investigation, the ballots were found to be classified as military absentee ballots, and were originally mailed by municipal clerks in Menomonee Falls, Shorewood, and South Milwaukee. All three ballots were addressed to voters identified by the first name ‘Holly.’ Those identical names– along with the concurrent arrival of those ballots at Brandtjen’s home– make it likely that those voters don’t actually exist.”

“The Wisconsin Elections Commission’s consistent disregard for the state’s election statutes has created an environment conducive to vote fraud,” stated Kaardal, who served for ten years as a Field Artillery Captain in the United States Army and with both the Illinois and Minnesota National Guard. “This situation is particularly egregious as it demonstrates how easily the military absentee mail-in vote can be manipulated due to the commission’s lack of compliance with Wisconsin election law. What a disgraceful way to dishonor our military service men and women and our veterans; by allowing their voting privileges to be abused.”

“Wisconsin Statutes 6.22(6) requires a ‘military elector list,’ which is up-to-date, complete, verified, current, accurate and distributed,” Gableman detailed. “Each municipal clerk is required, under Wisconsin election law, to maintain and distribute an up-to-date, complete, verified, current, and accurate roll of all eligible military electors who reside in the municipality. Yet, the Wisconsin Election Commission’s guidance to clerks on military absentee ballots does not require any of those standards to be met, nor does it even mention a ‘military elector list.’ Rather, the Wisconsin Election Commission has told clerks that military voters who choose to register can do so in person or online and need not provide any proof of residence to do so.”

Gableman concluded, “By its refusal to implement the most basic level of security required by law, the Wisconsin Elections Commission has been permitting an elections system which facilitates the procurement, manufacture, and distribution of fraudulent ballots. This inexcusable failure must end.”

About the Thomas More Society

The Thomas More Society is a national not-for-profit law firm dedicated to restoring respect in law for life, family, religious liberty, and election integrity. Headquartered in Chicago and with offices across the country, Thomas More Society fosters support for these causes by providing high quality pro bono legal services from local trial courts all the way up to the United States Supreme Court. For more information, please visit thomasmoresociety.org.

The Thomas More Society officially launched its own Election Integrity Initiative in 2022 to preserve and protect Americans’ sacred right to vote against those who would use money or other illegal means such as conditional “gift” or “grant” agreements to distort, evade or compromise electoral laws and safeguards.