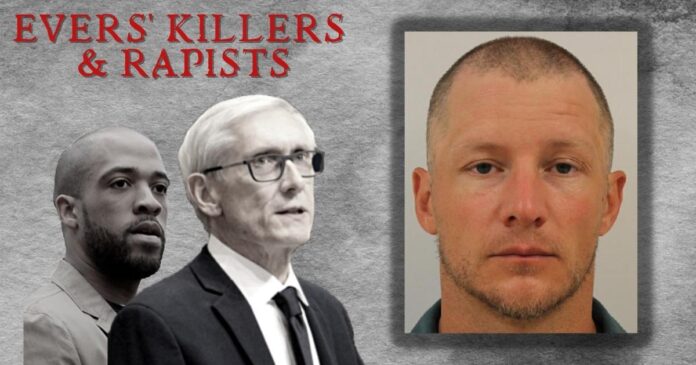 Dustin Sachsenmaier is a registered sex offender who was released early from prison through the state’s earned release program, even though local police stressed his dangerousness.

Before Dustin Sachsenmaier, a registered sex offender, was sentenced to 6.5 years in prison in 2018, Cornell Police Chief Brian Hurt did something he had never done in 30 years. He decided to address a court at sentencing to underscore how dangerous and violent he believes Sachsenmaier is.

“I’ve worked in law enforcement for 30 years. During this time, I’ve never addressed the court on any criminal case I’ve been involved in. I will make that exception for Dustin Sachsenmaier,” Hurt told the judge, according to an article in the Eau Claire Leader-Telegram by reporter Chris Vetter.

“Dustin Sachsenmaier is a very dangerous person. He has been involved in more than 30 criminal cases in recent years. I’ve also been threatened by Dustin Sachsenmaier. I’m not afraid of him — just cautious,” said Hurt.

The article says that “Hurt claimed that Sachsenmaier attempted to hire someone to have him killed.”

“There are also numerous reports on him being involved in drugs in western Wisconsin,” Hurt said. “Dustin Sachsenmaier is nothing less than a local mob boss. This person has no remorse for what he’s done and has no regard for the law.”

Sachsenmaier does have a violent past. In one of his past cases, Sachsenmaier was found guilty of beating a man, threatening him with a gun and saying he would be hanged, according to the Chippewa Herald.

The story says he and a man “struck and kicked another man in a garage, using a tool and steel-toed boots while administering the beating.” The victim lost consciousness, suffering a “partially collapsed lung, a concussion and deep torso and knee bruising,” the Herald reported.

Sachsenmaier hung a rope in the garage and said he would hang the victim, the article states.

He has also been accused of domestic abuse in the past, including knocking a woman down and driving at her with his truck.

The article says that other police agencies also attended the sentencing.

However, despite all of this, Sachsenmaier, 39, was freed early from prison under a program that Gov. Tony Evers has championed and expanded. He lives in Jim Falls.

Date paroled: April 28, 2022 (earned release parole grant)  [You can look up  parole here. Put his name in the database and click “movement.”]

Convicted: A series of crimes. See below.

What the Criminal Did:

Sachsenmaier was released early from prison as a result of the state’s earned release program.

That’s a discretionary program that is supposed to be for substance abuse offenders in prison, but we found previously that offenders people would consider violent have been released early under it, and 40% re-offend in 2 years time.

The earned release of Sachsenmaier was included on the Parole Commission’s list of 2022 parole grants and parole commission actions. The media have mischaracterized the earned release “parole grants” as “non-discretionary.” They have misled the public into thinking Evers has nothing to do with them.

In fact, it’s a program that Gov. Tony Evers and his Department of Corrections expanded, and DOC makes a host of discretionary judgment calls regarding inmates who get into it, including determining whether an inmate is suitable for the program.

A judge sets eligibility and reviews the grant, in this case at the request of DOC, and the Parole Commission signs off on whether eligibility was met and programs completed. We are featuring Sachsenmaier on our list to highlight the earned release portion of the parole grant list; we believe that the type of criminals being freed early under earned release might surprise people because it’s been dishonestly painted by Democrats as a program for non-violent offenders.

Sachsenmaier is a post truth in sentencing inmate; the state eliminated parole in 1999, but people are still being released early under earned release.

The Department of Corrections lists Sachsenmaier as being “paroled” on April 28, 2022.

“This has been a long time in not following society’s rules,” said Newell.

A host of law enforcement, including the Stanley police chief and Chippewa Falls Police Department, and deputies from the Sheriff’s Department, showed up “to make a point that Sachsenmaier deserved punishment,” the article says.

Here are his court cases, including, in bold, the two for which he was freed early from prison:

2003: Dunn County, sexual assault of a child as a habitual criminal felony

2016: Chippewa County, felony bail jumping– Earned release (released early)
On April 25, 2022, in that case, court records read, “from DOC re: proposed Amendment to Judgment of Conviction and Order (sent for review).” The court records say ERP (earned release program) was then granted.
That’s despite the fact that many serious charges were “read-in” at the time of sentencing. That means they could be considered at sentencing but he wasn’t convicted of them. They included battery, intimidate a victim, and second-degree recklessly endangering safety, some relating to domestic abuse.2016: Chippewa County, substantial battery (other charges read-in, including possession of a firearm as a felon, intimidating a victim, and bail jumping.)

2017: Felony bail jumping, misdemeanor disorderly conduct – Earned release (released early
The court records for April 2022 read, “from DOC re: proposed Amendment to Judgment of Conviction and Order (sent for review).” ERP was then granted by the court.