Evers’ Pardon Binge: He’s Issued 41% of All State Pardons Since 1979; Rate of 7 Times of His Predecessors 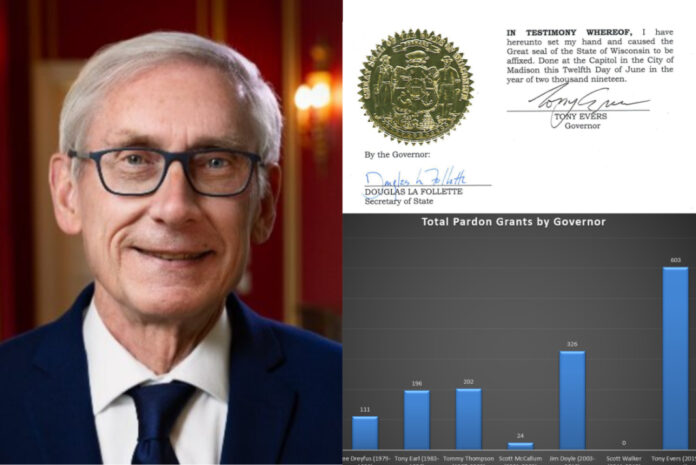 One pardoned man was hired to be a Milwaukee police officer.

In just four years, Gov. Tony Evers has granted more than 41% of all of the pardons granted in Wisconsin history since 1979. He’s issuing pardons at a rate of 7 times more than his predecessors. Evers has been using his unfettered pardon power to wipe out people’s lengthy criminal histories, even the records of some habitual criminals.

Evers has granted more than 600 pardons in his term. That’s nearly double the numbers of the closest governor, another Democrat, Jim Doyle, who served twice as long. Evers’ pardon binge is another piece of the governor’s soft-on-crime philosophy; he has also expanded early release programs from prison and appointed a Parole Commission chair who freed some of the most brutal killers and rapists in state history. He has begun reducing the prison population after pledging to do so by 50%.

Pardons are different than paroles. Evers has sole authority over pardons in the state, and he’s been on a pardoning spree. Republican Gov. Scott Walker famously granted zero pardons during his tenure.

Prior to Gov. Evers taking office, there had been approximately 859 pardons granted from 1979 through 2018 for a monthly average of 1.9 pardons per month.

Evers is granting pardons at a rate of more than 7 times the average of his six predecessors.

Although many were pardoned for drug offenses, burglaries and theft, Evers’ pardon binge include many armed robbers, weapons offenders, arsonists, child abusers, people who committed assault, and more.

About 12 percent no longer live in Wisconsin. In one case, the victim of an armed robber, who threatened to kill her, expressed outrage over the pardon. “He’s not entitled. I don’t care if you better yourself,” that victim told WKOW-TV when Adam Henning was pardoned by Evers.

In another case, a man Evers pardoned on a felony marijuana dealing conviction, Doyle Sprewer, was hired to serve as a Milwaukee police officer. Sprewer, a pastor, holds informational events about obtaining pardons around the community. He has bachelor’s and master’s degrees in religious education and also worked as a probation and parole agent.

Some of the crimes are very disturbing. One man was pardoned for lewd and lascivious behavior.

We think Evers has misled the public on pardons. Reading his press releases, you’d think the people pardoned were all one-off cases of inspirational folks with master’s degrees and the like. In other words, we think public perception is generally that people get pardoned for one bad mistake they made many years ago after going on to lead wonderful lives, without any other criminal convictions. While that’s true in some cases, it’s certainly not true in many other cases.

We reviewed Evers’ pardons, and we found:

People Who Reoffended After Being Pardoned

Daniel Balderas was pardoned on July 9, 2021, for marijuana possession and failure to purchase a tax stamp. On June 7, 2022, he was found guilty of first offense OWI.

Evers pardoned habitual criminals. Some of the people he pardoned had very serious, lengthy criminal histories in addition to the crime for which they received the pardon. Some of those pardoned have domestic abuse histories.

Some people were pardoned for multiple offenses that spanned many years. For example, Marsha Vann was pardoned for a crime spree that occurred over 15 years – felony escape in 1990, armed robbery in 1995, and escape again in 2005. She also has convictions for prostitution and bail jumping. Evers wrote, “Marsha Vann was 25 when she failed to return to the Milwaukee County House of Correction after being released for childcare purposes. Several years later, she robbed someone with a weapon, and 15 years later, again failed to return to the House of Correction after being granted work release.”

Another woman who received a pardon committed her second felony while out on probation for the first; she was pardoned for three felonies that occurred at different times.

Evers has pardoned people for violent crimes, like aggravated battery. One woman was pardoned for the intentional abuse of a child. She had a battery case after that crime.

Evers has pardoned weapons offenders, including a person who was pardoned for four serious felonies in two counties, including a robbery and a short-barrelled shotgun offense. One woman was convicted of second-degree recklessly endangering safety with use of a dangerous weapon.

Another man pardoned, Taurus Kuykendall, had a firearm on school grounds.

Some were pardoned for battering police officers, resisting them and causing injury to them. One woman was pardoned for felony battery to a witness. Michelle Christman Dennis was pardoned for felony fleeing and two counts of felony battery to law enforcement officers. Christmas has other charges – disorderly conduct amended down from stalking and retail theft. Evers wrote, “Michelle Christman was 26, when she drove while intoxicated and led police on a high-speed chase. Later, she was also arrested for attempted retail theft. Since her conviction, Christman has remained sober, obtained two master’s degrees to accompany her existing Ph.D. in clinical psychology, and is now a faculty member at two universities in Chicago.”

Dale Varney was pardoned for burglary while armed with a dangerous weapon and for battery to law enforcement officers, offenses that occurred in different years. He has had other charges over the years including criminal damage to property, resisting and battery to emergency rescue worker and was listed as a habitual criminal.

One woman granted a pardon, Kathrine Barber, aimed a handgun at a police officer, according to news articles from the time. Officers then shot her, but she survived. The Madison incident occurred when the second-year law school student, who was a former prison guard and the founder of the Lesbian Alliance of Metro Milwaukee, led police on a high-speed chase. There had been a “prior incident involving weapons.”

Some were not young when they made their “mistake.” Some had more serious charges that were read-in at sentencing. Some cases weren’t that old. One was from 2013, for example.

To be sure, you can find positive stories in the pardons too. The governor’s pardon press releases describe how various people granted pardons obtained college degrees, held down good jobs and were community volunteers, in some cases. Some, but by no means all, of the pardons were for crimes committed decades ago by people who were then young. One man killed his best friend in a car crash and has terminal brain cancer. But we think the public thinks all of the cases are like that, and they are not.

Pardons are only granted for felony offenses or misdemeanors disposed of at the same time. The application needs to be five years since the applicant finished serving their sentence. Those seeking pardons can’t have pending criminal cases or be registered sex offenders. Pardons restore certain rights, such as the right to hold public office. A pardon advisory board reviews cases.