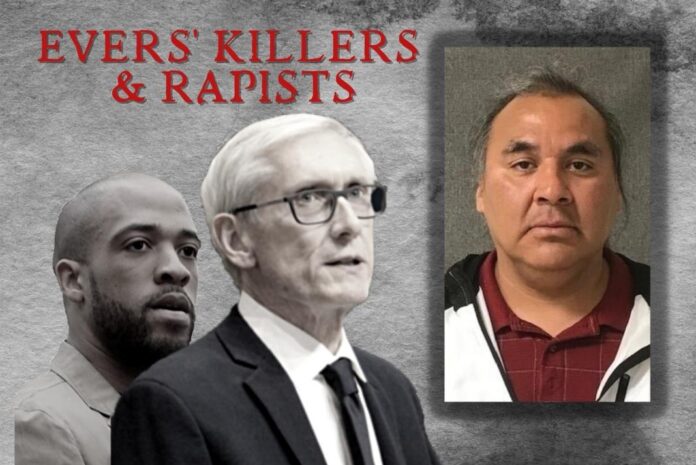 George Hindsley was one of them. His release was discretionary.

A 1998 article in the Stevens Point Journal says that Hindsley was convicted of murdering his 2-year-old son, George Thunder Hindsley at the Salvation Army Hope Center.

Hindsley put his son on the floor, covered him with blankets, knelt on the boy, and then held his hands over his son’s nose and mouth until the toddler died, according to that article.

Paroled child killer George Hindsley is back behind bars on a parole hold, but Gov. Tony Evers and his Department of Corrections will not tell the public why. We first wrote DOC, which is under Evers’ direct control and is run by his cabinet appointee, on OCTOBER 7, asking why Hindsley was in custody on a parole hold. We never heard back. We then wrote Evers’ press office with the same question, to no avail.

It’s part of a pattern of non-transparency when it comes to paroles.

We confirmed with the Shawano County Jail that Hindsley was in the jail as of October 23, 2022, and it’s for a probation/parole hold. The jail official did not have the details.

So we asked DOC and Evers himself. They did not bother to respond.

At least 16 paroled killers and attempted killers have either committed new crimes or violated terms of parole and ended up on Corrections holds.

More killers and attempted killers were freed on parole in 3.5 years under Evers than in 8 years under Scott Walker.

Date paroled:  3/26/2021 [You can look up George Hindlsey’s parole here. Put his name in the database and click “movement.”]

Sentence:  His mandatory release date was not until 2023

According to the Department of Corrections database, Hindsley was paroled on March 26, 2021, by Tony Evers’ two-time appointee, John Tate. He was convicted of homicide. Hindsley, 46, has a mandatory release date on the homicide of 09/13/2023. That means the parole was discretionary.

We reached a relative of Hindsley’s who blamed his problems on alcohol. The DOC website still lists Hindsley as living in Shawano, Wisconsin.

What did George Hindlsey do?

Hindsley said he killed his son because the mother was involved with a relative of his, and he didn’t want George to be adopted.

Hindsley was 21 years old at the time of the crime. The child died of asphyxiation after being “suffocated by a larger person,” newspaper articles from the time say. Hindsley, who stabbed himself in the arm after the death, told police he had said goodbye to his son the night before, according to the Stevens Point Journal.