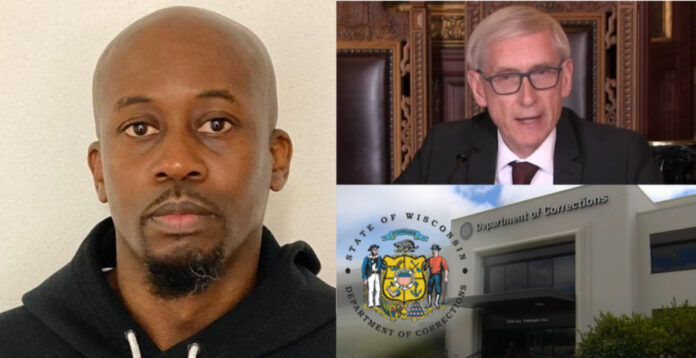 Parolees freed by Gov. Tony Evers’ appointee in 2022 are already endangering the community.

A West Bend man who was paroled this January by Gov. Tony Evers’ appointee after serving just 22 years of a 40-year sentence for a homicide conviction is back behind bars in Washington County after driving erratically on I-45 with a loaded illegal gun.

The parolee, identified by sources as Floyd Marlow, used a racial slur after the murder of a man on a Milwaukee porch.

He is not the only parolee released during Evers’ tenure to reoffend. On Friday, we revealed that a violent rapist, also paroled in 2022, had already reoffended, trying to choke and attack a woman in Appleton. We had to sue to get the 2022 names.

Last evening at 10:36 PM the Washington County Sheriff’s Office Emergency Communications Center received multiple 911 calls of an erratic driver on US 45 near Pleasant Valley Road. A deputy was able to stop the vehicle on West Washington St. and Wildwood Rd in the City of West Bend. Upon contacting the driver, a 45-year-old West Bend man, the deputy noticed signs of impairment. Before placing the driver through field sobriety testing, the deputy conducted a pat down search and located a loaded 9mm handgun in the driver’s waistband.
The driver failed field sobriety testing and then he was taken to jail after refusing further testing.
Charges are being sought for OWI, armed while intoxicated, carrying a concealed weapon and felon in possession of a firearm. 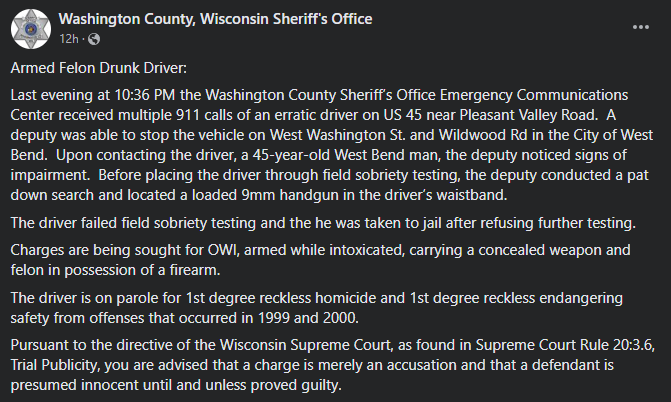 Sources tell WRN that the suspect is Floyd Marlow.

According to WI DOC records, Marlow was paroled on Jan. 11 of this year after serving 22 years of a 40-year sentence. His mandatory release date was in 2031. He was an old law inmate, and the parole was discretionary. Evers’ two-time appointee John tate made the parole decision.

According to court records, Floyd Marlow and his co-defendant, Dwight Campbell, were charged with killing Johnnie Humphrey on July 17, 1999. “At trial, Marlow stipulated that on August 2, 1999, he was in possession of the gun that discharged three of the casings found at the Humphrey murder scene. Several witnesses testified that they saw Marlow at the scene and heard Marlow say, “We killed that [N-].”

Court records also say that Renetta Barnette, a sixteen-year-old girl who lived upstairs from Marlow’s girlfriend along North 23rd Street, testified that, “shortly before the shooting, she saw a group of men, including Marlow and Campbell, run down the alley behind their house toward 24th Street. Barnette told the court that she then heard shooting and saw the men run up the alley toward the house. According to Barnette, Marlow and Campbell had guns in their hands. Barnette testified that when the men reached the house, she heard Marlow say, I think we killed that n*****.”

WRN has reported that, since 2019, Gov. Tony Evers’ Parole Commission has released hundreds of convicted criminals, freeing them early on parole mostly into Wisconsin communities, including more than 300 murderers and attempted murderers, and more than 47 child rapists.

Floyd Marlow has been charged in Washington County Court with possession of a firearm by a felon, carrying a concealed weapon, operating a firearm while intoxicated, and OWI.

The arrest comes at a time when Washington County has put forward a $3.6 million Anti-Crime Plan Referendum on the Nov. 8 general election ballot that would increase staffing in the sheriff’s office by 30 positions across several departments.