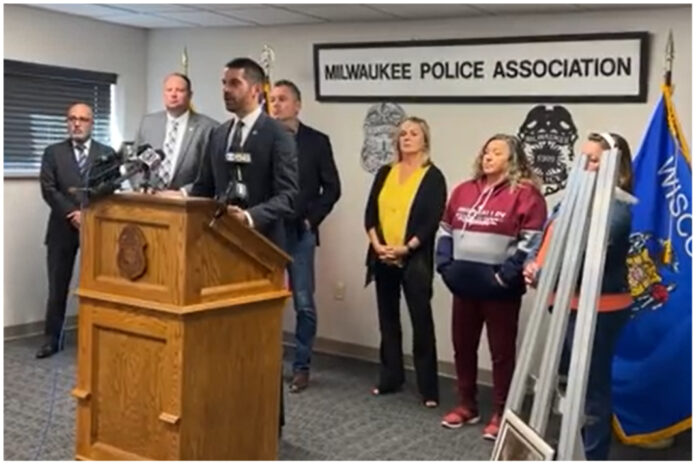 Tim Michels, Eric Toney, and a murder victim’s family joined together at the Milwaukee Police Association’s headquarters to call for changes to the state’s parole process, slamming Gov. Tony Evers for the discretionary paroles of heinous killers and rapists during his tenure, saying they have harmed victims’ families.

Both Toney and Michels said change is needed at the top to put victims first, and they pledged to do so.

Two sisters of murder victim Johanna Balsewicz, Karen Kannenberg and Kim Cornils, said at the Friday news conference that they hope Michels is elected this November because “things need to change” with how the state handles paroles, and they believe he would appoint a better Parole Commission chairman.

“Our fight isn’t over. Our fight is to change the system. I am hoping Michels gets elected,” Cornils said. At the end of the press conference, both Michels and Toney gave the emotional sisters, who eloquently described their family’s pain, a hug.

Michels, the Republican candidate for governor, slammed Evers for the release of murderers, including cop killers, and child rapists: “This will change…we will have rule of law once again in the State of Wisconsin,” he pledged.

Toney, the Republican candidate for state Attorney General, also slammed the fact that Evers’ appointee to the Parole Commission released “some of the most vicious murderers in the state of Wisconsin, including some who murdered police officers. These are discretionary releases, and they did not have to be released.”

Michels said that, on inauguration day, criminals would get a strong message with him as governor.

“Things are different now, and they’re not going to get away with it,” he said.

“I’m going to focus on victims,” Michels promised. “Tony Evers wants to coddle criminals. He wants to release early on parole half of the prison population…We need to have a governor in Wisconsin that will stand up for the victims like those standing behind me and make sure there aren’t future victims. The bad guys need to understand, if you’re not willing to do the time, don’t do the time.”

Toney said the heinous murders freed during Evers’ tenure “never should have been released. It’s unconscionable, shameful. We need to elect Tim Michels because this won’t happen under his watch as governor.”

Michels slammed Evers’ comments this week that he wants to give victims a voice at the table, saying the Democratic governor already failed to do that. “Tony Evers is saying one thing and doing another,” said Michels.

Wisconsin Right Now has interviewed multiple victims’ families who say they did not even know the killers of their loved ones were up for parole. It’s causing them significant trauma. Notifications of parole hearings are handled by an office within the state Department of Corrections, which is under Evers’ direct control.

“We are here to talk about the failure of Tony Evers, Mandela Barnes and the Parole Commission,” Toney said. “We shouldn’t be here today.”

Toney said two of the criteria for paroles are whether the parole is in the interest of justice and would depreciate the seriousness of the offense. He pointed to Wisconsin Right Now’s daily stories highlighting some of the heinous murderers and rapists released during Evers’ tenure.

“You can not look at these stories and say it was in the interest of justice” to release them, said Toney. “Why hasn’t the governor taken responsibility? Why hasn’t Attorney General Josh Kaul spoken up? Why haven’t we heard anything from Mandela Barnes?”

Toney noted that one of the freed killers “chopped a woman’s head off and put it in the stove.” He said it’s in the interest of justice for killers like that to stay behind bars.

“Why isn’t Tony Evers being asked questions” about the paroles “day after day,” Toney asked. “Either he’s asleep at the wheel or it fit with his plan to empty the prison population….Families are being re-victimized.”

Karen Kannenberg’s sister was murdered by her estranged husband Douglas Balsewicz. The family’s outrage last spring belatedly persuaded Evers to ask his Parole Commission chairman to rescind the release and resign, which he did. The family learned about the looming release “through the grapevine.” However, Evers has been silent on the other killers’ releases, and he reappointed John Tate as Parole Commission chair after many of them occurred.

Cornils said that, at first, Evers “didn’t even want to talk to us.” She said the family “called his office plenty of times and got no phone calls back.”

“I want Tim Michels to find a Parole Commission chairman who will have compassion,” Kannenberg said.

“If it’s not your loved one, you have no idea how this feels knowing someone now is going to be let out,” she said. “My sister is dead. My sister was only 23 years old. The system has to change. There are other families out here who did not even know their violent criminal was let out….we need something changed. There are just too many of us out here right now that are grieving.”