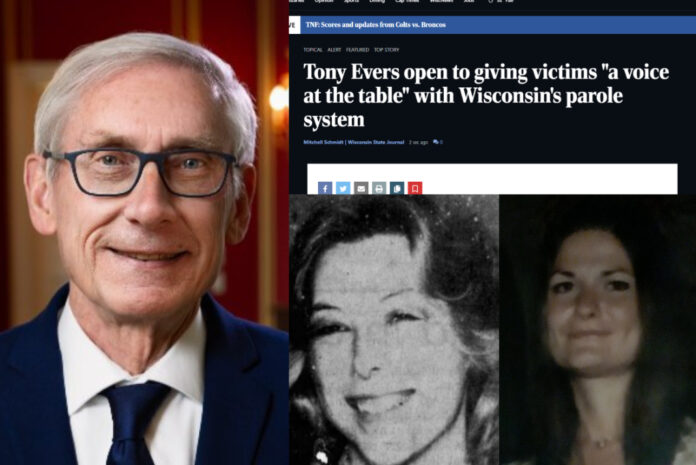 “This is an insult, and it’s disgusting,” Tim Erickson, on the parole of his mother’s killer. “I’ve been sick for three weeks.”

Families of murder victims whose killers were released in discretionary paroles are adamantly rejecting comments made by Gov. Tony Evers Thursday that the parole system, including the victim notification system, has worked. They want the process changed because they believe it has failed their families and others, both the parole decisions themselves and the system that notifies victims of hearings. 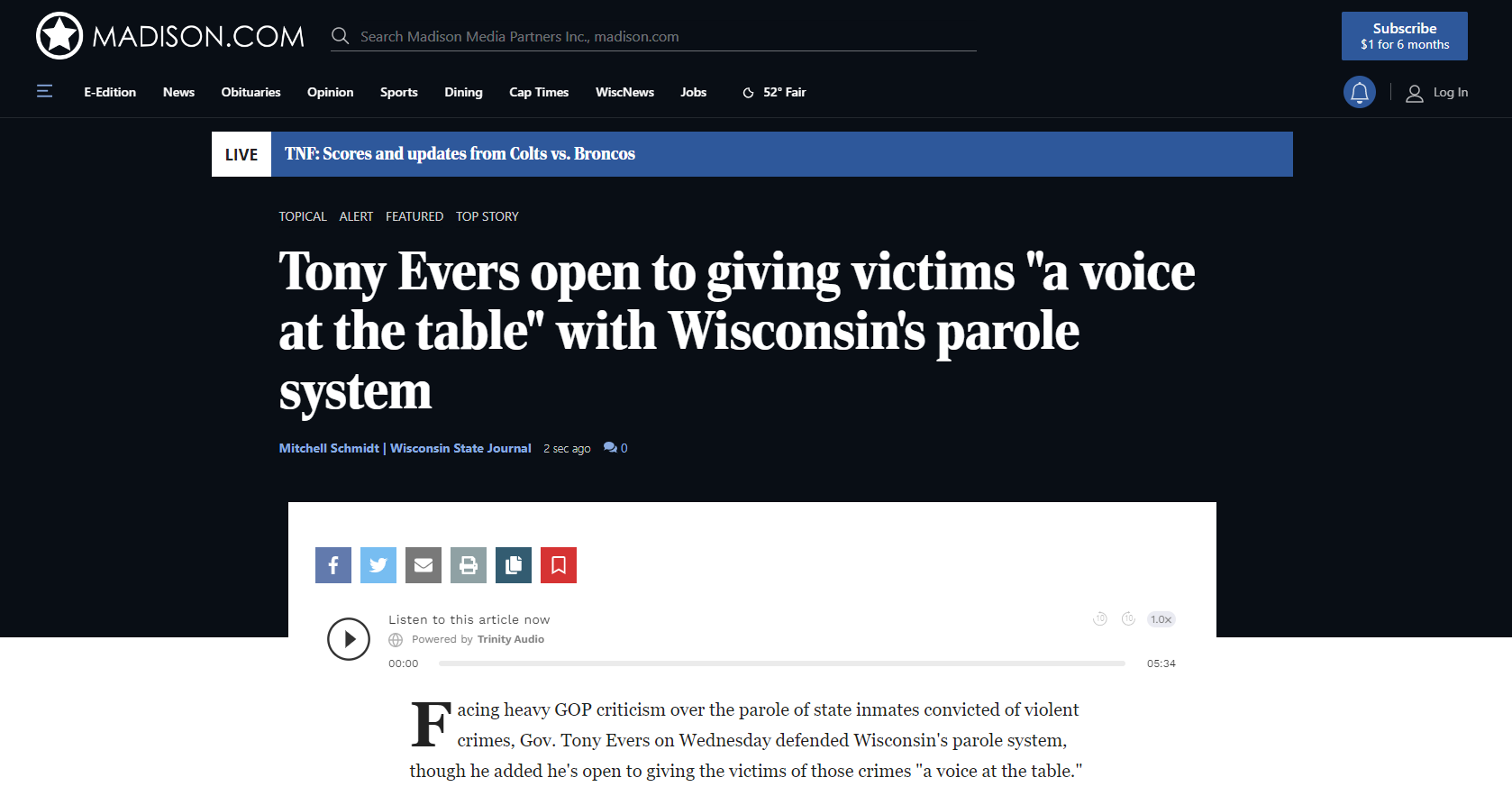 In his first extensive comments on the paroles and victim notification problems, Evers told the Wisconsin State Journal on October 6, 2022, “I think we’ve got the right system, we just need it to work appropriately.” He also said: “…at the end of the day I believe the system has and does work.”

He also said: “I believe if we make sure that victims are heard, that is probably the most important thing that we can do.”

Some victims’ families disagree that the system has worked. They say they were NOT heard when the paroles were granted, and now it’s too late. Evers’ appointee released some of the state’s most heinous first-degree murderers and rapists without multiple victims’ families learning about the parole hearings.

“The families of the victims know that this system is not working, and it does need to be revamped to accommodate the different families and the abilities of people to get on the Internet,” responded Cathi Henke, family member of victim Gladys Redlich, who was randomly murdered by a Wauwatosa sniper. Her killer, Scott Jenkins, was paroled in 2020, and he lives in Milwaukee on minimum supervision. Cathi and her husband, Mark, who is Redlich’s grandson, say the family did not know Jenkins was up for parole.

The State Journal article is headlined, “Tony Evers open to giving victims ‘a voice at the table’ with Wisconsin’s parole system.” The first paragraph says, “Facing heavy GOP criticism over the parole of state inmates convicted of violent crimes, Gov. Tony Evers on Wednesday defended Wisconsin’s parole system, though he added he’s open to giving the victims of those crimes ‘a voice at the table.'”

However, the problem is that multiple victims’ families were NOT given a voice at the table when Evers’ two-time appointee John Tate freed the killers of their loved ones between 2019 and 2021. The law already mandates that the government make a reasonable effort to ensure victims are notified; it’s not enough to be OPEN to them being part of the process. The state Constitution and Marsy’s Law give victims rights too.

Wisconsin Right Now has found family after family who say they didn’t know about parole hearings and/or paroles. As with other news articles on this topic, the State Journal did not include victims’ voices in its story, and Evers did not address those specific cases.

For example, Kathleen Beletsky says she got letters about parole hearings for years, but then they suddenly stopped. She called to find out why, and she was told her sister’s killer was already out. The murderer cut her sister’s head off and burned it in a stove. John Eilers told Wisconsin Right Now he did not know the man who murdered his father, police Sgt. Anthony Eilers, had been paroled. Ray Ziebell said he did not know that the man who murdered his pregnant teen sister was paroled. Patricia Logan said she found out the man who murdered her mother was paroled a year after he was out. Mark and Tim Erickson learned their mother Susan’s killer, Terrance Shaw, was paroled from Wisconsin Right Now.

Mark Henke told Wisconsin Right Now after reading Evers’ State Journal comments that the notification system is “absurd.” The Henkes say they would have objected to the parole if they had the chance; Elizabeth Lucas, who runs the victim services office for Evers’ Department of Corrections, called them to apologize this week. The Henkes are also very upset that Jenkins was released on parole at all.

Here’s the problem. The state notifies victims’ families through an online system that they can sign up for. However, victims’ families are told about this system when the crimes occur at the DA level. Years later, families fracture, people die, and juveniles grow up who were never told about it. Simply put, many victims’ families told us they simply did not know this system existed. Other families said they were signed up, at least at one point, but still didn’t know there was a parole hearing. It broke down in a myriad of ways, but the common denominator is that multiple families simply did not know about the parole hearings and paroles. Evers’ Corrections Department is in charge of victim notifications for parole hearings and runs the enrollment system; the Parole Commission is in charge of victim notifications when parole is granted.

The Henkes want the system changed so that the state proactively tries to locate victims’ families before parole hearings, perhaps getting a “signed document back from the family before you can proceed” with a parole. This document would have the families opt in or out to being part of a parole hearing and would ensure they know about it.

Tim Erickson, whose mother, Susan, was brutally murdered and raped in a random attack in her Onalaska home, agrees that the system needs changing, and he likes the idea of a more proactive approach. Through it all, Erickson has stressed that he voted for Evers in the past, and this is not a political issue to him. It’s a problem he wants fixed so other families aren’t similarly hurt in the future.

Read Evers’ comments in the State Journal, he said, “I’m only talking from my own personal experience. But I don’t feel like it’s (the current parole system) done me any service at all. I don’t care if it’s 40-some-odd years later, this is an insult, and it’s disgusting, and I’ve been sick for three weeks.”

Erickson and his brother did not know that their mother’s killer, Terrance Shaw, had a parole hearing and was paroled in 2021 back to the Onalaska community where he broke into Susan’s home and strangled and stabbed her. They found out from Wisconsin Right Now. When we called the Erickson sons and asked for comment on Shaw’s parole a couple of weeks ago, they expressed great shock that he was out.

Asked whether he was referring to the parole itself or the lack of notification, Tim said: “The parole first. I can’t believe that they even did it. The lack of concern or even thought. It just seems like everybody was like, ‘Nobody remembers this guy, let him out of prison,’ and then you find out so abruptly.”

He added: “I think what’s most frustrating about this whole last month now is, how did I not know for that long? It was like 13 months (that Shaw was out).”

Corrections recently moved Shaw to a hotel after confirming Wisconsin Right Now’s report that he was living in an unregistered daycare.

Erickson also believes that the state should proactively find victims’ families and get them to opt-in or out of parole hearings. “I think that has to be the case,” he said.

Mark Henke believes such a process should be instituted especially in first-degree murder cases. He noted that his grandmother’s killer has posted on Facebook about traveling throughout Wauwatosa and Milwaukee to various stores, which the Henkes find unsettling.

Erickson also pushed back at comments made by former Parole Commission Chairman John Tate, a two-time Evers’ appointee who freed Shaw and Jenkins and a string of other brutal killers and rapists. Tate told the Racine Journal-Times that parole cases are “entirely a data-driven process,” driven by metrics. He believes older inmates present less of a risk. Shaw is 73.

Erickson said he has called Tate twice but did not get a response.

“None of this is math,” he said. “These are families. These are victims also even if they weren’t the ones that were killed. You put them in some kind of bureaucratic ideal to where they’re just numbers, and they don’t really matter, and you cause pain. That’s what’s happening to my family right now. The idea that you can just punch it in a computer, and it spits it out in the other end, ‘he’s old, that’s cool,’ that’s so heartless and soulless, and it’s so antithetic to what exactly this all means.”

Tate resigned under pressure from Evers last spring after another family raised concerns about the looming parole of a convicted wife killer, Douglas Balsewicz. After that family traveled to the state Capitol and met with the governor, Evers asked Tate to rescind Balsewicz’s parole and Tate did. At issue: A victim in that case – the victim’s daughter – also did not know about the parole hearing. At that time, last spring, Evers wrote a letter strongly defending the rights of victims to play a role in the parole process. An administrative law judge has since recommended that the parole reversal for Balsewicz stand because of the victim notification problems.

Evers’ referenced that case in the State Journal article. “The folks who are the victims of the crime have to have a voice at the table and in this case that didn’t happen,” he added. “Maybe we can tighten that up a little bit, but at the end of the day I believe the system has and does work.”

However, it wasn’t only that one case. Evers did not address the others with similar victim notification issues.

The State Journal article also falsely stated: “Since Evers took office, the commission has granted about 460 discretionary paroles not required by law.” However, the other paroles were not “required by law.” The Parole Commission confirms that inmates who reached “mandatory release” under the law were never included in the sheet. Furthermore, killers serving life sentences don’t get mandatory release at all. This has been a point of confusion ginned up by Evers to distract attention from the discretionary releases of killers.

Some of the other paroles in the sheet fall under the state’s earned release and challenge incarceration programs, but those are not “required by law” either. A judge decides eligibility in most cases, but Evers’ Corrections Department makes the discretionary judgment call about whether an inmate is suitable for the programs. Evers and his administration also worked to expand those programs even though state data shows 40% re-offended in two years. No state law mandates that inmates be allowed into those programs. Those releases were labeled parole grants and parole commission action in the Parole Commission’s sheet, and the Parole Commission signs off on them.