Raul Ruiz was one of them. His release was discretionary.

Richard Woten, 17, was a completely innocent victim. He had gone to a Kenosha tavern to cash a check and to look for his friend, whose parents’ owned the Zimmerman’s Bar. Richard’s dad owned a custom car business in Kenosha.

“Why me? Why me?” Woten asked Ruiz, then 29 of Racine, and his other killer, as the men kicked and beat him to death, according to court testimony. The fatal wound was a stabbing to the heart, according to newspaper articles from the time.

Raul Ruiz and his associates had gotten into a fight in the bar earlier that night over game tables. This led to police being called, Ruiz punching a man, and him getting tossed out of the bar.

“[T]hem honkies messed over me, we going to let them get away with it? Let’s go over there,” Ruiz said, according to court records. He called another person a “f*cking honky,” punching him.

Shortly thereafter, Ruiz and his friend encountered Woten, who wasn’t involved in the earlier altercation, in an alley after he left the bar. They attacked and murdered him for literally no reason. The death was brutal.

“Bruises on his forehead showed he had been hit by a blunt object more than once. There were four stab wounds in his back and chest. Dirt ingrained in the knees of his trousers and the palms and knuckles of his hands indicated a struggle,” court records say.

“[W]e got one of the mother f*ckers,” Ruiz’s associate said, according to court records. Ruiz responded that “[W]e got the wrong one,” whereupon his accomplice responded, “[T]he mother f*ckers are all alike. We should have used a gun.”

Date paroled: 9/22/2020 [You can check his parole date here by putting his name in the Corrections database and clicking on “movement.”]

Sentence: Life sentence. People convicted of life sentences are not entitled to mandatory release. The parole was discretionary.

Other: Convicted of possession of child pornography in 1998. Acquitted of First-degree intentional homicide in 1976. 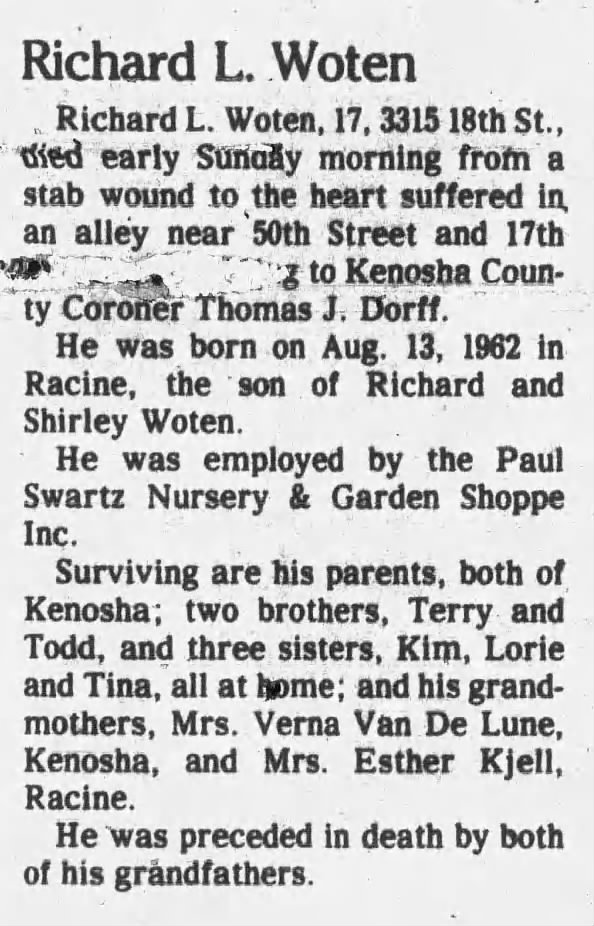 At approximately 10 p.m. on May 10, 1980, Raul Ruiz, Antonio Servantez and John Reyes arrived at the residence of Castula Ostrowski who lived across the street from Zimmerman’s bar. The three men had come to spend the evening with Ms. Ostrowski and Gloria Delgado, Ruiz’ girlfriend, who lived in the same house.

Court records give the details:

Shortly after arriving, Ruiz crossed the street to Zimmerman’s bar to play pool. He became involved in an argument with the other patrons over the use of the game tables and Joseph Zimmerman, the tavern owner’s son, asked him to leave. When Ruiz refused, the police were summoned, and Ruiz was escorted out.

Ruiz returned to Ostrowski’s house and, according to Ostrowski, told Servantez: “[T]hem honkies messed over me, we going to let them get away with it? Let’s go over there.”

Other tavern patrons rushed out the door into the street and Ruiz, Servantez and Reyes ran away. The police were again called. They investigated the situation and talked to Ruiz outside the Ostrowski home. He stated that he had not been back to the bar. The officers left around midnight after advising Zimmerman to close the tavern early to prevent further trouble.

As the bartender was closing, Woten, who had been to the tavern earlier that evening to cash a check, entered looking for his friend Joseph Zimmerman. The bartender informed him Zimmerman had left.

At about 12:15 a.m., Helen Bartholomew, a neighbor who occupied a second-story apartment overlooking the parking lot adjacent to Zimmerman’s, saw two figures run through the parking lot. A few minutes later she heard shuffling feet, shouts and a thud that sounded as if something had hit the garage located adjacent to the alley below her house.

She walked out of the house onto a porch and saw two men in the alley below. One of the two, the taller more slender man, was standing while the shorter more stocky individual was bending over an object on the ground.

When Bartholomew called her son’s name, the taller man said: “[L]ets get out of here; they’re after us already.” He then moved quickly away.

Bartholomew called out again. The shorter man, who was still bent over the object on the ground, looked up and said that it was Frank, his friend, who was sick.

They discovered Woten’s body in the alley. The victim’s watch and approximately $25 in cash were still on his person. Bruises on his forehead showed he had been hit by a blunt object more than once. There were four stab wounds in his back and chest. Dirt ingrained in the knees of his trousers and the palms and knuckles of his hands indicated a struggle.

The conviction was overturned by an appellate court when the DA was accused of withholding evidence, but it was reinstated in a ruling by the Wisconsin Supreme Court, old newspaper articles from the time say. 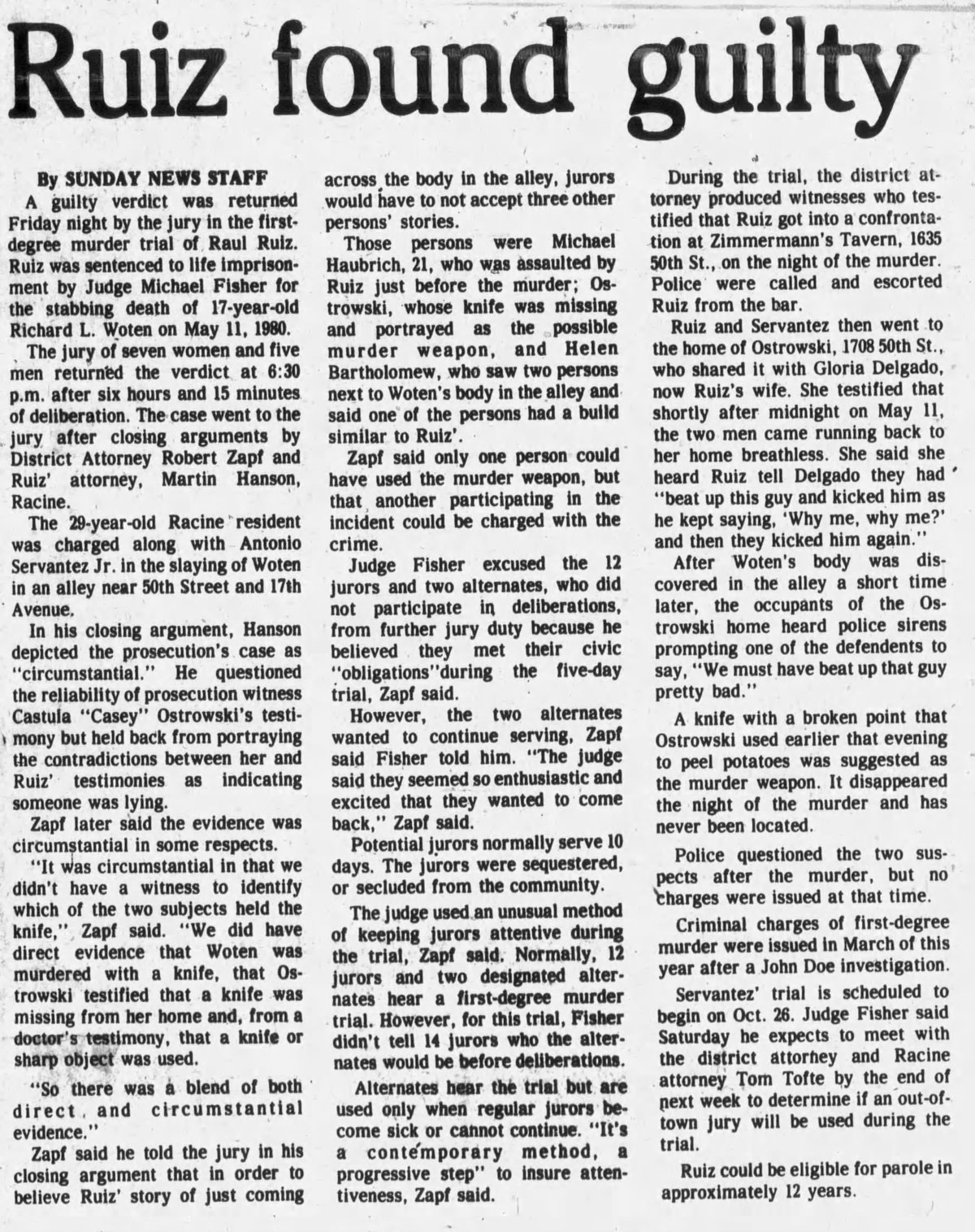