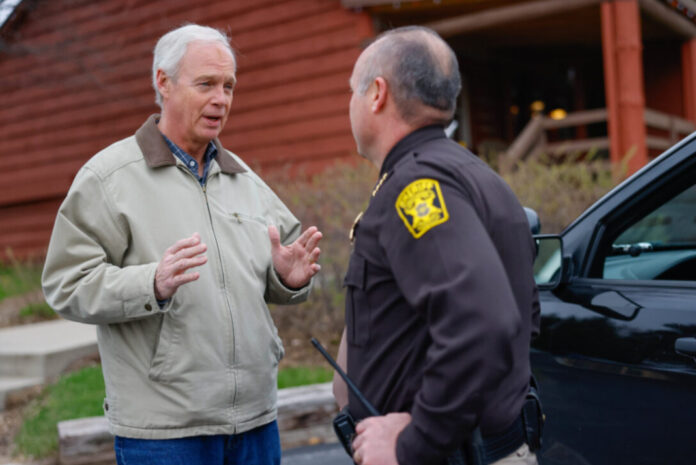 The announcement comes after Johnson’s opponent, Lt. Gov. Mandela Barnes was forced to remove the only two active duty law enforcement officers from his original list.

Two Wisconsin sheriffs are endorsing Mandela Barnes. Sheriff Troy Knudson of Rock County and Sheriff Jeff Skatrud Green County both were added this week on the Barnes’ campaign website. WRN has reached out to these two sheriffs for comment regarding their endorsements.

OSHKOSH – Independent, Democratic, and Republican county sheriffs from all across Wisconsin are endorsing U.S. Senator Ron Johnson in his re-election campaign. Johnson is running against anti-law enforcement candidate Mandela Barnes who is running on ending cash bail, cutting the prison population by half, abolishing ICE, and defunding the police. And was caught lying about law enforcement endorsements again yesterday.

“I proudly endorse Senator Ron Johnson. He is a genuine friend to law enforcement and backs the badge,” said Walworth County Sheriff Kurt Picknell. “Senator Johnson has a proven track record of sponsoring and supporting legislation that clearly prioritizes law enforcement officers and the communities they serve. I trust him to always have the back of the hardworking men and women of law enforcement to keep our communities safe.”

“Senator Johnson supports Law and Order and stands with Law Enforcement and Public Safety. He brings a common sense approach to all the craziness in DC and represents Wisconsin the way it should be,” said Florence County Sheriff Dan Miller. “I am glad to support Sen. Ron Johnson.”

“Senator Ron Johnson has seen the violent acts that occur frequently against our law enforcement professionals across this Nation with many of those actions resulting in line of duty deaths. Senator Johnson seeks to ensure the safety of our local and State law enforcement officers through his efforts to further the Thin Blue Line Act,” said Marathon County Sheriff Scott Parks. “At the same time, Senator Johnson continues to make a difference in the lives of those persons who can be frequent law enforcement contacts by his continued efforts and support of The Joseph Project, which connects people with opportunities for self-improvement and employment. I support Senator Johnson and would encourage your support too.”

“Senator Ron Johnson cares about the safety of the citizens in Wisconsin. His continued support of law enforcement and those that risk their lives every day to keep all of us safe is appreciated,” said La Crosse Country Sheriff Jeff Wolf. “We need Senator Johnson to continue his efforts for all of us and I am proud to endorse him in the upcoming election.”

“Senator Ron Johnson is concerned about public safety therefore, he is a strong supporter of law enforcement and our efforts to keep citizens safe,” said Clark County Sheriff Scott Haines.