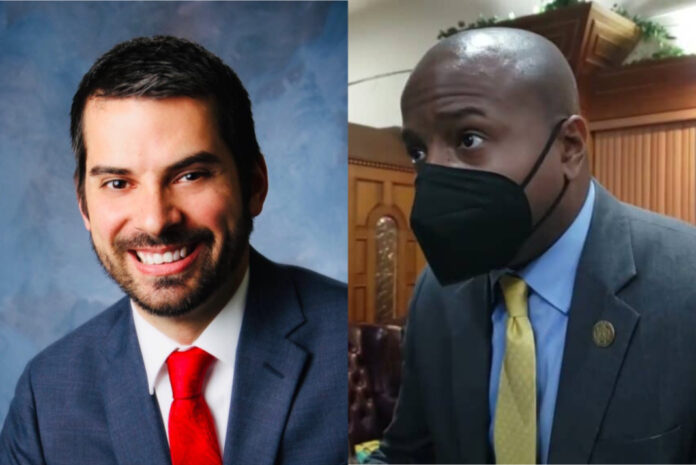 Milwaukee Mayor Cavalier Johnson wants to reduce the number of sworn officers on the Milwaukee police force to 1,640. For comparison purposes, consider that the MPD had 2,130 sworn police officers in 1995.

Republican Attorney General candidate Eric Toney called on Milwaukee Mayor Cavalier Johnson to reconsider his 2023 budget proposal that “equates to the loss of about 17 officers” as an already severely depleted Milwaukee Police Department grapples with historic homicide numbers. This prompted a heated exchange with Johnson on Twitter.

“At a time when Milwaukee Police are already short nearly 250 officers, Milwaukee Mayor Cavalier Johnson proposed cutting the budget for police officers by 1% – which equates to the loss of about 17 officers,” Toney, the Fond du Lac County DA, wrote.

Johnson responded by sniping, “Milwaukee’s not your punching bag” and trying to mislead people by saying his budget increases funding to MPD.

However, The Milwaukee Journal Sentinel just wrote a story that backs up Toney’s position, not Johnson’s. “The 2023 proposed budget, released Monday, calls for a 1% reduction in sworn police officers, the elimination of two fire engines, and substantial cuts in the hours and programming at five of the city’s 12 neighborhood libraries,” the newspaper wrote.

The newspaper continued, “In the proposed budget, the average sworn strength in the police department would drop from 1,657 officers to 1,640.” For comparison purposes, consider that the MPD had 2,130 sworn police officers in 1995.

To try to hide this fact and mislead people, Johnson shared a chart showing the overall police budget, not the piece relating to sworn officer positions.

Mr. Mayor, during historic violence your budget DEFUNDS the # of cops by 17, provides insufficient recruit classes to fill 200+ vacant positions and vacancies that will occur from retirement.

For the safety of Milwaukee and Wisconsin, I implore you to reconsider your budget. https://t.co/ejwgVvXUqB

We previously reported that the number of sworn officers on the Milwaukee police force is at a historic low for the past 25 years, down at least 18% since 1995. We repeatedly hear from Milwaukee police officers who say there are shockingly few squads per district and that they are tied up in endless med runs or understaffed to the point that it’s endangering officers’ lives.

“DA Toney, my proposed budget actually INCREASES funding to MPD,” Johnson replied on Twitter. “If you’re not compelling folks in your party (which controls the Legislature!) to provide funding to adequately support public safety, then you’re not serious about public safety. Milwaukee’s not your punching bag.”

What Johnson is dodging is the fact that the budget decreases the number of officer positions/recruit classes by 1%, Toney said.

Toney responded, “Mr. Mayor, during historic violence your budget DEFUNDS the # of cops by 17, provides insufficient recruit classes to fill 200+ vacant positions and vacancies that will occur from retirement. For the safety of Milwaukee and Wisconsin, I implore you to reconsider your budget.”

Less than two years ago, Johnson was one of the leading advocates at City Hall pushing for defunding the Milwaukee Police Department so severely it would eliminate the equivalent of two police districts and the sensitive crimes unit.

In February, Johnson told WRN that he wouldn’t “commit” to increasing the number of officers on the shrinking Milwaukee police force because the city needs to take care of other “challenges” instead, such as plowing snow, funding libraries, and picking up garbage.

He once referred to the police as an oppressive institution that caused “death” to people of color. He once advocated sending a controversial BLM leader to respond to violent crimes instead of police. That man is on federal pretrial release on accusations he was involved in a failed plot to firebomb a Milwaukee police district station, involving children.