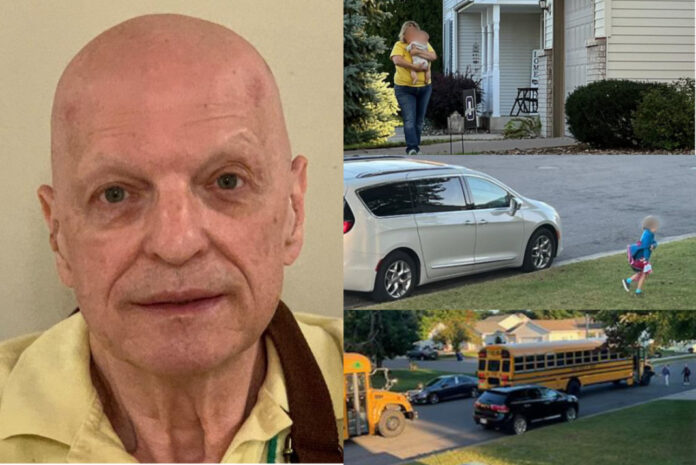 The parole agent told her that Shaw has privacy rights. She told the parole officer that neighbors believe Shaw is living in an Unregistered daycare. She said the agent responded that they are aware of all of that and reiterated that Shaw was approved to live in that house.

The next-door neighbor of paroled strangler and rapist Terrance Shaw is furious that he was released into the Onalaska community where he once preyed on and murdered a young nurse, and she says that Corrections placed him in a house that she believes may operate as an unregistered daycare due to the number of kids brought to the home and picked up each day at regular intervals. He also lives with a juvenile relative, she said.

Tonja Colsch, 51, a title closer, told Wisconsin Right Now in an exclusive interview, that she learned Shaw, a registered sex offender convicted in 1982 of the random murder of Susan Erickson, was living next door to her a few days ago through the grapevine. She says that he lives with his adult son, his son’s wife, and their teenage daughter, information verified through public records, the sex offender registry, and social media.

Colsch said she called Shaw’s parole officer and he refused to tell her the conditions of Shaw’s release without an open records request. The parole agent told her that Shaw has privacy rights. Colsch told the parole officer that neighbors believe Shaw is living in an Unregistered daycare. She said the agent responded that they are aware of all of that and reiterated that Shaw was approved to live in that house.

Furthermore, she is concerned by the volume of kids going to and from the house.

“I believe it’s a private daycare,” Colsch said of the house. “This morning, I watched one gal drop off her two little ones and then there was a van, I didn’t see how many little ones she had, but they have to be under 5.”

We could not find a daycare license for the residence, but Colsch says that multiple young children – about five – are dropped off at the home in the mornings and then picked back up and this has happened for months. The neighborhood has many other children and is a stop for school buses, she noted.

A woman dropped off an infant at the door of Shaw’s residence on the morning of September 21, 2022.

She’s furious and scared. “There’s quite a few kids, my kids are grown, but I have grandkids,” she said.

Colsch is old enough to remember how terrified the community was when Erickson was murdered. Shaw, who did not know his victim, had glimpsed her through a picture window, broke in, raped, stabbed, and strangled her to death. The murder was so brutal that Shaw left behind a severed piece of his thumb and fingernail at the murder scene. He was arrested a year later prowling the home of another med tech in Onalaska, with meat hooks and rubber shoes in his car. The arresting officer believes he was using the meat hooks to hike himself up the side of the med tech’s home to peer in, and he told WRN that the front door of the woman’s house was chipped.

We contacted a woman who lives in the home via cell phone and left a message seeking comment. We did not get a response.

A young child was dropped off at Shaw’s residence on the morning of September 21, 2022

Erickson’s two sons and the Onalaska police chief also did not know Shaw was back in Onalaska living 2.6 miles from the murder scene, even though he was released in 2021.

Colsch was 10 years old when Erickson was murdered. “When this happened, it was huge,” she said. “My mom is a nurse. I remember this clear as day. I remember those nurses were getting walked out with security. There was a lot of fear at the time. I don’t think there had ever been a big murder like that.”

So she was especially horrified to learn Shaw had moved in next door. She called his parole officer to learn more about his conditions.

We asked the Department of Corrections why Shaw was allowed to live in that location and what his parole conditions are but have not received a response. We have asked Evers and Lt. Gov. Barnes and AG Josh Kaul about Shaw with no response.

What terrifies her about the Erickson murder is that it was so random and “out of the blue” and then they “found him stalking another med tech from the hospital.”

“None of us knew about this,” Colsch said of the release until a text went around after we broke the story of Shaw’s parole and the La Crosse Tribune then followed with its own story.

Although officials told the Tribune that Shaw, 73, has severe mobility issues, Colsch doesn’t think he’s as “frail” as they are purporting.

She said he does use a stand-up walker at times, but he’s “not in a wheelchair,” and she’s seen him walk unassisted. He even spoke to her.

“It’s just a strange situation.” She said Shaw and his relatives moved into the home in October 2021. “They have teenage girls.” One is now over 18, but the second is a juvenile teen who lives in the home with Shaw, according to Colsch.

“I honestly never thought he would be released,” she said. “His excuses for why he did this to me do not make sense.”

Shaw argued that he was suffering from undiagnosed PTSD from his military service in the Vietnam War. There was a petition to free him that said he got a “doctorate in Bible studies and a PHD in philosophy of religion.”

Colsch said, “A lot of veterans went through Iraq, and, yeah, they have PTSD, but they never hurt a fly. They would hurt themselves before they hurt a fly.”

Colsch said she “did not vote for Gov. Evers, nor will I be voting for him again because this is unacceptable.” She believes Shaw “wouldn’t be out of it weren’t for him (Evers)” because the governor selected the parole commission chair who freed Shaw.

As for Evers’ pledge to reduce the prison population by 50%, she said people with lower level offenses should be considered, but not someone like Shaw. He “brutally raped and murdered an innocent woman. It was not a crime of passion. They had nothing to do with each other. He was just walking by one day,” Colsch said.

She says the fact Shaw is living back in Onalaska “went like wildfire” after the news stories.

Colsch believes a system needs to be created to notify the public where convicted murderers live, much like the sex offender registry. Shaw’s address is available on that registry, but the killers without sex offenses are not. We asked Corrections for the address of another convicted killer, for example, and were only given the city.

“As a single woman living by myself, I would want to know that I had somebody convicted of first-degree murder living next door to me so I can have the choice to have the opportunity to protect myself,” Colsch said.

She doesn’t think Shaw’s age matters much. He’s 73. “If he was 90 and dying from cancer, I might feel a little bit different, but I’ve seen him, and I don’t think he’s as disabled as what they’re trying to portray him as. My mom is around that age, and she takes care of two great-grandchildren, and she’s all over the place.”

She called Lt. Gov. Mandela Barnes comment on video in 2018 that releasing prisoners was “sexy” disgusting. “I don’t know how it’s sexy to release someone who committed a murder like this,” she said.

Another concern she articulated is that neighborhood property values will drop, and no one would want to buy her house now even if she did try to move. “He’s living next door. I’ve even spoken to him.”

Before she knew who he was, “I figured he was a sweet old guy,” she said of the killer. “He is not frail though to the point where he couldn’t do something.”

She added: “I can not imagine what Susan Erickson’s family is going through right now. They didn’t even have common courtesy to tell those family members and then to put him back in the same community two miles from where this murder happened is absolutely unacceptable.”