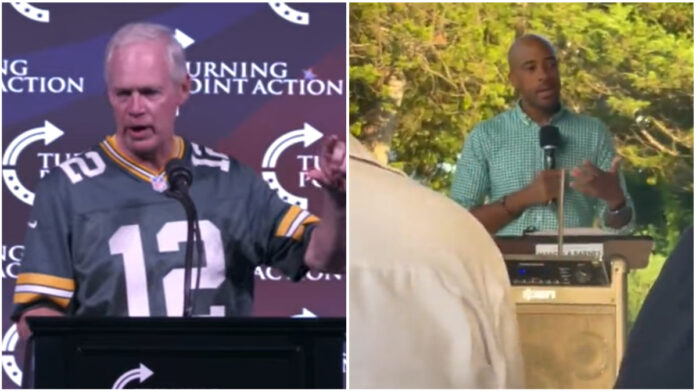 Johnson, speaking at a rally in Green Bay on Sunday Sept. 18, 2022, cited the numbers first reported by Wisconsin Right Now that 44 child rapists and more than 270 murderers and attempted murderers have been freed early on parole from 2019-2021. Evers lied to voters in 2018 that he would not release violent criminals from prison. The Parole Commission has not released 2022 names despite a long-languishing open records request.

The violent criminals released include some of the state’s most heinous killers and rapists.

“These are the people that Gov. Evers and Lt. Gov. Barnes have let loose into society,” Johnson said. “How does that reduce crime? It doesn’t. These people are dangerous. We can’t allow them to win.”

You can read about some of the killers’ cases here.

They include a man who decapitated his wife and burned her head in a wood-burning stove; cop killers; a man who broke into a nurse’s home and stabbed, strangled and raped her after glimpsing her through a picture window; and a man who threw a pregnant teenager off a bridge. The brother of that teen also has blasted both Evers and Barnes. He was not even aware of the parole.

Multiple victims’ families told Wisconsin Right Now they were not aware of the paroles.

“Get out there and make sure they don’t win,” Johnson said of Barnes and Evers.

Barnes, a Democrat, is facing Johnson in November in the U.S. Senate race. Businessman Tim Michels is facing Evers.

Evers’ 2019 appointee as Parole Commission chair, John Tate, had authority over the releases. Evers reappointed him in 2021 after many of the killers and rapists were released. Last spring, Evers, belatedly and facing great pressure from another victim’s family, turned on Tate and asked him to resign and rescind that parole of a wife killer, which Tate then did. However, Evers has remained silent on the earlier cases, including lack of victim notification in some of them.

Asked by the La Crosse Tribune about the release of murderer Terrance Shaw to Onalaska (which the victim’s sons and local police chief were not informed about), Evers’ office said only, “The governor disagreed with decisions made by the former Parole Commission chair, and that’s why he asked for the former chair’s resignation.” He did not specify which decisions of his own appointee he disagreed with, explain why he didn’t speak out before or why he reappointed him after many of the killers’ releases, nor did he address the victim notification issues.

Both Evers and Barnes advocated reducing the state’s prison population by 50%, with Barnes calling doing so “sexy” in a 2018 video. The next year, the Evers/Barnes Parole Commission chair started releasing the killers and rapists. Barnes has not responded to questions seeking comment.