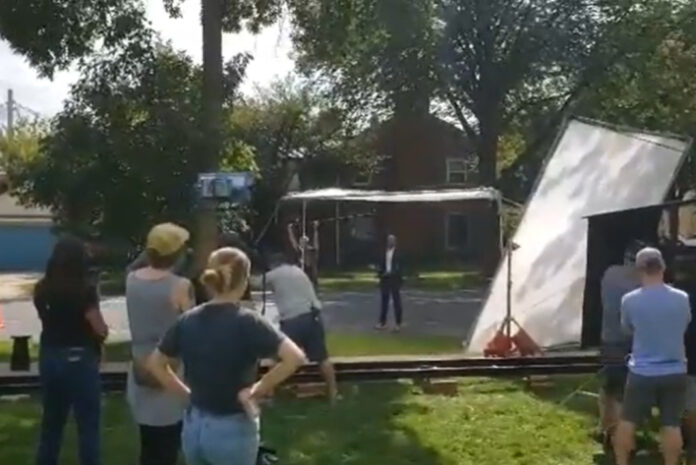 One of our readers managed to get video of a Mandela Barnes campaign ad video shoot in which Barnes claims that he will “keep dangerous criminals off the streets,” even the Evers/Barnes administration’s Parole Commission has released some of the most violent killers and rapists in state history into Wisconsin communities during the past four years.

The media are refusing to report on the paroles, even though multiple victim families were not told about them, so Barnes is clearly hoping to mislead the public on his public safety record as he loses ground in polls. State law requires a reasonable attempt to reach victims; families; Barnes and Tony Evers have not responded to requests for comment on the paroles.

The reader captured a video of the Mandela Barnes ad shoot, which he stumbled upon at Enderis Park in Milwaukee in mid-September 2022. He provided it to Wisconsin Right Now. Barnes was flanked by a couple of people in police uniforms but the reader says he was told by people at the ad shoot that the squad car being used was supplied by a person from Chicago.

Our reader told us, “I was the only person that stopped by two watch and was questions by three of the workers on why I was there and who I worked for. I had a young lady followed me around trying to block my view from taking pictures. There were a couple people who were definitely just security walking around behind me.”

In the Mandela Barnes ad shoot video, Barnes claims, “Ron Johnson’s lies about me are ridiculous.. I won’t defund the police, and I’ll keep dangerous criminals off the streets. People shouldn’t be scared to step out of their front door, worried about their kids.”

In 2018, Barnes said on video that it was “sexy” to reduce the prison population, and he’s advocated cutting it in half. He supports eliminating cash bail. Barnes’ campaign has been funded by anti-law enforcement groups in part. He rushed to judgment against the later exonerated police officer who shot Jacob Blake in Kenosha, arguably inciting the riots there. He “railed” against mass incarceration, supporting early release, according to the Washington Free Beacon.

A year later after the “sexy” comment, the Evers/Barnes administration’s appointee to the Parole Commission started doing just that. The Evers/Barnes administration’s Parole Commission ultimately released almost 1,000 criminals to Wisconsin streets, including 270 people convicted of homicide-related offenses and dozens convicted of rape, including 44 convicted of child rape. The governor reappointed the Commission chairman, who has sole authority on the releases, in 2021, after many of the killers and rapists were freed, saying he was pleased to do so. Barnes is his #2.

Wisconsin Right Now is running a story every morning at 7 a.m. featuring another released killer. They include a man who decapitated his wife and burned the head in a wood stove in Oconomowoc; a man who broke into the home of a La Crosse nurse and randomly strangled, stabbed and raped her; and a biker from Green Bay who helped gang rape a woman and then cut her throat and left her to die in a manure pit. And many more.

In the ad shoot, Barnes also ridiculous implied that more training is needed to keep the public safe – from cops.

“I’ll make sure our law enforcement officers wake up every day to protect us, to have the resources and training they need to keep everyone safe.”

He also said, “I’ve spent my career serving folks here, and I’ll do everything I can to protect the community.”

But that’s not his administration’s track record.

It’s also not his legislative record.

For example, as a legislator, Barnes voted against making it a felony to threaten a law enforcement officer and to assault or threaten a cop’s family member or prosecutor.

He also, according to the Washington Free Beacon, pushed a bill to require that Wisconsin judges “release a defendant before trial” rather than setting cash bail, unless the judge determined there was clear evidence that the person would “cause serious bodily harm to a member of the community.” However, the site noted, prosecutors could not use “the nature, number, and gravity” of charges to try to prevent the release.

6 years ago when we kicked off the 11×15 campaign to cut the prison population in half, we could hardly find elected leaders or candidates to get onboard.

As a state legislator in 2016, Mandela Barnes introduced legislation to eliminate “monetary bail as a condition of release for a defendant charged with” a crime.