Robert Taliaferro was one of them.

Elise Taliaferro thought her husband Robert Taliaferro was going to “make love” to her, she told police as she died. Instead, he brutally stabbed Elise through the upper chambers of her heart. He showed no remorse, according to court testimony. The crime occurred in Madison, Dane County.

“In that darkened room he got this knife…he opened the knife… and at that time attacked his unsuspecting victim, Elise,” the prosecutor said.

Taliaferro brutally stabbed Elise four times. He fractured Elise’s rib. The knife passed through her lung and into the upper chambers of her heart, killing her. She had multiple abrasions, bruises, and scratches on her body, an old newspaper article stated.

Date paroled: 01/11/2022 [You can check his parole date yourself in the DOC database by putting his name in here and choosing “movement”]

The Victim: Elise A. Taliaferro, 36

–Worked at the Insurance Commissioner’s Office.

According to an April 27, 1984 Capital Times newspaper article accessed via Newspapers.com, Taliaferro murdered his 36-year-old wife at the Spence Motel. The prosecutor argued that he intentionally killed her. He claimed he stabbed her during a sexual bondage act, but a pathologist testified that there was no evidence that was true.

When police found her, Elise was dying, but she told police, “We were making love” when he stabbed her, according to a 1984 Capital Times newspaper article.

“In that darkened room he got this knife…he opened the knife… and at that time attacked his unsuspecting victim, Elise,” the prosecutor Robert DeChambeau told the jury, according to the Capital Times. “Elise was preparing to make love and Robert Taliaferro was preparing to kill her.” The prosecution argued that Elise was a battered wife and Robert had previously threatened to kill her.

Robert told the inmate, who got a deal for the testimony, that they were fighting so he slapped and then killed her. The inmate said Taliaferro did not show any remorse and said he was glad she was dead, saying, “He didn’t regret it.” 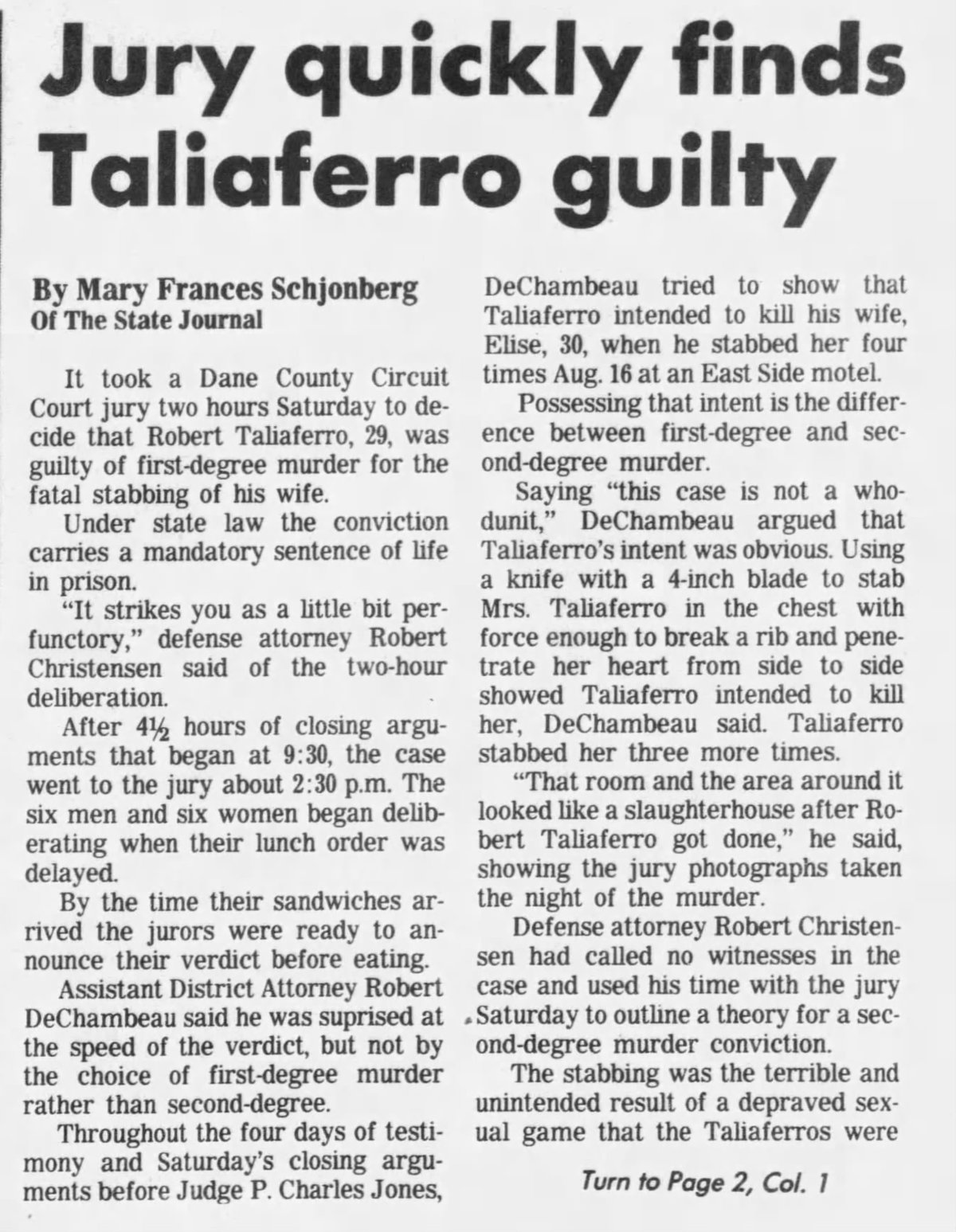