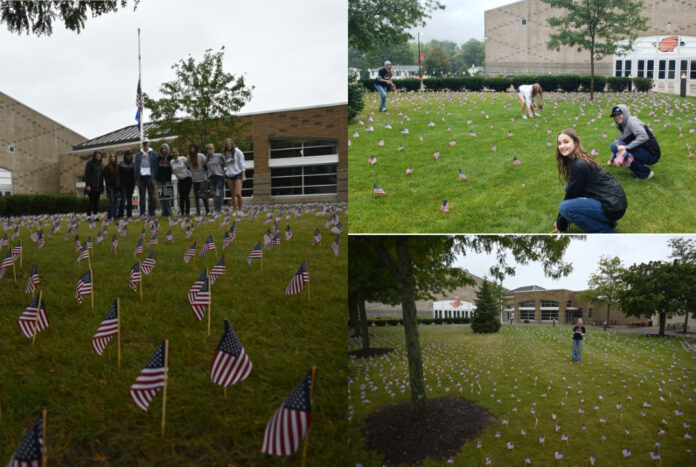 Rain didn’t stop a group of patriotic Hartland, Wisconsin, teens from commemorating the 21st anniversary of the Sept. 11, 2001, terrorist attacks. Students with the Hartford chapter of Young America’s Foundation planted almost 3,000 tiny American flags in the grass outside Hartford Union High School on the anniversary.

“The 9/11: Never Forget Project is so important because it put into perspective for my generation, who never had to experience 9/11, just how vast the death and destruction really was,” said Jenna Piwowarczyk, who founded the Hartford YAF chapter.

“Remembering and honoring those crowded in stairwells, jumping to their death, and those rushing in to save lives should not be a political issue; but it is,” she said.

“Anti-American rhetoric is slowly seeping into American culture and coercing us into forgetting about 9/11, but I’m thankful for Young Americas Foundation, Hartford Union high School,  and the YAF club members for getting together to remember those murdered.”

Former Wisconsin Gov. Scott Walker is the president of YAF.

We will never forget. pic.twitter.com/PQQ6rIDjS1

According to the national YAF organization, which provided the flags to Hartford’s chapter:

“YAF activists at high schools and colleges across the country are keeping alive the memory of those lost to radical Islamist terrorists in the world-changing events of September 11, 2001.  The iconic displays made up of 2,977 American flags—one for each innocent life taken—bring schools, communities, and individuals together to pay tribute and continue our promise to ‘never forget.’

Started by Young America’s Foundation in 2003, the 9/11: Never Forget Project has grown into the largest nationwide student activism project and become a patriotic tradition for students from coast to coast. In total, more than 12 million American flags have been placed on campus quads and along high school sidewalks as part of this important project.”