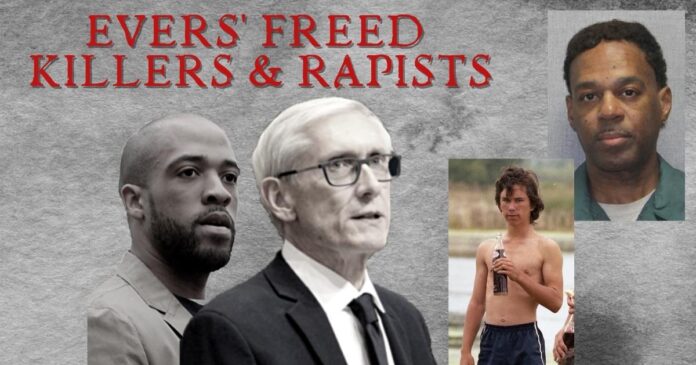 Since 2019, Gov. Tony Evers’ Parole Commission has released at least 884 convicted criminals, freeing them early on parole mostly into Wisconsin communities, including more than 270 murderers and attempted murderers, and more than 44 child rapists. Danny Hall was one of them.

Fourth in the series.

Danny Hall left a trail of terror throughout Milwaukee County, when, in a single week, he shot three gas station clerks in the head for small amounts of money. There was no rhyme nor reason for it. He would enter a gas station, bring items for the clerk to ring up, announce a robbery and then shoot the clerks in the head even if they complied.

Gene Opalowski, 17, was an attendant at the Clark station at 5909 West Good Hope Road in Milwaukee. Hall shot the teen in the eye, killing him. It was Opalewski’s first night alone on the job, according to the Appleton Post-Crescent. A police officer found him lying on the floor. Hall had purchased almost $5 of gas.

The second clerk was shot at the Citgo Quik Mart at 1602 East Capitol Drive in the village of Shorewood. When he realized Hall was going to rob him, he said, “Take what I got,” but “the defendant put the cups down on the counter, reached over the cash register with his left hand, took the money and raised his right hand holding the gun and shot (the clerk) in the face just below the right eye,” court records say.

The third clerk was shot at the White Hen Pantry at 6829 North Teutonia Avenue, Milwaukee. Hall asked him for cigarettes and then he heard a bang and felt something strike the left side of his head.

“Opalewski’s death resulted from a gunshot wound to his head from a .25-caliber bullet later removed from his body during the autopsy. He was shot in the face in the right-upper eyelid.”

Hall admitted shooting “Opalewski from a kneeling position” after Opalewski saw his gun and fought him for it.

Date paroled: 10/15/19 [You can run his parole date for yourself by putting his name in this DOC database and clicking on “movement”] 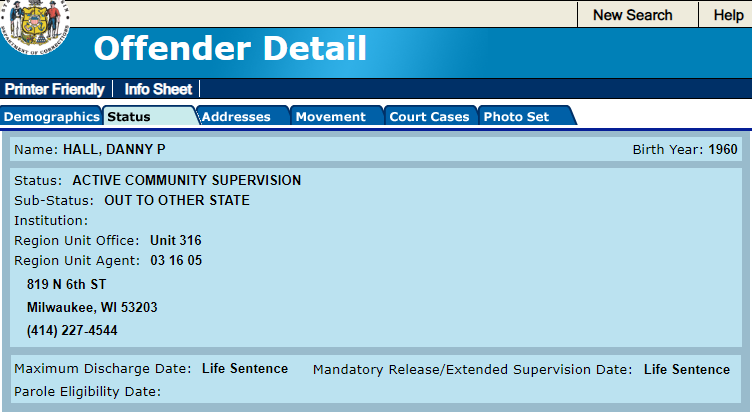 According to court records, 11 of the crimes occurred between August 25th and September 2, 1978.

Hall, then 18, shot the three gas station clerks over a several-day period. According to court records:

The first incident occurred on August 25, 1978, at the Citgo in Shorewood. Hall shot a clerk in the face below the right eye. The shot could have been fatal, but the bullet did not strike vital organs, lodging in his neck. This clerk lived.

The second incident occurred six days later at the White Hen Pantry on Teutonia Avenue. The shooting was wanton. The clerk was ringing up a sale of cigarettes for Hall when Hall shot him in the left side of the head. This victim also lived.

Gene Paul Opalewski was an attendant at the Clark station at 5909 West Good Hope Road, Milwaukee. He was murdered during an armed robbery in the early morning hours (between 3 and 4:23 a.m.) of September 1, 1978.

On Sept. 1, a Milwaukee police officer was planted at the White Hen Pantry on Teutonia. He arrested Hall when he came into the store, and found a pistol with a live cartridge on his body.

The bullets from all three armed robberies matched Hall’s pistol.

“Opalewski was found lying on the floor in the cashier’s booth just behind the door. The cashier booth’s door was found unlocked at the time the police discovered Opalewski and there were half-dollars on the floor and around the victim’s body as well as in his right hand, while the cash register was empty of all currency.”

Hall said he had purchased about $5 of gas.