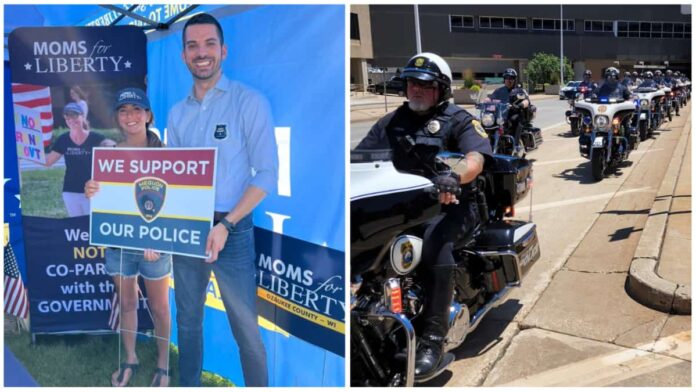 Wisconsin Right Now previously documented that the number of sworn Milwaukee police officers was down at least 18% percent since 1995.

Eric Toney, the GOP candidate running for Wisconsin’s Attorney General, said Milwaukee was one of America’s most dangerous cities. He has outlined a detailed plan to combat crime and refocus the mission of the Attorney General’s office from partisan politics to public safety.

The Fond du Lac district attorney cited homicides within the city are on track to break the record of 193 set in 2021.

Yet, despite the reputation for violence, the city of Milwaukee police department has been arresting fewer and fewer people over the past nine years. And the number of sworn officers is way down.

“Sadly, Josh Kaul has had two years to stop this homicide epidemic, but he’s failed us because the real solutions do not fit his woke, liberal political agenda,” said Toney.

Toney was recently joined by the Milwaukee Police Association, Fraternal Order of Police, and Dodge County Sheriff Dale Schmidt as Toney “renewed a call for the Department of Justice to obtain original jurisdiction to address the historic level of homicides and drug deaths in Milwaukee.” He also called for more police officers on the streets, the ability to hold violent criminals without bail, fix the state crime lab “mess” under Josh Kaul, and fill prosecutor positions that Kaul has left vacant.

The decline in arrests comes at a time when police were going on more dispatched assignments than in the past.

“The Milwaukee Police Department has not evaluated historical data related to arrests,” said Sgt. Efrain Cornejo, spokesman for the department. “We remain committed to working with our community and system partners to build sustainable healthy neighborhoods, free of crime and maintained by positive relationships.”

Milwaukee’s police department falls in line with numerous other police forces in the country that have seen a large reduction in arrests.

In a news release, Toney outlined this plan, in his words:

“First, more – not less – cops on the streets. Toney will work with the incoming governor to provide additional funds to local law enforcement including Milwaukee to add more police officers and provide additional judicial resources to speed up our backlogged court system. We should also provide police agencies the funds to pay the salary of new recruits while they attend the police academy and the cost of training to address the recruitment difficulties law enforcement sees across Wisconsin.Second, I will fill the vacant prosecutor and DCI positions that Kaul left unfilled for over a year, and fix the mess he created at the state crime labs.  We must also add at least 10 additional criminal prosecutors and additional DCI agents to DOJ that work with local law enforcement to investigate and prosecute violent crime throughout Wisconsin.  Kaul has reduced the effectiveness of the Wisconsin Crime Labs despite testing nearly 30% less items in comparison to former Attorney General Brad Schimel.Third, the DOJ must obtain original criminal jurisdiction within Milwaukee County. With the expanded resources this would allow the DOJ to better work with local law enforcement and prosecutors in Milwaukee County to take on hundreds of cases that Milwaukee is either unable or unwilling to prosecute.Fourth, implement mandatory minimums for violent crime.  Five, revise cash bail to allow violent criminals to be held with no bail.”

This article was written and reported by Center Square with several additions by Wisconsin Right Now.