‘Tony Evers Is In Trouble’: Michels in Margin of Error in Poll, Gains With Independents 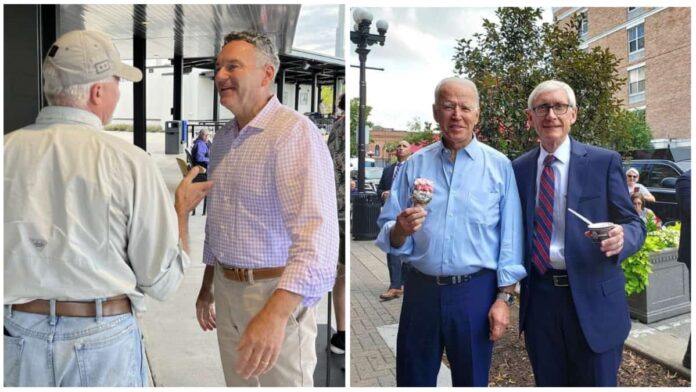 The new Marquette poll shows a tight race for governor, but bad news for Ron Johnson.

It’s a 2-point race for governor. Businessman Tim Michels is in the margin of error against Democratic Gov. Tony Evers.

The poll shows that Michels is gaining ground with independents needed to win the election, whereas Evers is losing it. Evers’ job approval rating has dropped slightly since February, and 56% think the state is on the wrong track.

But that’s in the margin of error, and those data points all add up to this: Evers is showing weakness and is beatable. But it won’t be easy. The poll also showed that some voters – almost 1/4 – don’t know enough about Michels to have an opinion on some questions relating to him. Who defines the candidate first will be important.

“Tony Evers is in trouble. Tim Michels was at zero percent in the polls in April and has been underestimated ever since,” said Patrick McNulty, Michels’ campaign manager. “But we’re building the campaign that grows every day. You need to look no further than the tens of millions in out-of-state special interest money flooding in to prop up Tony Evers to know everyone realizes Wisconsin is on the wrong track.”

Noted the pollsters, “These responses include those who are undecided but who say they lean toward supporting a candidate. In June, 48% supported Evers and 41% favored Michels.”

However, the poll, which was released on August 17, 2022, also shows a huge swing against U.S. Sen. Ron Johnson in favor of Lt. Gov. Mandela Barnes since June. Some insiders think that number is too wild of a shift to be plausible. If so, and the poll is inaccurately measuring Republican support, that could be even better news for Michels.

“In the race for U.S. Senate, Democrat Mandela Barnes is supported by 51% and incumbent Republican Sen. Ron Johnson is the choice of 44%, while 1% say ‘neither,’ 3% say they don’t know and 1% decline to answer. Vote preference includes those who say they are undecided but who say they lean toward a candidate. In the June poll, 46% preferred Barnes and 44% chose Johnson,” the poll said.

People indicated that they were most concerned about inflation, gun violence, and crime, which are issues that may play to Republican strengths. Most people in the poll opposed the decision to overturn Roe vs. Wade, but that issue is not ranking highest among people’s concerns, showing that concerns about the economy and crime could be a stronger driver of people’s votes, the poll said.

That’s all according to the latest Marquette University Law School poll. The poll infamously underestimated Donald Trump voters in 2016, but it’s generally regarded as accurate.

However, the poll does show that the governor’s race is going to be an absolute battle for every vote and, of course, a turn out and enthusiasm game. The enthusiasm gap which favored Republicans in the last Marquette poll in June has leveled out. “83% of Republicans, 82% of Democrats, and 66% of independents say they are ‘absolutely certain’ to vote in November,” the pollsters say. The Roe v. Wade decision may have energized some Democrats since the last poll.

The margin widens considerably when all registered voters are included, not just those who are certain or very likely to vote.

The pollsters added, “In @mulawpoll in mid-June, 48% supported Evers and 41% supported Michels.”

They noted, “Job performance of Governor Evers: Overall, 47% of registered WI voters approve, 45% disapprove. In June, it was 48% approve and 45% disapprove.”