Don’t Ignore the GOP Grassroots; They Could Determine the Election, Chair Says 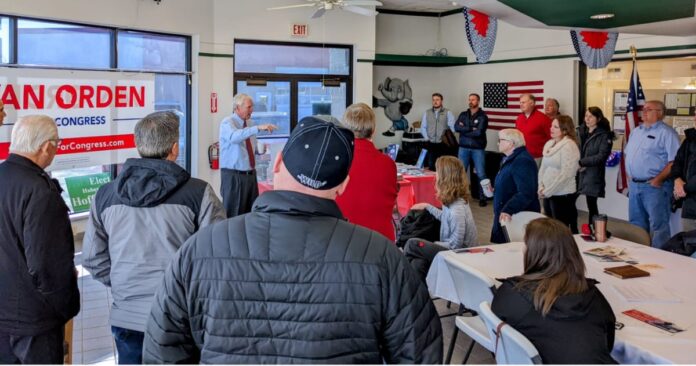 “I get the idea that you’re a political outsider, but everybody is not Donald Trump” – La Crosse County Republican Chair Bill Feehan

We received a phone call out of the blue from Bill Feehan. He’s a Republican business owner who is the La Crosse County Republican Chair and the GOP’s Third Congressional District Chair, one of just eight in the state.

Feehan wanted to stress the importance of county parties in local races for state Assembly and Senate, school and county boards, and so forth. He also wanted to urge Tim Michels, the Republican nominee for governor, to aggressively reach out to the Republican grassroots in his race for governor.

“The county party system has a lot of value. I believe the grassroots system is the best system,” said Feehan, noting that county parties are critical to the success of local conservative candidates because they recruit, support, train and help them win. He believes they’re also important to the governor’s race.

Feehan was responding to news that Michels skipped the Dane County Lincoln Day dinner hosted by that county’s GOP, the third largest in the state, as well as to a mass email sent out by Wisconsin Conservative Digest founder Bob Dohnal, who wrote that it was “time to switch strategies.” Dohnal wrote “we have a plan to win” the governor’s race and outlined how “we have passed the stage of going to the GOP caucus, Reagan dinners, pints and politics, and the backyard GOP BBQ.”

We asked Michels’ campaign whether Michels agrees with Dohnal’s plan and why he missed the Dane County event. They responded: “Following a well fought primary, Tim has spent his time focusing on building the broadest and widest campaign for the general election by bringing people together, planning out strategies and expanding staff,”  “This week, Tim is traveling around the state with the other candidates with a singular, unified focus – beating Tony Evers.”

Michels is meeting with local officials throughout the state this week and he was out meeting voters on Milwaukee’s south side on Monday, and Feehan hopes to get to know him better in La Crosse. But he was concerned by the response.

Feehan, who was a Rebecca Kleefisch supporter, said he is voting for Michels because he is the nominee and he “will do what I can to support him. I understand what is at stake here with Tony Evers.”

But he believes that Michels won’t win if he doesn’t reach out aggressively to county party volunteers, attend their events and conduct sincere outreach to heal primary wounds – and he wants him to win.

“There are a lot of very disappointed Rebecca Kleefisch supporters in the Republican Party of Wisconsin because of the nastiness of some of the attacks,” Feehan said. “There needs to be some work done to get those people back. There is no winning without those people in Wisconsin.” He’s worries some of them will “undervote,” choosing U.S. Sen. Ron Johnson but leaving governor blank.

“Tim Michels did not participate in any of the process with the county party system from January through the state convention. That is a vetting process,” said Feehan. (Michels entered the race in April).

He questioned “how we will elect Republicans across this state if we don’t have the organization to support these people. We need the support of people like Sen. Johnson and Tim Michels to come to our events. When those people show up, lots of people want to come. That’s how we raise the money we need. And when we raise that money, we pass it to other candidates. We become the volunteer workforce for these candidates – for county board, state Assembly, state Senate, and so forth. County parties are an integral part of those campaigns.”

Feehan noted that county parties have helped parents activated by school district mask mandates and other issues important to conservatives.

Feehan believes the idea that local volunteers who work hard at county party events are “insiders” or “establishment” is simplistic.

Asked about Michels’ strategy to bring new blue-collar voters to his side, Feehan said, “In the 3rd Congressional district, Trump’s already done a lot of that work. Look at how our district changed the past six to eight years.”

He noted that Republican state Sen. Pat Testin was elected in a district that had been Democratic for 44 years. Trump won the congressional district by more than five points in 2020. Feehan said that was a “transition” where a lot of conservative people and even Democrats – the classic “Reagan Democrat” type of voter – “working class people who traditionally voted Democrat” switched to the Republican candidates because “they could see the Democratic Party moving away from them.”

Some of those people are now officers in the local Republican party, he said. In other words, some of the people Dohnal talked about reaching – bowlers and duck hunters and the like – are also part of county parties.

“I get the idea that you’re a political outsider, but everybody is not Donald Trump,” he said.

Feehan’s point wasn’t that Michels shouldn’t reach out to broaden the tent by bringing in new voters – he thinks that’s great – but rather that he should not do it at the expense of the county parties, but rather in addition to them.

Feehan supported Kleefisch because he has known her “for 12 years” through the work she did to help local candidates in La Crosse County. He added, “I knew where she stood on everything. I honestly don’t know Tim Michels.” He said that former Gov. Scott Walker worked hard to reach out to the Republican grassroots.

“I have lots of questions, but I intend to support him,” he said.