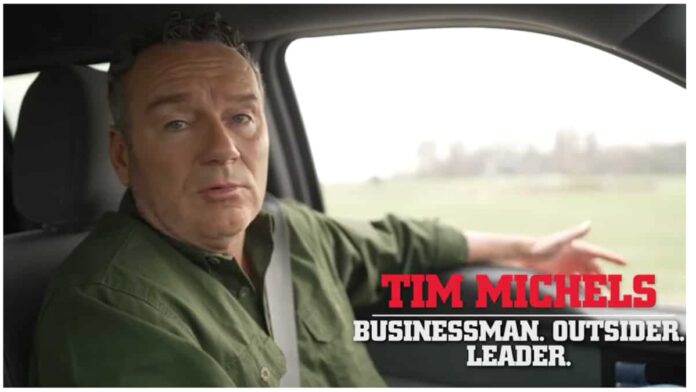 Businessman Tim Michels won the Republican primary for governor on Aug. 9, and he won it comfortably.

This was no easy feat; he defeated a well-financed former lieutenant governor for the state’s last Republican governor, a man still beloved with GOP primary voters and who cut advertisements for her besides.

Michels hadn’t been on the political stage since the Russ Feingold race in 2004. He didn’t enter the race until April. So how did he do it?

From the get go, Michels crafted a message that echoed Trump’s: Outsider businessman not beholden to special interest money.

That was the message another military veteran, Kevin Nicholson, was pushing until Michels jumped in. We lost track of how many people we spoke to said they were voting for Michels because “he was an outsider.” The message broke through.

Kleefisch argued that she wasn’t establishment but was harmed by endorsements from controversial figures like Mike Pence and Robin Vos. Whether either Michels or Kleefisch is an outsider is immaterial for the purpose of this post; the point is that this is the message Michels crafted, it broke through, and people liked it.

Michels helps run a very successful construction company with his brothers, so he was able to pour millions of dollars of his own money into the race – more than $10 million.

That means he was able to get that outsider narrative to a lot of voters. When we would ask people who said, “I like him because he’s an outsider” why they felt that way, they invariably mentioned his advertisements.

Outside groups spent more (Club for Growth spent $1.8 million). Kleefisch raised a lot of money – historical totals even – and outside groups came in big for her too, but it wasn’t enough.

Michels had the money to magnify his message.

The ability to self-fund, though, doesn’t guarantee victory. Other self-funders have been losing Republican primaries around the country.

There’s no question that Donald Trump can still play kingmaker in Republican primaries, and it’s a big deal to have the former Leader of the Free World land in the heart of your opponent’s base to verbally nuke her (and her husband).

Whether the president’s attacks on the Kleefisches were fair isn’t the point; the point is that Trump moves votes on the right. Never is that more true than when he goes hard negative.

Perhaps it wasn’t lost on people that Scott Walker was often rather tepid on Trump. He ran against him in the 2016 presidential primary, after all.

As of Aug. 3, before the Michels’ victory, NBC reported, “188 candidates backed by the former president have won primaries, 14 have lost and two dropped out or were disqualified before Election Day.” Some have questioned whether Trump’s primary picks are the best general election candidates in some states (Dr. Oz, for example), but that’s another story.

In GOP primaries, he’s a kingmaker. And he went ALL IN for Michels.

Trump was the closer.

4. Michels cut into Kleefisch’s margins in the “WOW” counties

Yes, Michels cobbled together rural voters all over the state and did well in portions of the Valley (like Trump.) But Michels can thank his victory in part to his strong performance in the WOW counties. These are the populous counties of Waukesha, Ozaukee, and Washington counties that helped ensure Scott Walker’s victories.

This article has an interesting breakdown of the WOW counties’ rural/suburban divide. “Within each county, Republicans in the larger municipalities tend to vote for establishment politicians, while voters in the more rural towns often swing toward their challengers. At the county level, Washington County usually offers the weakest support to establishment Republicans, as its population is the least suburbanized of the three,” it says. And that’s exactly what helped Michels.

It’s important to remember that Michels and his wife own a home in Waukesha County. Michels Corp. is located further north, but they’ve been a presence in the WOW counties.

Michels also did well in the southern suburbs of Milwaukee County, where, ironically perhaps, Scott Walker once flipped a lot of historically Democratic union type voters into his camp as a county executive candidate railing against an out-of-control pension scheme. It’s the blue collar voter who liked Trump – and Walker, once.

We heard from voters who said the FBI’s raid of Trump’s personal home the day before the election made them switch their votes from Kleefisch to Michels.

It also may have motivated some Trump voters to go to the polls. It’s impossible to know for sure how much this mattered, but we did hear it was happening.

There’s additional evidence for this. The Trafalgar pollster asked voters, “Does the FBI raid on President Trump increase your motivation to vote in the 2022 election?” More than 70 percent said yes.

Michels and outside groups supporting him went hard negative on Kleefisch in the final weeks.

We’re not assessing here whether it was true or unsavory; we are just saying it works (although Kleefisch is not a Chinese Communist sympathizer, and her husband actually lobbies for conservative causes.)

Voters were hit with a deluge of direct mail and negative ads. Kleefisch was the first to directly run negative ads in the race, of course.

6. Michels’ Company Is a Big Deal

Michels Corp. is no little company. It’s a big deal – one of the state’s largest employers.

It’s got a well-known presence in some areas of the state.

People have heard of it in some areas of the state, breeding familiarity with the candidate. Or they know somebody who works there.

A guy involved in staging Trump’s rally helped stage Michels’ and you could tell from the start.

The red imagery stood out. The red truck is becoming such a known thing that Tony Evers even ran an ad showing him (ridiculously) driving around in a red pickup truck. If it wasn’t memorable, Evers wouldn’t be trying to co-opt it.

The announcement rally with Michels flanked by construction workers in front of a red truck was masterful imagery. These are Trump’s “forgotten men.”

Voters often don’t want to look back to the past. They want to look to the future. Just ask Hillary Clinton. Joe Biden was an exception, but look how that worked out?

The candidates who win often craft positive messages about crafting a better future (“Make America Great Again” and even “Hope and Change.”)

Although Michels did not have such a memorable tagline (he’s trying to craft one around being a builder or fixing things), he was running against the second-in-command for a very divisive governor. Walker ticked off a lot of special interest groups with various decisions (or inaction) as governor. It was sort of an exhausting time.

Did people want to return to that? Were they worried it would be tougher to win?

Michels ran for office, but that was 18 years ago and most people don’t remember it or barely remember it. So he seemed like a fresher, newer face, not a return to the divisive battles of the past.

We’re not in the mood to bash a good woman who has worked hard for conservative causes for years, but we wouldn’t be honest if we didn’t admit that she had some weaknesses. She also had a lot of strengths, including a tenacious grit.

But some voters didn’t like her television reporter’s polished persona. We heard this from a lot of people, especially women.

We’ve heard from some women who are upset because they believe Kleefisch’s gender cost her. We wouldn’t go that far, but it’s something we heard.

The bottom line, though, is that she wasn’t a candidate without flaws.

Milwaukee’s conservative talkers mostly stayed neutral (unlike their counterparts in Wausau and Green Bay, who were anti-Michels. Take a look at how well Kleefisch did in those areas…)

Mark Belling, in particular, can make-or-break a candidate down south.

But he and other hosts stayed neutral (with the lone exception of Jay Weber, who was pro Michels).

Michels was not an unknown figure to the hosts. Belling remembers the Senate race.

Michels was supported by some powerful people, such as Reince Priebus.

If the talkers had been, say, all in for Kleefisch, it might have been a different story. But they weren’t. We’ve heard from readers who liked that they stayed neutral, and they asked tough questions that informed listeners, so it’s not a knock. We’re just saying that it matters. It is worth pondering how the pro-Walker turned Never Trumper Charlie Sykes might have altered this race if he was still on the air. Charlie helped build Walker through the pension revolt recall, and he used to carry a big stick. Instead, Sykes whipped out a column trashing Michels after the race. But that’s geared for an elite beltway Never Trumper audience, not the folks back home, who don’t listen to him anymore.