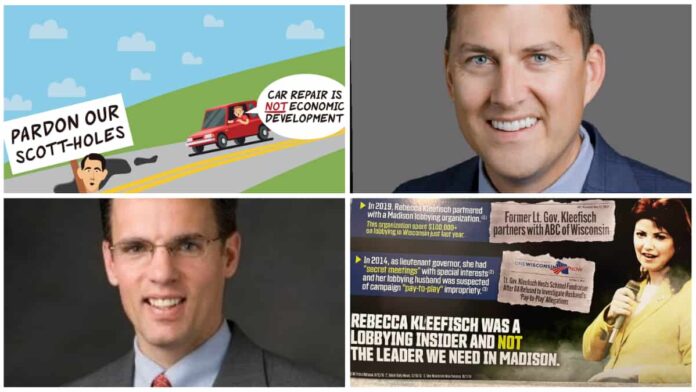 Attack ads against Rebecca Kleefisch are funded by a group that recently received money from a WEAC-funded organization run by the union president behind the infamous Scott Holes campaign. That campaign may have cost Scott Walker the last election.

The anti-Kleefisch group has deep ties to an operative who is both connected to the Michels campaign and to union lobbyist John Gard.

The funding source behind the “Sunrise for America Political Fund” group that sent out a recent barrage of negative direct mail pieces, television ads, and texts attacking Rebecca Kleefisch, her family, and former Republican Attorney General Brad Schimel, has been unmasked.

Campaign finance records show it’s Midwest Growth Inc., a group that has deep ties to Brandon Rosner, who is the former campaign manager to John Gard, the registered lobbyist for the International Union of Operating Engineers Local #139. That union was openly behind the infamous Scott Holes campaign. Scott Holes was a campaign against Walker by groups that were upset he would not fill the state transportation budget by raising the gas tax.

The reports filed August 1, 2022, by Sunrise in America Political Fund confirm that the group Midwest Growth Inc. gave it $350,000 in July, its sole funding source. See the report here. 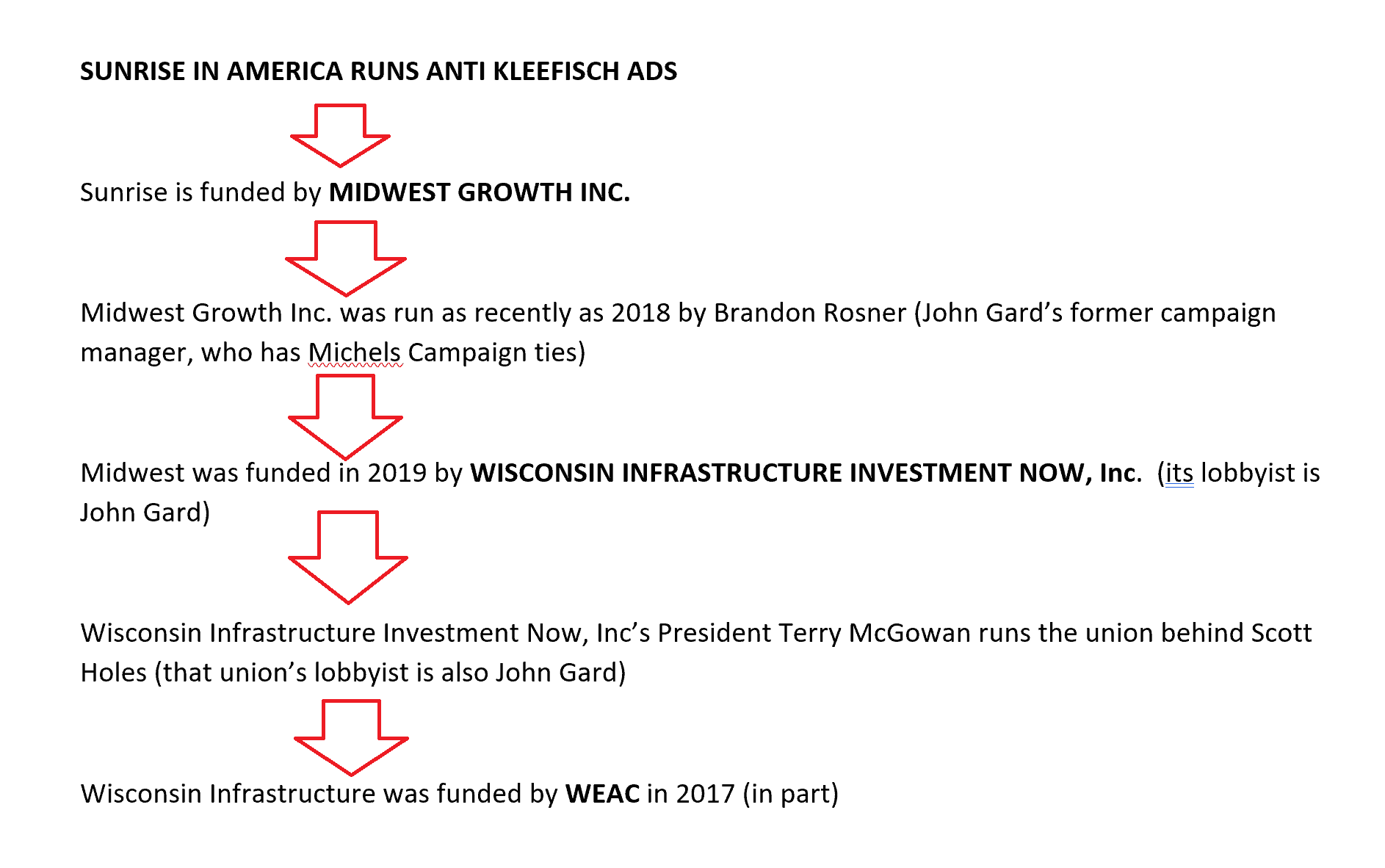 Gard, the former Republican Assembly Speaker, was blistered on the Mark Belling show years ago over his support for increasing the gas tax and has spoken publicly against Scott Walker’s prevailing wage reforms. Michels told Belling that he had not talked to union lobbyist John Gard for years when he got into the governor’s race.

McGowan publicly criticized Walker when the Scott Holes campaign to oust him was publicized during the 2018 election. WEAC, the teachers’ union that supports Democratic Gov. Tony Evers, gave Wisconsin Infrastructure Investment Now, Inc., $55,000 for operating expenses as recently as 2017, according to IRS tax forms.

John Gard is also the registered lobbyist for Wisconsin Infrastructure Investment Now, Inc. In 2021, its executive director was Robb Kahl.

As of April 2022, a Michels Corp. employee sat on the managerial board of another group called Construction Business Group. The Michels company is no longer listed on its website. At that time, Kahl, the former Democratic state assemblyman from Monona, was running CBG. He has repeatedly praised Gov. Evers’ efforts to raise the gas tax and criticized the Walker administration for holding the line on it. Kahl once said that a 10-cent increase in the gas tax wouldn’t “be enough.” CBG lists the union Operating Engineers 139 Local as a “partner organization.”

In 2019, the latest tax records available, McGowan’s Infrastructure group also funded a liberal organization, A Better Wisconsin Together, Inc., that has recently attacked all of the Republican candidates for governor.

We saw Brandon Rosner at the Michels’ campaign announcement event, which we covered. We asked him, for this story, to clarify his role in the Michels campaign. “My wife and I are longtime family friends with Tim and Barbara and unpaid volunteers,” he said in an August 2, 2022, text.

We asked him questions about his role in the Sunrise group, including whether he is currently running it, and whether Gard has anything to do with it, and he did not respond.

We asked the Michels’ campaign what Rosner’s role is with the campaign and for comment on Sunrise, including whether Michels repudiates its attacks. His campaign manager, Chris Walker, responded, “For over a month, Tim has been the target of millions of dollars of 100% negative, false attack ads. These have come both from the Kleefisch campaign and outside groups affiliated with her. All we can control is our own campaign ads.” (One of those outside groups, Freedom Wisconsin, is run by Scott Walker’s former campaign manager Stephan Thompson.)

Tax forms from 2018, 2017, and 2016 filed with the IRS list Brandon Rosner as the principal officer of Midwest Growth Inc. for those years. See the latest tax form here. Bruce Barrette and Luke Thompson are the other names associated with the group in those tax records. The group’s address appears to be a PO Box in Appleton, Wisconsin. More recent tax forms are not immediately available.

The Midwest Growth Inc. group that is funding the anti-Kleefisch ads has had tax-exempt status since 2016 with the IRS. When you put its EIN number in the IRS website, it mentions Brandon Rosner, although it says the page was last updated in November 2020:

Michels has insisted that he is not playing a role in negative campaigning, while criticizing negative ads the Kleefisch campaign has run against him. Kleefisch has tried to raise the fact that Michels and his company were involved for years, including in leadership positions, with groups that aggressively pushed to raise the gas tax in Wisconsin, as well as pushing against Scott Walker’s right-to-work and prevailing wage reforms. Michels has denied advocating for raising the gas tax and says he supports Walker’s reforms.

The Sunrise in America group has sent out some of the most scurrilous anti-Kleefisch advertising. “Sunrise in America is a state Super PAC that is working in opposition to Rebecca Kleefisch’s candidacy for Governor in Wisconsin,” its website says.

The group attacked her husband Joel Kleefisch and former Republican AG and DA Schimel, using as its source “One Wisconsin Now,” which is an extremely leftwing group that has made a cottage industry out of attacking Republicans. It declared that “Kleefisch is unfit to be our next governor. She is nothing but a Madison insider.”

Kleefisch’s campaign has run negative direct mail against Michels, including a piece showing Evers and Michels in a pea pod. They have also accused him of personally advocating for raising the gas tax, which he denies.

One Sunrise digital ad attacking Kleefisch has had almost 200,000 views.

Mark Belling wrote a column in late July referring to Sunrise as a “PAC backing Tim Michels.” Belling added, “Political action committees can take as much money as they want from donors, but by law, can not coordinate their activities with political campaigns.” 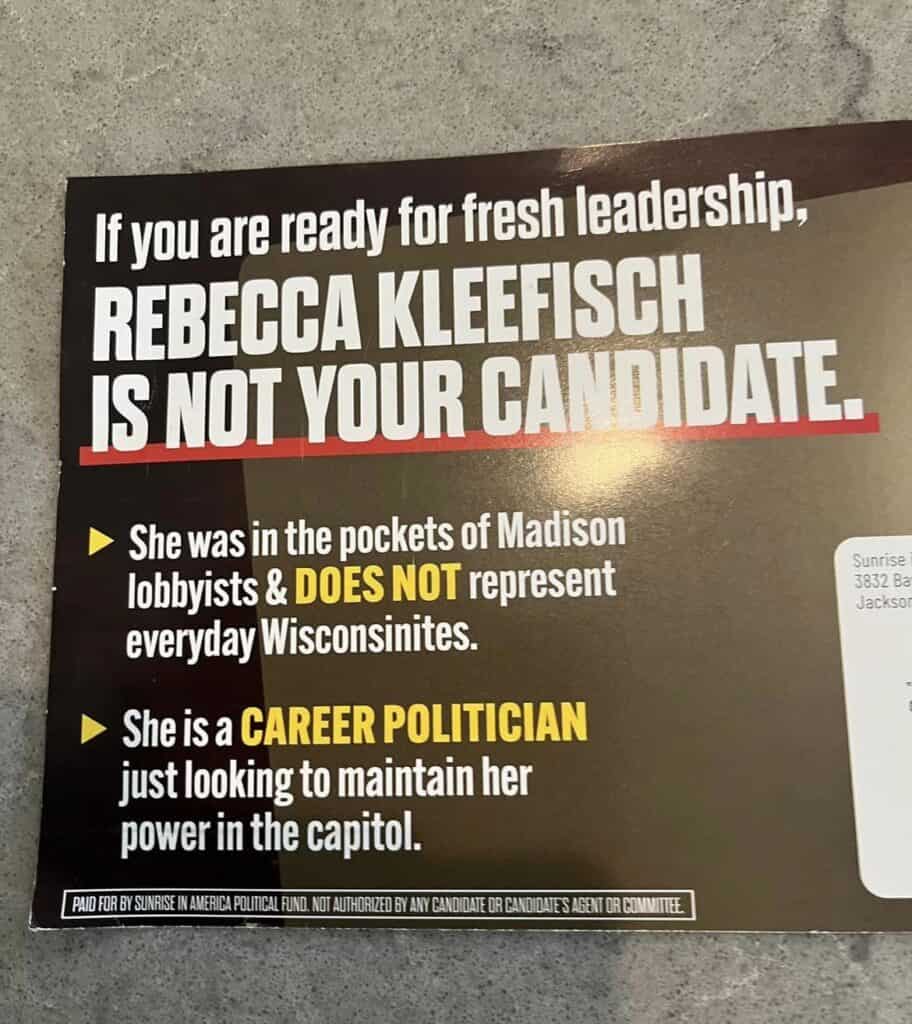 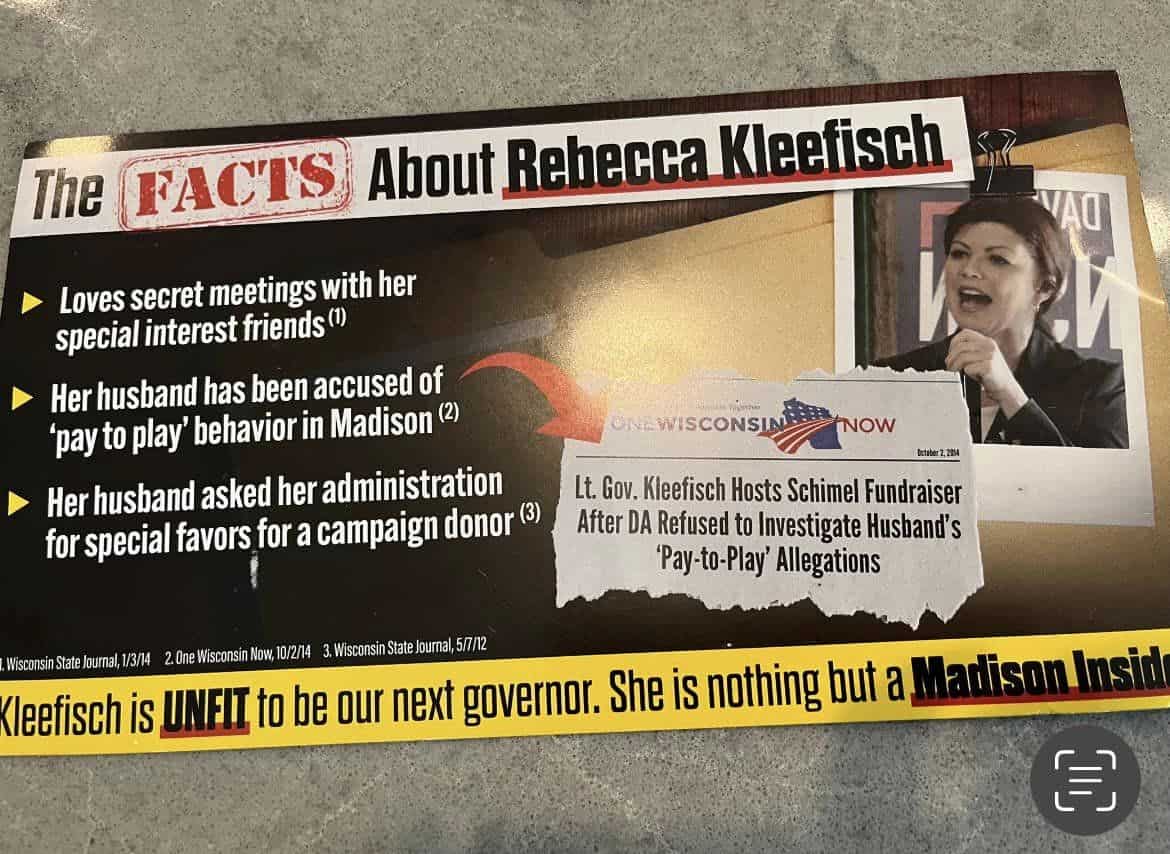 The group has also sent out texts accusing Kleefisch of working for lobbyists.

Kleefisch recorded videos about trade jobs for ABC Wisconsin, which employes lobbyists. That group endorsed Walker and lobbied for several of his reforms. Her husband lobbied for pro-life causes, disabled and sportsman groups, state records show.

Voters who receive the mailers or see the advertisements would think the Sunrise group is from Jacksonville, Florida. The only name listed in the report is a man named Adam Brandon, a failed U.S. House candidate in Florida.

However, buried in the report, you learn that the Rosner-affiliated group Midwest Growth Inc. of Appleton, Wisconsin, funneled $250,000 to Sunrise on July 13 and another $100,000 on July 22.

In 2018, Rosner placed ad buys targeting Republican legislator Andre Jacque and calling him a “career politician” for Midwest Growth Fund, according to the now-defunct conservative site Media Trackers. A 2016 article in the Milwaukee Journal Sentinel said that Barrette was a “retired dentist who is a longtime friend and contributor since 1993 to Gard’s past campaigns for the Assembly and Congress.”

Gard told the Journal Sentinel then that he and Barrette were “very good friends,” but he wasn’t involved in the Midwest Growth PAC. That Journal Sentinel article says that Gard was involved in a Republican Congressional primary, working against state Sen. Frank Lasee (R-De Pere), “whose legislative stances on unions conflict with those of Gard’s union client.”

Michels has denied involvement in Scott Holes and says he does not and has never supported efforts to raise the gas tax.

We asked Gard about his ties to Rosner and whether he has anything to do with Sunrise or its funding and did not hear back. Gard has a long history of working against Walker-era reforms. Kleefisch was Walker’s lieutenant governor.

Gard spoke out against Walker’s right to work reforms to prevent workers from being forced to pay union dues. “We just believe it’s an unnecessary intrusion,” he said.

The news outlet said in that video interview that Gard was affiliated with the Wisconsin Contractors Coalition. Wisconsin Public Radio reported that Michels Corporation “was a member of the Wisconsin Contractors Coalition, a group that organized in 2014 to fight the (right to work) proposal,” although candidate Michels, who co-owns Michels Corp., says he supports right to work. Gard was also involved in ads opposing right to work that were targeted at Republican legislators.

Rosner once ran unsuccessfully for a Waukesha County Assembly seat as a Republican. Tim and Barbara Michels held a fundraiser for Rosner during the Assembly race headlined by former Gov. Tommy Thompson, who is now supporting Michels in the governor’s race (and who, incidentally, “signed two gas tax increases into law.”) Michels also sent out an invitation along with Rosner and others inviting people to a fundraiser at Michels’ private home for U.S. Sen. Ron Johnson on April 21, 2022.

As recently as October 2020, Rosner asked Wisconsin Right Now if we would be willing to run an exclusive op-ed by Gard. We ran the piece for free, as we did all other submitted columns. That email exchange to us included a forward of an email between Gard and Rosner, showing they maintained recent ties.

According to a 2014 Milwaukee Journal Sentinel article, Rosner “served as campaign manager for then-Assembly Speaker John Gard’s unsuccessful congressional bid in 2006.” A week after he lost that race, Gard “put Rosner on the state payroll as his administrative assistant,” the article stated.

According to that Milwaukee Journal Sentinel article, in 2008, Rosner hosted a fundraiser for Democratic Assembly Minority Leader Peter Barca and later gave him money. The Journal Sentinel reported that Barca later helped lead opposition to Scott Walker’s Act 10 reforms. Rosner, then defined as a 34-year-old health care consultant, told the Journal Sentinel he was personal friends with Barca.

VoteSmart says Rosner also worked as a “Healthcare Policy Business Consultant” for the Wisconsin Department of Health Services during Walker’s administration and belongs to the Republican Party. His LinkedIn page says he works for Humana.