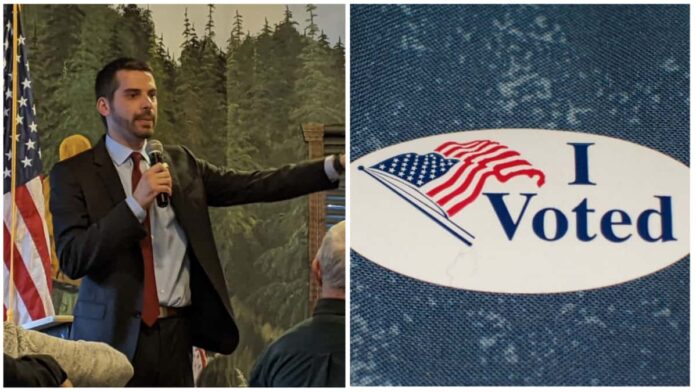 It’s the second conviction obtained by DA Eric Toney in a voter fraud case in less than two weeks.

In an August 3, 2022, news release, Toney, who is running for state Attorney General as a Republican, said the conviction is against Donald C. Holz, a convicted felon. Read the criminal complaint here.

“Holz was sentenced to 10 days jail and a $500 fine and court costs. Holz was on felony supervision stemming from a drunk driving conviction and ineligible to vote in the November 3, 2020 election. The investigation revealed that Holz illegally cast a ballot in that election.”

“Elections are the cornerstone of our democracy and we must defend the integrity of our electoral process at every turn to ensure the public has faith in our elections. Today is another step in that direction as this is the second defendant we have convicted of voter fraud from the November 3, 2020 election. We encourage people to exercise their right to vote but that they do so lawfully.”

According to the criminal complaint,

“On August 24, 2021 the Wisconsin Elections Commission employee Jodi Kitts submitted a letter and documentation to the Fond du Lac County District Attorney’s Office indicating that Donald C. Holz, the defendant, was on probation or parole for a felony conviction and voted in the November 3, 2020 election at the Fond du Lac Masonic Center located in Ward #1 of the City of Fond du Lac, Fond du Lac County, Wisconsin,” it says.

“The letter from Jodi Kitts also indicated that Donald Holz was on active probation beginning on October 8, 2019, which included election day November 3, 2020, and was scheduled to end probation on October 8, 2024.”

The complaint says authorities “reviewed a copy of the Donald Holz’s Wisconsin Voter Application which was signed by Donald Holz on November 3, 2020 in which the defendant listed his address as 400 N. Peters Ave Apt C-102 in the City and County of Fond du Lac, Wisconsin. Prior to signing the Application it required the defendant to acknowledge that ‘I am a qualified elector’ and ‘not otherwise disqualified from voting.'”

It’s the second conviction obtained by Toney in a voter fraud case in less than two weeks.

“Lawrence Klug was previously convicted of misdemeanor election fraud on July 21, 2022 for illegally voting in Fond du Lac County, while living in a different county. Klug was sentenced to a $500 fine and court costs,” the press release states.