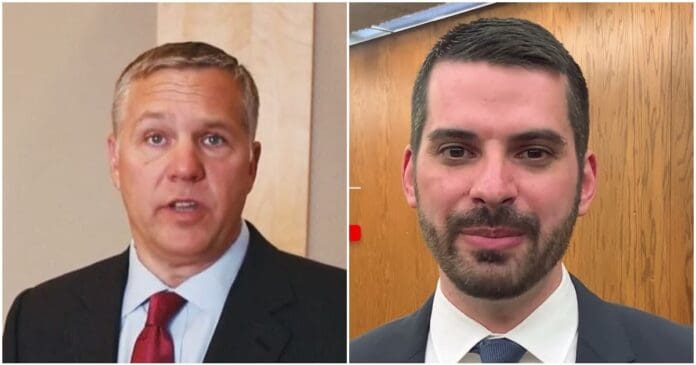 A group of 11 sheriffs from around Wisconsin slammed Republican attorney general candidate Adam Jarchow for running a “shameful campaign based on lies and misleading attacks” that they called “unparalleled in recent memory of political campaigns in the state” about his opponent in the GOP primary race for attorney general, Fond du Lac County District Attorney Eric Toney.

The group also said “the lies he’s spread about DA Toney would make Jarchow ineligible to be a police officer if he held that position in the state of Wisconsin.”

Jarchow, who has never prosecuted a criminal case and who has a history of anti-police and anti-public safety actions as a state legislator, has slammed Toney for charging 10 Fond du Lac County residents for violating Gov. Tony Evers’ original stay-at-home order in the early days of the pandemic. Wisconsin Right Now was the first to thoroughly report on that story.

Toney contends that he had the responsibility as a district attorney to enforce the rule of law, whether or not he agreed with the law and said the cases were later dismissed because the state Supreme Court subsequently struck down Evers’ second order. Toney later refused to enforce the governor’s mask mandate, calling it unlawful.

Here is the full statement from the sheriffs:

Integrity, honor, and truthfulness; those are qualities and traits we demand in someone planning to serve as Wisconsin’s “top cop.”  Strong moral character is a cornerstone of serving in law enforcement and leading the Department of Justice.  Sadly, Adam Jarchow is not living up to those qualities.

Jarchow is running a shameful campaign based on lies and misleading attacks against his Republican primary opponent, District Attorney Eric Toney. The level of misinformation his campaign is feeding voters and the media is perhaps unparalleled in recent memory of political campaigns in the state.  Voters are routinely fed a steady stream of emails, texts and social media posts with blatantly false and misleading information.

Jarchow’s false attacks have risen to such a level the made a public statement calling out Jarchow for his lack of truthfulness.  It appears Jarchow is running scared of Toney’s support among law enforcement and grassroots activist as Toney has won nearly every straw poll and he recently announced reaching 100 endorsements from sheriffs, district attorneys, and police chiefs.

Upon his campaign announcement Jarchow launched a negative website and digital ads. He then followed it up with a negative radio ad making false claims and attacks which were not refuted by Toney but drew the ire of the highly respected Wisconsin Fraternal Order of Police.

The WI FOP rarely issues such a stern statement about a candidate, but Jarchow deserved it.

When a police officer falsely reports information or is found to be untruthful in any manner, the officer is deemed by the court to be in violation of the Brady/Giglio standard and loses their job because they can no longer provide credible witness testimony.  As Jarchow seeks the office of “top cop,” the lies he’s spread about DA Toney would make Jarchow ineligible to be a police officer if he held that position in the state of Wisconsin.

Most recently Jarchow launched yet another negative website with additional false information. His gutter campaign seems to have no limit.

What’s clear is Jarchow’s campaign has nothing to do with his own prosecution skills or experience in a court room.  He has no experience whatsoever.  His campaign thus far has been to tear down District Attorney Toney instead of explaining to voters why he is the better choice.  His strategy is indicative of a professional politician — when you have little to no record of accomplishments relative to the office you’re seeking then you lie and spread false information to diminish your opponent.

Whether you’re a Democrat or Republican the last thing Wisconsin needs is someone who doesn’t know the law or has the decency to be honest and tell the truth.  Adam Jarchow has failed these most basic thresholds, and his actions are beneath the office of Wisconsin Attorney General.