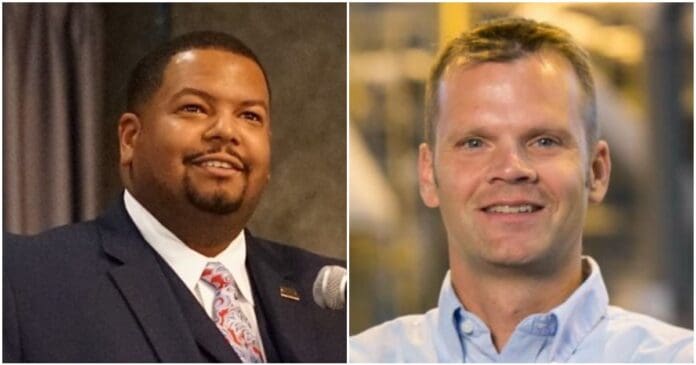 Only 7 of 33 state Senators responded to our questions asking whether they would fire Evers’ Parole Commission chair John Tate. Six said they would.

Devin LeMahieu, the state Senate’s Majority Leader, is refusing to call an extraordinary session to fire Tony Evers’ embattled Parole Commission chairman John Tate because he wants the issue to be an “albatross around the neck” of Evers in the November election.

He wasn’t the only state senator to place political tactics over public safety, but his position has the most weight. If LeMahieu won’t call the session, it won’t happen.

State Sen. Duey Stroebel told Wisconsin Right Now that he would fire Tate if it came to a vote, but he said he also believes it will help Republicans more politically not to act. He is also concerned that Republicans could be accused of racism because Tate is black.

“If we come in and take the vote, which will only result in an immediate and equally bad replacement, the left can frame the narrative as unprecedented, partisan, and possibly even racially motivated,” he said.

Five other state senators said they would vote to fire Tate, with most of them citing public safety reasons. The rest did not respond. No Senate Democrats responded.

Evers has also refused to fire Tate, even though the governor urged Tate to reverse the parole of wife-killer Douglas Balsewicz under great pressure last week. The Republican vow of inaction leaves Tate, who recently caused controversy by paroling and then rescinding the parole of Balsewicz, in charge of the powerful commission, with authority to release inmates into the community.

It also leaves victims’ families stuck in the middle of a political game of chicken between Evers and legislative Republicans. The family of murderer Douglas Balsewicz has called for either Evers or Republicans in the Senate to remove Tate because of what they believe was egregious decision-making and notification failures in that case.

LeMahieu‘s refusal comes after four Republican candidates for governor and attorney general urged the Republican-controlled Legislature to call the extraordinary session this week and exercise the majority’s power to reject Evers’ nominee. Even though Evers nominated Tate to the powerful position way back in 2019, the Senate has never confirmed or rejected him. Thus, they have the power to fire him.

In an email to Wisconsin Right Now, LeMahieu, a Republican from Sheboygan, made it blatantly clear that he thinks Republicans have more to gain politically if they don’t fire Tate, despite his initial decision to release a man who stabbed his wife 42 times.

“Wisconsin needs a new governor–plain and simple. This near-miss parole issue highlights that fact once again,” LeMahieu said. “The State Senate will not bail Tony Evers out from his soft-on-crime record. He should either withdraw his appointment or have to answer to the voters. If he refuses to remove John Tate and Milwaukee D.A. John Chisholm, that will remain a political albatross around his neck and a perfect opportunity for the Republican gubernatorial nominee to make the case to replace Tony Evers.”

In all, we reached out to all 33 state senators (21 Republicans, 12 Democrats) and asked them these questions:

1) Do you think the senate should go into extraordinary session this week and take a vote on Tate? Why or why not?

2) Will you vote to remove Tate as parole commission chairman? Why or why not?

Only seven responded, all Republicans. Of those, LeMahieu said he would not call a session for a vote, and 6 said they would vote to fire Tate. They are Julian Bradley, Dale Kooyenga, Duey Stroebel, Pat Testin, Andre Jacque, and Roger Roth.

“John Tate’s bungling of this parole case highlights an important issue that often flies under the radar: The Office of the Wisconsin Governor is responsible for an enormous list of appointments beyond agency secretaries.

Wisconsin needs a new governor–plain and simple. This near-miss parole issue highlights that fact once again. The State Senate will not bail Tony Evers out from his soft-on-crime record. He should either withdraw his appointment or have to answer to the voters. If he refuses to remove John Tate and Milwaukee D.A. John Chisholm, that will remain a political albatross around his neck and a perfect opportunity for the Republican gubernatorial nominee to make the case to replace Tony Evers.

Tony Evers should have to answer for John Tate and John Chisholm all summer and fall. If we take Tate off the table, the issue dies. We need a new governor more than we need John Tate replaced by another soft-on-crime liberal.”

Roth told WRN that he believed the Senate should enter into an extraordinary session and vote on Tate’s confirmation. Roth said he would vote to not confirm Tate. He called the situation “Liberalism gone amuck” and that it shows how broken the Evers administration really is.

“If there were ever a vote to be taken on confirming John Tate, I would vote against confirmation. That being said, I think it would be a mistake to bring in the Legislature to take such a vote at this time. John Tate is now the face of extreme liberal appointments Tony Evers must answer for. If we come in and take the vote, which will only result in an immediate and equally bad replacement, the left can frame the narrative as unprecedented, partisan, and possibly even racially motivated. All news coverage going forward now is about the Evers appointee doing X. I believe that is the coverage angle we want.”

“I fully support calling an extraordinary session to reject John Tate’s appointment. Public safety should be our top priority. If Tony Evers can’t be bothered to hold John Tate accountable for releasing violent criminals, the State Senate should.”

A spokesperson told us Kooyenga is on Army orders at Fort Bragg this week. “I was able to connect with Dale on this. He would love to vote to rescind Tate’s appointment if given the opportunity,” he said.

“Yes, I do believe that the Senate should go into extraordinary session to vote on John Tate’s confirmation, and yes, I would vote against his confirmation. Tate’s initial decision to parole Douglas Balsewicz is proof of his willingness to put the feelings of criminals – even murderers – above the rights of victims. The Senate must act to remove him if Governor Evers will not.”

“Yes, I would certainly support the Senate convening an extraordinary session for the purpose of rejecting John Tate’s appointment as Chairman of the Parole Commission.  I expressed my concerns regarding the appointment to the office of the Senate Judiciary and Public Safety Chair, Sen. Wanggaard, earlier this session in light of Mr. Tate’s troubling actions. Particularly as we solemnly commemorate Peace Officer Memorial Day this week, I am reminded of John Tate’s prior decision in 2020 to order the release of an unrepentant Lavelle Chambers, who was involved in the killing of Milwaukee police Sgt. Michael Tourmo, whose widow now resides in my district.

I am proud to be the Senate author of WI Act 227 (with Assembly author Rep. Wichgers), truth-in-sentencing legislation which will now prohibit criminals who commit violent offenses from receiving early release to parole or extended supervision.  Unfortunately, due to barriers to the constitutionality of ex post facto laws, Act 227 is not able to retroactively apply to convictions for violent crimes that occurred prior its enactment, as demonstrated by John Tate’s ability to make the egregious initial decision to release convicted murderer Douglas Balsewicz. Thank you for thorough reporting on this attempted miscarriage of justice.”