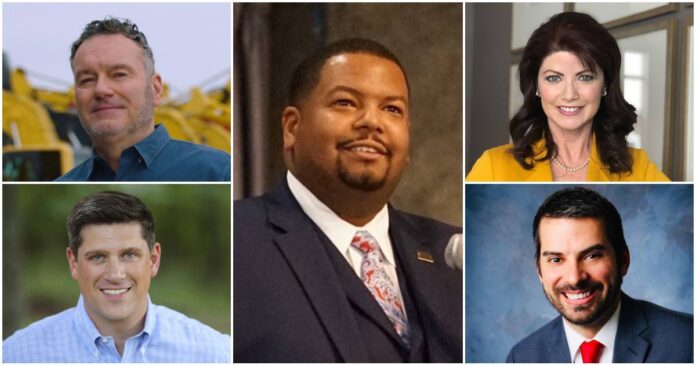 “I agree with Wisconsin Right Now’s position that the Senate should come back and take up his confirmation and reject it,” Michels said. “The State Senate should come into extraordinary session this week to fire Evers’ Parole Commissioner, John Tate,” Nicholson said. “I’ve urged as many senators to act as soon as possible, and I hope they will,” said Kleefisch.

We have repeatedly reached out to Republican Senate Majority Leader Devin LeMahieu on this question. He has not responded. Will the extraordinary pressure from all of the leading Republican candidates for governor get the state Senate to finally act?

We have reached out to every state senator for comment and asked if they will vote to remove Tate from the position. We will write a separate article on those responses.

Republican Attorney General candidate Eric Toney joined the call, saying, “Once again, now the Legislature has to clean up Evers’ failures on public safety. And the Legislature should fire Tate.”

The governor’s candidates previously called on Evers to fire Tate, but the governor has not. Kleefisch then unearthed the fact that the state Senate never confirmed Tate (Republicans let his confirmation dangle twice since 2019). That means the Republican controlled state Senate also has the power to fire Tate. Since the Legislature is not in session, and the Republican Convention will draw lawmakers back to Madison this Friday, and public safety is imperiled every single day Tate sits in office, Wisconsin Right Now has called for the extraordinary session to fire Tate.

The family of murder victim Johanna Balsewicz wants this to happen.

“I want to go on record that my family, and I demand for John Tate to be fired,” said Kim Binder Cornils, the sister of Johanna Balsewicz, who was murdered by her husband, Douglas, in 1997. Tate approved the wife killer for release. After significant pressure from the family, WRN, other media, and the GOP candidates, Evers flipped on Tate last Friday and urged him to rescind the parole decision, which Tate then did. But Tate remains in the powerful position, with unilateral authority to decide who gets out of prison early.

In short, Evers could fire Tate but hasn’t.

The Republican-controlled state Senate could have rejected Tate’s nomination as far back as 2019 but hasn’t.

“I can’t nor should we have to feel confident that Tate will make the right decisions in other cases like ours,” Binder Cornils said. “How many violent offenders has he released before we caught this one? I need answers. We need to look into all the releases since his time in this seat to make sure this didn’t happen to another family. One that maybe just didn’t think they could overturn Tate’s decision and now sits knowing their loved ones killer is back on the streets. Fire John Tate. We don’t need someone like him in the seat that thinks the criminals are more important then the survivors.”

Here are the candidates’ statements:

“There is more than enough proof that Tate should be fired, and the Senate has the power to do it. I’ve urged as many senators to act as soon as possible, and I hope they will. When I am governor, I promise you that our Parole Commission will be run by people who recognize victims’ voices and stand with law enforcement.”

“The fact that John Tate has never been approved by the State Senate is only part of the reason I called on Governor Evers to immediately put a halt to any further grants of parole from his commission in 2022. More troublesome is Tate’s judgment, and a commission that is led by him is a commission that needs to be stopped. I agree with Wisconsin Right Now’s position that the Senate should come back and take up his confirmation and reject it.”

“Yes the State Senate should come into extraordinary session this week to fire Evers’ Parole Commissioner, John Tate. As Governor, I would fire John Tate and will appoint a Parole Commissioner who has extensive law enforcement experience. We need strong, moral leadership to rebuild morale and capabilities of law enforcement in Wisconsin. As Governor, I will work with the legislature, sheriffs, police chiefs, municipal leaders, county executives, and boards across our state to set appropriate minimum sentences and bail requirements for violent charges and convictions to keep violent criminals off of Wisconsin’s streets.”

“Evers should have never appointed Tate, and now he needs to do the right thing and remove him, but he won’t because Tate fits with his liberal soft-on-crime policies. Once again, now the Legislature has to clean up Evers’ failures on public safety. And the Legislature should fire Tate. Disgustingly, our top cop Josh Kaul has been missing in action once again on a public safety issue affecting Wisconsin. His silence speaks volumes. He wont say anything because of his liberal soft-on-crime policies as well.”

“To know Tate made the remark ‘fighting his release shouldn’t be about vengeance is appalling. This was a fact check that he is for the criminal and not for the people. Besides being a huge slap in the face to my family and I,” Binder Cornils said.

“Learning on the streets instead of through Tate that Douglas Balsewicz was ready to be released is undermining the family’s rights!!! Sending a letter 7 days before his release is terrifying to say the least. Notification in a timely manner is key to survivors of murdered victims. And 7 days is not timely to Lear the release of a violent intentional killer. Learning the news from APnews that he reversed the release is heartbreaking. Tate didn’t even have the guts to contact our family first to give us the news. In fact he avoided my family at all cost while trying to speak to him about his decision for releasing Douglas.”

“All of these people work for us and we don’t even have a say in it. That needs to change. The politicians come up with laws to be passed but are they really asking THE PEOPLE…. shouldn’t they get our input. I think it is only fair.”