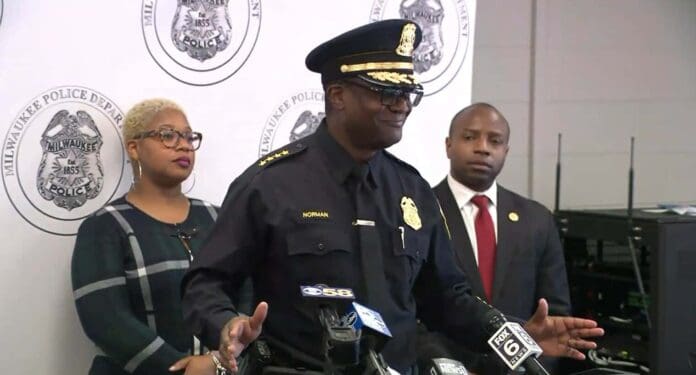 “…in this incident downtown, the city’s system worked,” Mayor Cavalier Johnson on the shootings that wounded 21 people.

The Milwaukee shooting press conference by Milwaukee Police Chief Jeffrey Norman, Mayor Cavalier Johnson, and Arnitta Holliman of the “Office of Violence Prevention” on Tuesday was a total train wreck.

The three officials presented no concrete plan for stopping the violence in the press conference they called about the 21 people shot downtown, other than an “enhanced” youth curfew (even though all of those arrested in the downtown shootings were adults).

Norman, who has yet to articulate a clear policing strategy, gave out misleading crime statistic claims, rambled about Buffalo, called people worried about Milwaukee crime shameful, and proclaimed that he can’t be expected to predict who will commit crimes because a lot of people who committed crimes, including on Friday, don’t have past criminal records. (Actually, two people arrested in the downtown mayhem were out on signature bonds for… pending crimes.) He also contradicted himself by revealing that “some arrestees were prohibited from possessing guns.”

The news media were also in fine form, with one reporter asking the three officials how the journalists should hold them accountable and measure their effectiveness. Isn’t it the media’s job to figure that out? Journalists didn’t ask previous chiefs how to hold them accountable; they jumped all over them even during eras of crime reduction.

For his part, Johnson dodged the reporter’s question about how people should measure his effectiveness and hold him accountable by trashing Republicans in the Legislature over gun laws, even though one of the two people arrested has a pending felon in possession charge. In other words, the behavior was already illegal. Unbelievably, in his most jawdropping moment, Johnson claimed that “in this incident downtown, the city’s system worked. The police caught the people, took guns off the street, arrested those responsible. We are doing our part.” (Actually, only 2 of the 11 people arrested were shooters).

Holliman, who runs the “Office of Violence Prevention,” said there’s no real way to measure its success because the violence “interrupters” can’t talk about a lot of what they do (which is quite convenient. We filed an open records request in February for detailed budgetary information. It’s still pending). Her big plan to stop the unprecedented carnage? A “community forum and call to action” at UWM, although she couldn’t remember the date. She revealed the OVP targets neighborhoods where there are the most shootings (when police do that, they’re accused of racism).

We have an idea: Let’s judge the Office of Violence Prevention ineffective if homicide and non-fatal shootings continue to rise since, you know, they are.

You can’t make this stuff up.

No one said the obvious. That the city needs way more cops. That it needs a chief with an actual strategy (read: Broken Windows). That the DA needs to start prosecuting more serious felonies. That the court system needs to fix the backlog so that repeat criminals are not out on the streets for so long awaiting trial. That the sheriff needs to fix the jail staffing crisis, the attorney general the crime lab backlogs, the governor the parole commission, and the chief judge needs to stop choosing court commissioners who release people accused of serious felonies on signature bonds.

The chief judge, attorney general and DA should have been in the room but weren’t.

Norman, Johnson and Holliman won’t say the above things because those are common-sense policies they either A) opposed in the past and B) they hurt Democrats.

One reporter asked Norman if the cops were outgunned and outmanned, and he started rambling about the “same narrative” existing across the nation. His point seems to be that, because other cities are also experiencing crime waves, it’s not his fault that Milwaukee is too. In other words, he was attempting to cast the record homicide numbers as somehow out of his control. But he is getting paid to come up with strategies to mitigate crime in Milwaukee, not California.

Norman said he should be judged in part on crime statistics. He stated, “if you saw before this incident, we were under. So if you want report out, let’s report out that not only were we under before this ill-fated incident but also that we’re under in many other categories in regards to our crime reporting. We are still under overall in our part 1 crimes at this point of time.”

Norman demanded, “Tell me where the safe haven is at,” implying there is none (Actually, it’s pretty safe in a lot of communities throughout Wisconsin and the country…just not in places with Jeffrey Norman as police chief.)

Norman claimed that there are a “number of situations where individuals had no criminal record even in this situation. How am I supposed to understand who is supposed to be our next shooter?” (We remember the days when Milwaukee police focused on repeat offenders because, well, you sort of can predict who will re-offend in many cases.) Furthermore, the only two people charged so far in the downtown shootings had pending criminal cases for which they were released on signature bonds.

The chief proclaimed that the “downtown area is safe,” then outlined statistics showing it’s not safe at all; three shootings that broke out on Friday, May 13, 2022, between a two-hour span in a small area near downtown, with 21 people shot.

He said 11 guns were recovered, 10 involved in the incident where 17 people were shot, and 1 from a triple shooting shortly before. Nine of the recovered guns had been fired. Eleven people ages 19 to 30 were arrested, but only two of them were ID’d as shooters. He said the largest mass shooting came because of a dispute between two groups.

In other words, a lot of people were running around with illegal guns. That sounds very unsafe to us.

Norman rambled on about the Office of Violence Prevention, saying it helps “alleviate or mediate these conflict situations,” then played a video showing two people whipping out guns and firing them in a crowded area downtown.

“This is a safe community,” he repeated.

Johnson proclaimed that the violence was “totally unacceptable” and used a convoluted analogy about testing. Asked how his effectiveness should be judged, he said state officials “should be asked that question.”

At times, the chief did not even make sense. At one point, he said: “We’re not alone. So, I understand in regards to accountability, I understand that we need to make sure that we’re doing all our efforts, but there’s challenges, that it is definitely a, um, a mind boggler in regards to who wants to put their own life in jeopardy because, you know, the prison time is real and the issues especially as you see what is going on in Buffalo, there may be a death penalty involved, so we need to be very careful with these behaviors that we’re not keeping ourselves in check with.”

The real mind-boggler is how exactly did he become chief?

“We’re just left picking up the pieces. We have to do the clean-up,” Johnson said, mentioning state gun policies.

On the city side, he said that police were “our primary law enforcement tool,” leaving out the fact that he refused to commit to adding more cops percentage-wise when he was running for mayor.