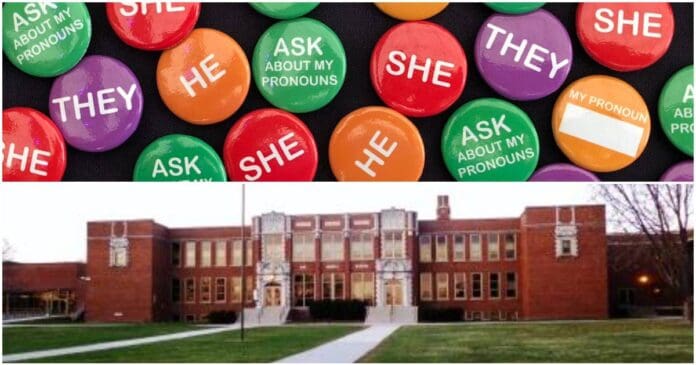 “I received a phone call from the principal over at the elementary school, forewarning me; letting me know that I was going to be receiving an email with sexual harassment allegations against my son,” -Parent Rosemary Rabidoux

The Kiel Area School District is accusing three eighth-grade boys of sexual harassment for using “incorrect pronouns” when referring to a classmate, according to The Wisconsin Institute for Law & Liberty (WILL).

Attorneys for WILL sent a letter to district administrators urging the district to drop a Title IX complaint and investigation against the boys.

WILL’s letter grounds its objection on the First Amendment, saying the boys used protected speech. “The mere use of biologically correct pronouns not only does not constitute sexual harassment under Title IX or the District’s own policy,” WILL wrote in a news release.

The Kiel Area School District responded in a statement to WBAY-TV: “The KASD prohibits all forms of bullying and harassment in accordance with all laws, including Title IX, and will continue to support ALL students regardless of race, color, religion, national origin, ancestry, creed, pregnancy, marital status, parental status, sexual orientation, sex (including transgender status, change of sex or gender identity), or physical, mental, emotional or learning disability (‘Protected Classes’) in any of its student programs and activities; this is consistent with school board policy. We do not comment on any student matters.”

But WILL says that Kiel is in the wrong.

“School administrators can’t force minor students to comply with their preferred mode of speaking,” WILL Deputy Counsel, Luke Berg, said. “And they certainly shouldn’t be slapping eighth graders with Title IX investigations for what amounts to protected speech. This is a terrible precedent to set, with enormous ramifications.”

“I received a phone call from the principal over at the elementary school, forewarning me; letting me know that I was going to be receiving an email with sexual harassment allegations against my son,” Rosemary Rabidoux, a parent of one of the accused boys, told Fox 11 News.

“I immediately went into shock. I’m thinking, sexual harassment? That’s rape, that’s inappropriate touching, that’s incest” Rabidoux continued. “What has my son done?” She says she was told he wouldn’t call a student they and them but says he was defending a classmate.

“She had been screaming at one of Braden’s friends to use proper pronouns, calling him profanity, and this friend is very soft-spoken, and kind of just sunk down into his chair,” Rabidoux said to Fox news. “Braden finally came up, defending him, saying ‘He doesn’t have to use proper pronouns, it’s his constitutional right to not use, you can’t make him say things.’”

Will provided this background:

“Three eighth grade students in the Kiel Area School District were notified of a Title IX complaint and investigation for sexual harassment for using a biologically correct pronoun when referring to a classmate, instead of the student’s preferred pronoun of ‘they/them.'”

The District’s position appears to be that “once a student informs others of alternate, preferred pronouns, any subsequent ‘mispronouncing’ automatically constitutes punishable sexual harassment under Title IX.”

“Sexual harassment, as defined in both Title IX and the Kiel Area School District’s policy, typically covers things like rape, sexual assault, dating violence, stalking, inappropriate touching, and quid pro quo sexual favors. None of that—or anything even close to it—is alleged in the complaint. While there is a catchall for ‘unwelcome conduct’ that is ‘so severe, pervasive, and objectively offensive that it effectively denies a person equal access to education,’ the mere use of a biologically correct pronoun, without significantly more, does not count, and if it did, it would violate the First Amendment. Schools of course can and should deal with teasing and bullying, but using so-called ‘incorrect pronouns’ alone is not punishable, without more.”

Further, the Kiel Area School District has also failed to follow Title IX procedures and its own process, WILL wrote.

“Both the District’s policy and Title IX regulations require notice of the allegations before beginning any investigation so that the accused has ‘sufficient time to prepare a response before any initial interview.’ The District failed to provide a detailed notice of the allegations, instead providing only a generic letter, one day before the District sought to question the minor students, stating that the boys were accused of ‘using incorrect pronouns.’ The District initiated its investigation and conducted interviews without first providing additional details or giving the boys and their families time to prepare.”

The WILL press release concludes: “What the District calls ‘mispronouning’ does not amount to sexual harassment under Title IX as a matter of law. And the District’s conduct infringes on the First Amendment and Due Process rights of the students. WILL’s letter urges the District to immediately end its investigation, dismiss the complaints, and remove the complaints from the students’ records.”