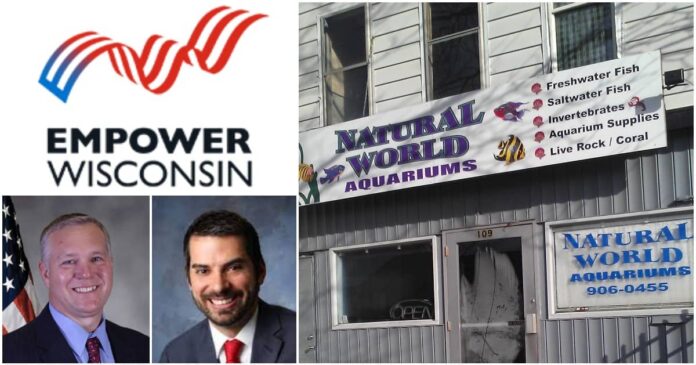 The unfair attacks came from a website that Toney’s primary opponent recently helped run and quoted a defense attorney tied to the man he defeated to become DA.

Political attacks accusing Republican District Attorney Eric Toney, a candidate for Attorney General, of unfairly going after a pet shop owner for selling an invasive species, a form of Mexican crayfish, are unfair and leave out key information.

The attacks are framed to exact maximum damage against Toney, the only Republican in the race who has ever prosecuted a criminal case. Toney, former legislator Adam Jarchow, and attorney Karen Mueller are vying to go against Democrat Josh Kaul in the fall.

We started seeing the crayfish story everywhere, pushed hard by Jarchow and his allies, and on the surface of it, they made Toney sound terrible, so we decided to look into it and see what it was all about. They are trying to create a narrative against Toney, a rule-of-law style prosecutor, as an over-zealous prosecutor running around targeting small businesses. At quick read, you’d think that Toney had aggressively gone after an elderly pet shop owner for selling harmless crayfish, filing criminal charges against her. However, that’s not true.

In fact, a Wisconsin Right Now investigation has found, Toney and his office did not file the tickets; the pet shop owner was only cited, not criminally charged; the owner was given many warnings; the owner was educated in the past on the invasive species; crayfish can cause severe harm to native populations; and the owner allegedly gave authorities information that was contradicted by invoices. Furthermore, the story that made Toney look bad was pushed by a website, Empower Wisconsin, that Toney’s primary opponent, Adam Jarchow, recently helped lead, a fact not disclosed to readers of the story, who were left to believe a neutral news site was reporting it.

The store owner’s attorney, who is quoted in that story, has ties to the district attorney Toney defeated to take office and once gave money to a defense attorney later appointed to the bench by Democratic Gov. Tony Evers.

Wisconsin Right Now’s mission is to educate voters about their choices by verifying facts.

To be clear, we don’t like some of the DNR’s overzealous and selective enforcement policies either. However, invasive species can be a different matter. They are often very harmful to the ecosystem, and court documents show the investigation went harder at wholesalers, tracking down invasive species sales all over Wisconsin, not just this one pet store. Read about the rules behind invasive species here.

Here are some key facts that provide additional context and which you may not know from the political hit:

1. Toney and his office did not issue the tickets or file charges

DA Toney and his office did not file charges or issue citations against the pet shop or its owner. The DNR did that directly with the court. Although the Empower story later included a quote from Toney explaining this, the initial reporting did not. Some of the political attacks gave left this fact out as well.  “A District Attorney’s Office has no role in the filing of citations of this nature, which are filed with the court by the DNR, similar to how a speeding ticket is issued,” Toney confirmed.

The website that “broke the story” on the crayfish is Empower Wisconsin. Although its reporter is respected in conservative circles, Toney’s opponent in the Attorney General’s race, Adam Jarchow, was the president of Empower Wisconsin before running against Toney. Immediately after the Empower story on Toney, Jarchow whipped out a press release highlighting it and then amplified the claims on a negative website he created to trash Toney (none of which helps Republican efforts to defeat Josh Kaul come November). Empower did not disclose its ties to Jarchow to readers in the crayfish story.

3. The Ties to Toney’s opponent for District Attorney

The store owner’s attorney Kirk Everson is quoted in the story. Everson has ties to former DA Dan Kaminsky, who was defeated by Toney in the District Attorney’s election. He also has a reason to not like the DNR.

That’s because the DNR previously investigated an “accidental pheasant shooting” that left Kaminsky’s wife in the hospital with minor injuries. The shooter was Everson, who said he did not see Kaminsky. In 2012, Toney ousted Kaminsky in a Republican primary to become DA. The race centered around controversy over a plea deal Kaminsky gave to an insurance executive. Toney has focused his legal career as DA and now an AG candidate around the notion that the rule of law must be fairly applied to all, without special treatment.

A 2015 story on Everson says that he faced “a private reprimand for allegedly attempting to bribe a judge’s court assistant.” He was also accused of not showing up for the trial. ABA Journal reported, “The complaint accuses Everson of violating an ethical ban on conduct involving dishonesty, fraud, deceit or misrepresentation.” Everson said he was being railroaded.

The Empower Wisconsin story contains an interview with Everson, identifying him as the attorney for the pet shop owner.

No criminal charges were filed by the DNR against the pet shop owner. Tickets were issued.

The pet shop owner was also issued 185 warnings at the time of the citations, court documents show. No tickets were issued for crayfish purchased from one of the suppliers.

6. An educational approach had already been tried

The pet shop owner was educated in the past on the dangers of crayfish to the ecosystem. Court documents note that, as far back as 2012, the pet shop was visited by DNR staff, who educated the pet shop owner about prohibited crayfish and other invasive species and gave her an educational package, noting that she was in possession of “Camboba” (an aquatic plant) and was instructed how to dispose of it.

7. Crayfish can carry a plague and disrupt native populations

The crayfish are not harmless. They have been found to carry a plague, reduce amphibian populations, and reduce native crayfish populations when they get into the ecosystem, the DNR says. Court documents say the DNR indicates its warden explained to the owner that they wanted “to prevent the prohibited species from being released into the wild where it could cause ecological problems by outcompeting native animals.”

We asked why the crayfish are considered harmful, and she sent us to the DNR website, which explains, “Red swamp crayfish are omnivorous, feeding on aquatic plants, snails, insects, fish and amphibian eggs and young. They have been found to reduce amphibian populations in California and Spain through direct predation and competition for habitat. Populations have also led to declines in native crayfish species in Europe through competition and because they often carry the crayfish fungus plague.”

That site explains, “The red swamp crayfish originally inhabited the coastal gulf plain region from the Florida panhandle to Mexico. Now the red swamp crayfish can be found in areas of the southern Mississippi River drainage to Illinois. This species has the ability to tolerate brackish water, unusual for most crayfish. They also have been recorded to have the ability to cross several miles of relatively dry ground and can burrow into the ground during extended dry periods.”

The court documents refer to the crayfish in the store as “Mexicanus mini, procambarus mexicanus.”

Court documents allege that the store owner initially informed the warden that she “did not believe they had any locatable records of crayfish purchases,” but the warden noticed an invoice on the table and asked to look at it. It showed a purchase of 10 Mexicanus Mini crayfish, which were in a tank in the store. The warden then asked about a stack of invoices on the table and the pet shop owner allegedly flipped through them and “stated there was not information regarding crayfish in the stack of invoices.” The warden asked to look through them and found multiple crayfish orders in the invoices, the court documents claim.

The pet shop owner also told the warden the store had only purchased crayfish from a specific wholesaler, but invoices showed another, the documents alleged.

9. Tony Evers’ DNR has not provided information that could shed light on the DNR’s interactions with the owner

The DNR is under Tony Evers’ administration; we have requested audio that will shed light on some of the pet shop owner’s claims and we believe cast the interview in a different light than reported, but the DNR, so far, has not provided it, despite our open records request. Specifically, we want to see if Sharon Woolhether was accurate when she said the plain-clothed Department of Natural Resources agents were “rude and nasty” when they walked into her small tropical fish store. Of course, the Evers’ administration would have a vested interest in not wanting Toney to become AG.

It’s true that Toney’s office is now handling the case, although it didn’t issue the tickets. That’s how the process works. Asked why he hasn’t tossed the tickets, Eric Toney told us that he believes that he doesn’t have power to exempt small businesses from following the rule of law just because they are small businesses. Toney’s assistant prosecutor, who is handling the case, did make an offer to the pet shop owner in the case. Toney says he has never heard from the pet store owner or her attorney himself on this case.

The invasive species law was created by the Wisconsin Legislature, which could change it if there is concern and has not done so. District Attorneys do not have authority to change state law in Wisconsin. They aren’t the Legislature. Republicans control the Legislature and could make changes if warranted. Republicans say they don’t want activist DAs, but that’s exactly what Jarchow is trashing Toney for not being.

“District Attorneys and our Attorney General enforce laws as passed by the legislature and signed into law,” said Toney. “Josh Kaul picks and chooses the laws he will enforce and which laws he will ignore based on his political agenda,” Toney added, citing Kaul’s refusal to prosecute an abortion ban law in Wisconsin if Roe v. Wade is overturned.

Whether voters truly want a rule of law AG is up to them.

11. The DNR didn’t just go after the “Little guy,” but went at wholesalers hardest

The DNR’s operation went after an Illinois wholesaler hardest.