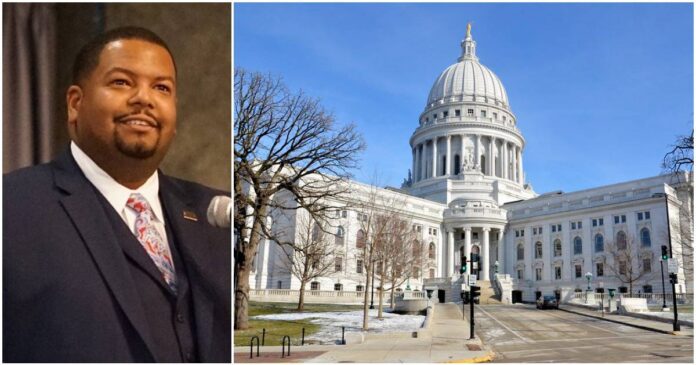 It turns out that Tate WAS NEVER CONFIRMED by the state Senate. That’s even though Evers nominated Tate twice to lead the Wisconsin Parole Commission, in 2019 and 2021. Tate has led the commission as a designee ever since.

Wisconsin Right Now is calling on the Wisconsin state Senate to go into an extraordinary session this week and immediately remove Parole Commission Chairperson-Designee John Tate since Gov. Tony Evers is showing no interest in doing it.

Why this week? Because the Wisconsin Republican Convention starts on May 20, and it will draw legislators back to Madison, where an extraordinary session could be held to fire Tate.

What are the grounds?

Tate’s disastrous decision, which he has now rescinded under great pressure, to grant early release to wife-killer Douglas Balsewicz. This was such an extreme failure of judgment that Republicans must make sure Evers’ appointee can not cause more harm.

The family of Balsewicz’s victim, Johanna Rose, went through living hell since finding out about the parole decision through the grapevine, trauma only relieved by the belated reversal, one they fought hard for. Republicans must ensure that no other family will suffer this trauma and remove Tate.

There were also egregious failures in notification. For example, Johanna’s daughter, Nikkole Nelson, who was age 2 when her mother was stabbed 42 times in front of her, was not told about the parole hearing, the family says. Tate wanted him released in less than 25 years of an 80-year sentence even though the judge opposed early release.

Theresa Cook, the sister of Johanna, is calling on both Republican and Democratic politicians, including U.S.  Gwen Moore, Judge Derek Mosley, and state Rep. Jonathan Brostoff to add their voices to the quest to fire Tate. She wants legislators in both parties to support the move to remove him.

Republicans should take the lead since they control the Legislature. Democrats in the state Senate, if they care about victims’ rights and domestic violence at all, must join them.

How can legislators fire Tate? It turns out that Tate WAS NEVER CONFIRMED by the state Senate. That’s even though Evers nominated Tate twice to lead the Parole Commission, in 2019 and 2021. Tate has led the commission as a designee ever since.

The governor would have no way to stop consideration of Tate other than to withdraw his appointment before he is rejected.

Republican gubernatorial candidate Rebecca Kleefisch first brought the fact that Tate has not yet been confirmed to the public’s attention. Kleefisch released the following statement, “Tony Evers’ liberal policies on crime are RADICALLY unpopular. It shouldn’t take an election year to do the right thing for Wisconsin families. John Tate must still be fired to prevent this from continuing.”

Kleefisch wrote: “If Tony Evers won’t fire Tate from the Parole Commission, then the State Senate should reject his confirmation.”

She is right. Wisconsin can not afford any more days of Evers’ disastrous appointee at the helm of the powerful commission. Tate has shown atrocious judgment. He has unilateral authority to determine which inmates up for parole should be released into the community.

We have lost complete confidence in him.

Evers did the right thing by calling on Tate to revoke the parole. Tate then did so. Unfortunately, Evers did this belatedly, which caused the family great pain, and he did it only after political pressure from Republican gubernatorial candidates.

Evers appointed Tate, who made his soft-on-crime philosophies completely clear from the outset, and Evers campaigned on cutting the state’s prison population in half. Furthermore, Evers has balked at firing Tate. This is incongruent with the governor’s strong words in his Friday letter correctly asking Tate to revoke the parole.

If the governor won’t remove Tate, Republicans in the Legislature must.

Yes, Republicans should not have allowed Tate’s nomination to dangle for so long. Yes, there’s a rationale not to act on Evers’ appointees now. Republicans didn’t confirm many of Evers’ appointments as they expect to win the gubernatorial race this year and would replace all of them immediately. Most appointments have defined terms (a set number of years). Tate’s is two. Cabinet Secretaries serve at the pleasure of the Governor, so while they must be confirmed, the Governor can replace them at any time.

Republicans had plenty of time to act. They should have rejected him long ago, but they can rectify that now.

Tate has outright refused to return the calls and emails of the family of victim Johanna Balsewicz. Although the system only needed to give the family 7 days notification of the release, the letter from Tate was postmarked May 10 but dated April 30. That means he was counting the 7 days from the date the letter was mailed, not received. Originally, Balsewicz was scheduled to be released on May 17. None of this is acceptable.

On May 10, Tate, a Racine alderman, told the Racine Journal-Times, in his only comments on the parole decision, that he was not reversing it, citing in part concerns the state would be sued. That was before he received pressure from Evers.

John Tate has openly championed releasing more inmates on parole and made anti-police comments on Twitter. On LinkedIn, he describes himself as a “founding member” of Our Wisconsin Revolution. That’s a group that openly works to end “truth-in-sentencing laws,” mandatory minimum sentences, and other tough-on-criminals measures.

In an interview with Wisconsin Right Now, Assembly Speaker Robin Vos indicated he was open to this idea and would look into it. Senate Majority Leader Devin LeMahieu would also need to agree but has not responded to our request for comment.

We also reached out to state Sen. Van Wanggaard, a Republican who leads the committee where Tate’s nomination was sent. Scott Kelly, his chief of staff, wrote us back. This is what he said:

“Mr. Tate did not receive a hearing or vote in our committee because Senator Wanggaard (and others) were concerned he was going to be too lenient in granting paroles, and that his views on justice (and juvenile justice, specifically) were too far out of the mainstream to be in the position to be in charge of granting paroles. These fears have been proven accurate in the last couple of days.

If the Senate were to come in to take a vote on him, and rejected him as Chair of the Parole Commission, he would be immediately removed. As to whether or not the Senate should come in, that’s a decision for Senator LeMahieu.

Until recently, Mr. Tate’s rhetoric has been worse than his actions as chair of the Parole Board. Obviously, we don’t agree with every decision he’s made and find his positions on crime to be concerning. For the most part though, it seems he’s been following the law and intent of the law as far as people sentenced under the ‘old law.’ Fear that he may do something reckless, (like release Balsewicz), and actually doing something reckless (actually releasing Balsewicz) are different things, and changes the dynamic. That’s why we’re looking to see where his appointment ‘is’ legislatively.

Given the pressure he must be receiving from Governor Evers to release prisoners early, it is entirely possible that Governor Evers would replace Tate with someone even further to the left.

More concerning is what Tate did in the case of (Douglas) Balsewicz. He apparently didn’t grant deference to the sentencing court. (i.e. Judge Diane Sykes saying no early release). He didn’t give deference to the family. Possibly, I don’t know, Tate didn’t let the family/victims know about Balsewicz’s hearing. We don’t know if the family spoke or wished to speak at the parole hearing. Tate may have violated the family’s Marsy’s Law rights. We don’t know. Were Tate’s actions (not just the release, but the process he used) in the Balsweicz case typical or an anomaly? Is there a bigger problem at the Evers/Tate Parole Board? That’s what we’ll be evaluating over the next couple of weeks. Hopefully, enterprising reporters will be doing the same.”

We will certainly be doing the same. We have far less faith, though, that Tate’s past actions have been good ones. Time will tell because we plan to review each one of them.

However, his decision on Balsewicz alone was so egregious that he needs to be fired. It’s well past time.

Here is an explanation of Extraordinary Sessions of the Legislature.