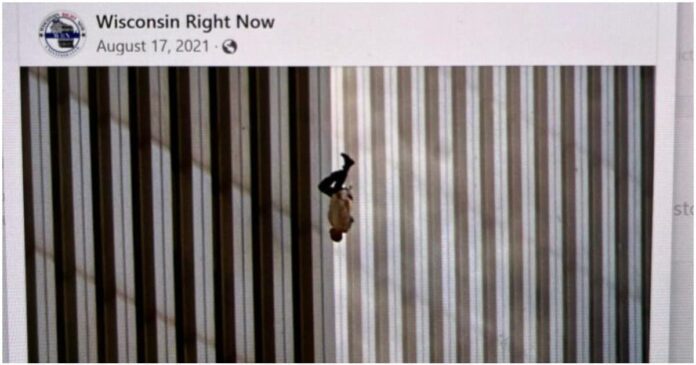 Ironically, the entire point of the famous Falling Man image and story was that the images of 9/11 should not be censored.

Facebook banned the page of Wisconsin’s award-winning conservative news site, Wisconsin Right Now, over a story share that included the iconic “Falling Man” image from Sept. 11, 2011 and discussed that famous story. According to Facebook, this share violated their community standards on suicide. However, the social media giant has allowed the same image to proliferate on MANY pages without problem, Wisconsin Right Now has documented.

Here’s what happened. Wisconsin’s top-ranked independent online conservative news site, which has had almost 8 million reads since 2020, shared a story in August 2021 of a news article comparing the famous Falling Man story with the people who died falling out of planes in Kabul, Afghanistan, during Joe Biden’s disastrous Afghanistan withdrawal. The Falling Man is a beautifully sensitive and evocative Esquire Magazine piece by Tom Junod that is widely considered one of the best pieces of journalism about 9/11.

In April 2022, Facebook unpublished Wisconsin Right Now’s Facebook page for this “violation,” saying the story share violated their codes of conduct on suicide and self-harm. It’s not clear why it took them so many months to do so, but in that time Wisconsin Right Now has become a leading source of news in Wisconsin, often correcting or reporting on stories the liberal media will not.

Facebook later reversed the violation, admitting it was in error, yet bizarrely left the page unpublished and has not responded to our requests for comment and reversal. (Note: One of our journalists uses her personal page to post on Wisconsin Right Now, which is why the screenshot below refers to JM Detra McBride. Facebook dinged her with this violation and unpublished Wisconsin Right Now’s page at the same time, with no other violations being claimed.) 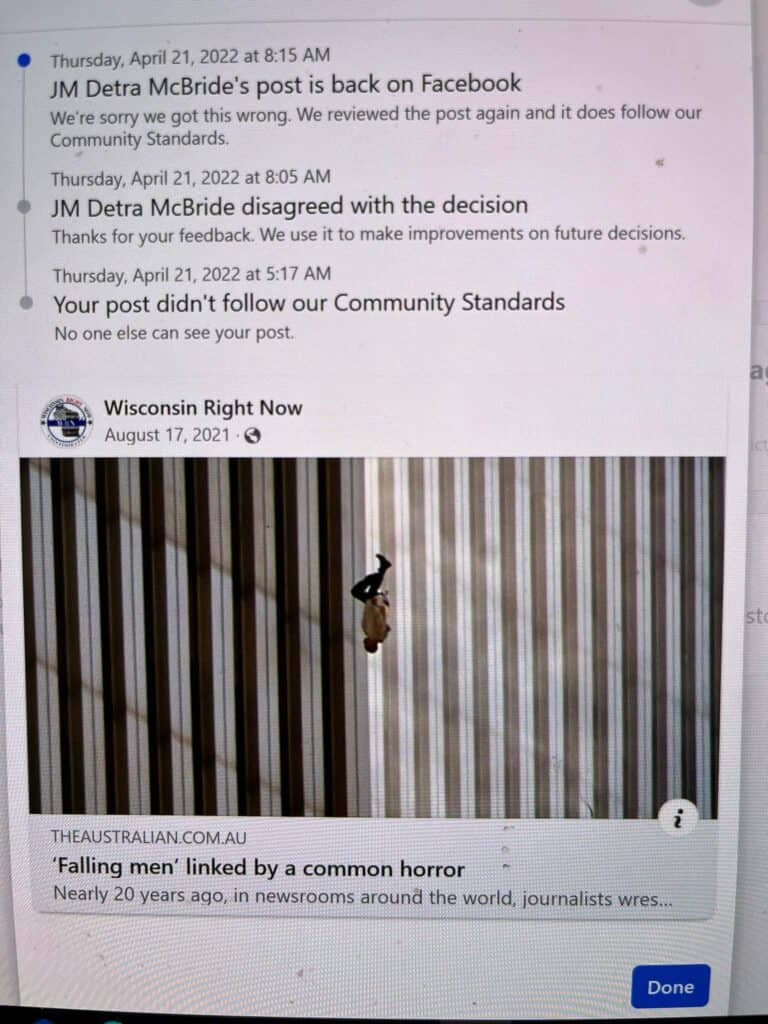 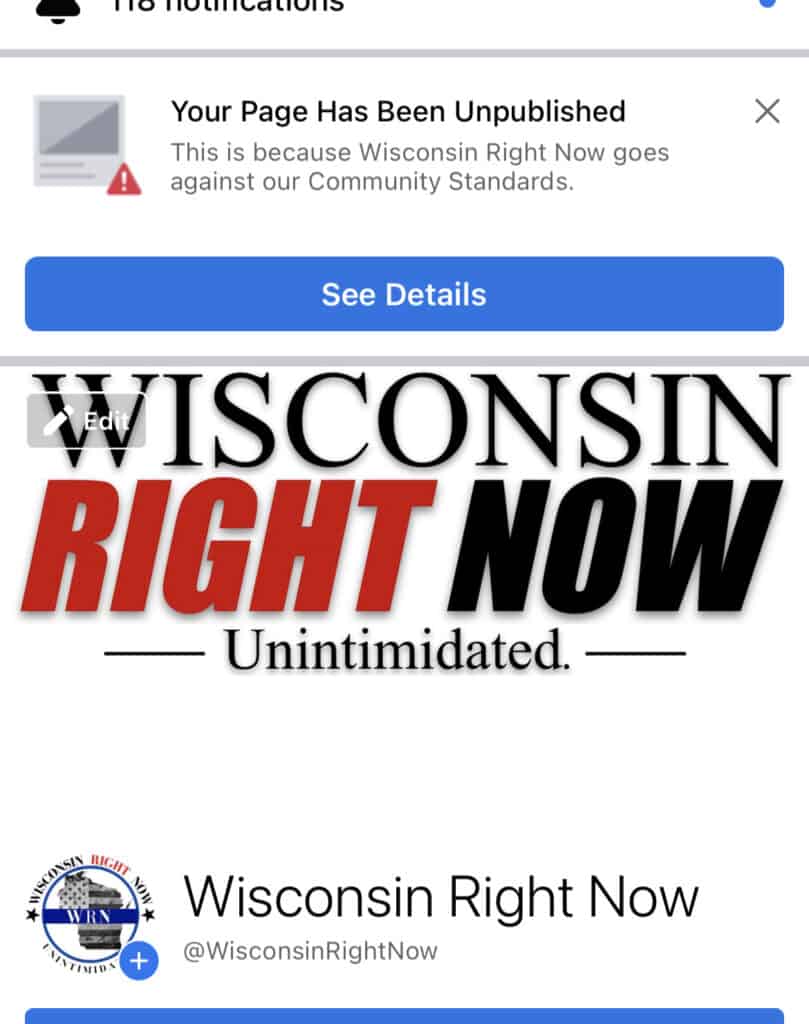 Yet check out what happens when you Google the same Falling Man image that ran with our story share!

There are many people who share the iconic image without having their pages unpublished by Facebook. Only the award-winning conservative news site is targeted right before the midterms. A few of many examples:

The story we shared compared Junod’s Falling Man piece to the horrors of people who died in Afghanistan, falling from planes. The point of the piece, which ran on an Australian news site, was that people should not look away from the horrors; we need to remember and properly appreciate the civilian lives that were lost. Context is everything. The story was meant to encourage honor for the dead and an appreciation of the full cost of war and terrorism. Junod’s piece did the same. He does not believe the images of 9/11 jumpers, including the Falling Man, should be censored. It can also be found here.

Junod wrote that the Falling Man – the iconic photo of an unidentified man jumping from the World Trade Center – was the equivalent of the unknown soldier. Ironically, the entire point of his piece is that we should not look away and that the media were wrong to censor the image.

“…the only certainty we have is the certainty we had at the start: At fifteen seconds after 9:41 a.m. on September 11, 2001, a photographer named Richard Drew took a picture of a man falling through the sky – falling through time as well as through space. The picture went all around the world, and then disappeared, as if we willed it away. One of the most famous photographs in human history became an unmarked grave, and the man buried inside its frame – the Falling Man – became the Unknown Soldier in a war whose end we have not yet seen. Richard Drew’s photograph is all we know of him, and yet all we know of him becomes a measure of what we know of ourselves. The picture is his cenotaph, and like the monuments dedicated to the memory of unknown soldiers everywhere, it asks that we look at it, and make one simple acknowledgment. That we have known who the Falling Man is all along.”

And so it remains true of those who fell out of the planes in Kabul.

Indeed, if you search the people falling from planes in Kabul, many, many examples – photos, videos, and stories – come up on Facebook and haven’t resulted in those pages being unpublished.

We are not arguing that those pages be unpublished. We are demanding that our page be republished. We believe censoring the images in Kabul could be construed as an attempt to protect Joe Biden from the consequences of his disastrous decisions in Afghanistan. We believe that allowing the images of 9/11 jumpers forces people to appreciate the humanity lost that day and encourages them never to forget, which is basically the point of the beautiful piece by Tom Junod.

There is no way to accuse Junod’s masterpiece of sensationalism.

Wisconsin Right Now did not have a long list of violations before Facebook unpublished us for the Falling Man post. And the ones we had were ridiculous. Facebook started restricting us last November because of our fact-based coverage of the Kyle Rittenhouse trial, for which we won prestigious Milwaukee Press Club awards. The site dinged us for a factual analysis of Wisconsin law regarding Rittenhouse’s gun charge even though the judge agreed with that analysis a few days later in court, dismissing the charge.

They didn’t like a silly meme we posted of Rittenhouse and the judge playing videogames. And they said a Fox News story we shared about Trump was rated partly false by their factcheckers. That’s it. Rittenhouse, it should be noted, was acquitted by a jury of his peers, but Facebook had removed his presumption of innocence, restricting our site, even though we were reporting the news, even going to the scene to interview witnesses and finding missing ballistics evidence later discussed during the trial.

Facebook must restore our page. Before the midterms. Since we have also covered Facebook’s influence in Wisconsin’s elections, and since we have offered news about candidates that the other media will not report, it’s clear that keeping Wisconsin Right Now’s page invisible gives Democratic candidates an unfair advantage in a critical battleground state.