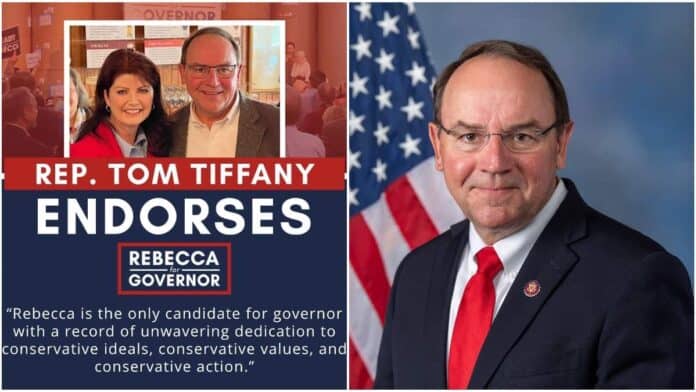 Back in 2010, the economic future of our state was deeply troubling. Red tape and regulations
were crippling businesses. Taxes were too high. Wisconsinites were losing their jobs, and our
state had multi-billion-dollar deficits. It was clear that our Wisconsin way of life and the ability for
our families to prosper was under attack, so I stepped up and ran for public service.

It wasn’t easy to turn our state around. Democrats fled the state, conservatives faced recall
attempts, some had paramilitary-style raids on their homes, and our Capitol saw protests unlike
ever before. But I wasn’t alone in that fight. Rebecca Kleefisch and Scott Walker stood shoulder
to shoulder with me and my Republican colleagues in the Legislature to pass some of the
boldest conservative reforms ever seen in our state.
As Lt. Governor, Rebecca worked alongside Governor Walker and the Republican Legislature
to cut taxes by $13 billion and get more Wisconsinites working than ever before. Together, we
banned late-term abortions and enacted pro-2nd Amendment policies like concealed carry and
Castle Doctrine. We repealed prevailing wage laws, passed right-to-work legislation, and
implemented drug testing and work requirements for welfare programs. We implemented voter
ID, voter residency requirements, and other ballot security measures that made it easy to vote
and hard to cheat. With these conservative reforms, we were able to navigate Wisconsin out of
the Great Recession and into an era of prosperity.
Today, it’s a different story here in our state. Under Governor Tony Evers, Wisconsin once
again faces a troubling future. The cost of living and violent crime are on the rise. The size of
government continues to grow while the quality of the services it provides continues to decline.
Our individual freedoms and the chance of a prosperous future for our children are under attack. Wisconsin is on a dangerous path and it’s time for a change. Wisconsin needs someone who has proven they will provide effective leadership and who will work to get real results for our communities. That person is Rebecca Kleefisch.

I’m endorsing Rebecca for Governor because she is a tested leader who I know won't compromise on our conservative values when the going gets tough. Rebecca and I share the values of a working class upbringing, as parents of young daughters and small business owners who were concerned for our communities.

As a citizen legislator, my message to constituents has always been simple. It’s that you can count on me because my words come with action and a record of never compromising on our shared values. I know Rebecca’s words do as well. Rebecca is the only candidate for governor with a record of unwavering dedication to conservative ideals, conservative values, and conservative action. I know she is the candidate with the fire and drive to push forward the next era of great conservative reform in Wisconsin.

Governor Tony Evers has failed our state. But I know Wisconsinites will always be able to count on Rebecca to protect our communities, protect the unborn, and protect our vote. Most importantly, we can trust that Rebecca will always put Wisconsin first. Rebecca is a consistent, proven conservative who helped pull Wisconsin out of difficult times before. I know she can do it again. That’s why I am endorsing Rebecca for Governor and I urge others to support her
candidacy.