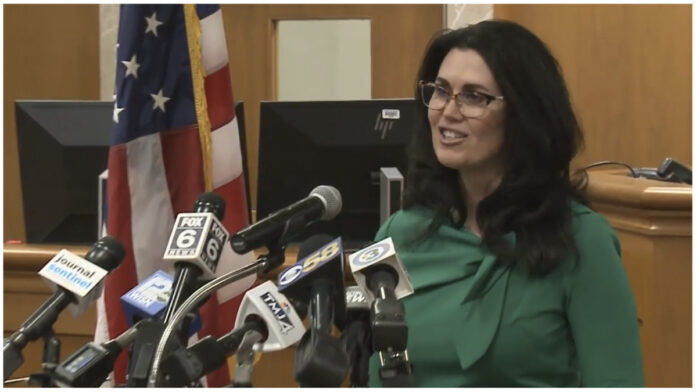 Chief Judge Jennifer Dorow announced on Wednesday that she was running for state Supreme Court, saying she wants her three children and “all of Wisconsin’s young people” to live in a “safe, prosperous state, where the rule of law and respect for the Constitution are part of our core values.”

In the press conference at the Waukesha County Courthouse, where she is a judge, Dorow said she made her decision after many discussions with family and close friends and a “lot of prayer.”

“I am running as a judicial conservative to carry on the legacy of a judicial giant and someone I respect and admire, and that’s Justice Patience Roggensack,” said Dorow, who is running for the seat that Roggensack, a conservative, is vacating.

Although the race is technically non-partisan, it is for control of the court. Dorow will have a primary with former state Supreme Court Justice Dan Kelly, a conservative, who is already in the race, and against two liberals, Milwaukee Judge Janet Protasiewicz and Dane County Judge Everett Mitchell.

Protasiewicz quickly used partisan left-wing extremist rhetoric on the campaign trail, ranting about “right-wing extremists” to liberal publications. She has made it crystal clear that she holds left-wing views on abortion, even though judges are not supposed to telegraph their opinions on issues that could come before the court. On Twitter, Protasiewicz promised to “vigorously defend… women’s right to make her own decision when it comes to abortion.”

Because it’s a non-partisan primary, the top two of four will advance to the April general election.

Dorow, who was appointed to the Waukesha County bench by former Gov. Scott Walker and was re-elected to the Waukesha bench twice, recently earned accolades from people of all backgrounds for her handling of the Darrell Brooks trial.

“Now is the right time for me and my family to pursue what I hope will be the next chapter in my judicial career,” she said in her announcement speech.

“I am excited to officially announce my candidacy for the Wisconsin Supreme Court.”

“If you know me at all I do wear my emotions on my sleeve,” she added. “It’s just so overwhelming to be here today.”

She was joined by her husband Brian Dorow, a former Waukesha police supervisor, dean of criminal justice, and deputy assistant secretary of Homeland Security. They were also joined by two of their three children.

“I would be remiss if I did not publicly thank him for his love, his support and encouragement and his never-ending energy,” Jennifer Dorow said of Brian Dorow. “He is my motivation and inspiration; without his support, I would not be at this podium today. Thank you dear, I love you.”

She also thanked her parents, saying she owed them “such a debt of gratitude for always supporting me,” and she thanked her kids, calling them her “inspiration in so many ways, including my decision to run for the state’s highest court.”

We have reached out to Kelly’s campaign for comment. He has announced law enforcement endorsements in recent days, most recently Washington County Sheriff Martin Schulteis.