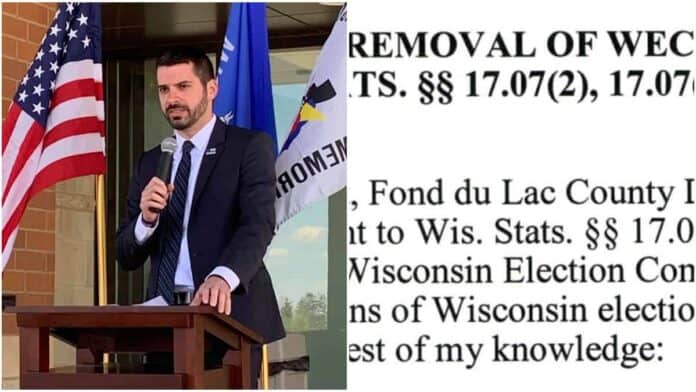 “The Milwaukee County District Attorney’s Office provided analysis as to why they believed criminal charges against the WEC board could not be proven beyond a reasonable doubt. They are wrong on the law” – Fond du Lac County DA Eric Toney.

Toney, who is running for state Attorney General as a Republican, filed a verified complaint with Evers’ office, asking that he remove Wisconsin Election Commission board members, Marge Bostelmann, Julie Glancey, Ann Jacobs, Dean Knudson and Mark Thomsen, “for cause based on their actions in knowingly exceeding their statutory authority by violating Wisconsin laws during the August and November elections in 2020.”

Toney is running as a Republican for Wisconsin Attorney General. Democratic AG Josh Kaul has refused to investigate WEC’s actions despite a request from the Racine County sheriff.

Toney told Evers in a letter attached to the complaint: “The basis for this verified compliant is my review of a copy of the Racine County Sheriff’s Office investigation into election-related activity at the Ridgewood Care Facility in Racine County, including the WEC directives that Special Voting Deputies… be suspended and not dispatched to nursing homes and care facilities during 2020 elections, which is a violation of the SVD requirement in Wis. Stat. §6.875.”

Toney said he reviewed the materials to see whether criminal charges should be filed in Fond du Lac County against the board members for violating state law as a “criminal conspiracy” because Fond du Lac County clerks relied on the same guidance on SVDs as clerks in Racine County.

Racine County Sheriff Christopher Schmaling previously referred criminal charges to the Racine County DA on the same grounds; That DA, Patricia Hanson, also determined that they exceeded their authority under the law, writing, “It is appalling to me that an appointed, unelected group of volunteers, has enough authority to change how some of our most vulnerable citizens access voting.”

However, ultimately Hanson wrote that she lacked venue to pursue charges because state law requires the charges to occur in the home counties where the commissioners live.

Toney came to the same conclusion. He could not file charges because he doesn’t have venue as none of the commissioners lives in his county. The home county venue requirement was established in part due to the prosecutor of former Republican leader Scott Jensen.

“Based upon my review of the Racine County Sheriff’s investigative file, which includes WEC documents, conversations with the lead investigator and Fond du Lac County Clerk Lisa Freiberg, City of Fond du Lac Clerk Margaret Hefter, along with statutory and case law research. it is apparent the WEC had no legal authority to suspend SVDs and numerous Wisconsin criminal law violations have been committed by the WEC,” Toney wrote Evers.

“Based on these law violations, those five WEC board members must be removed for cause, pursuant to your statutory authority to do so under §17.07(2), if the legislature is determined to be in recess and §17.07 (3). I am not asking that the sixth board member, Robert Spindell, be removed based upon his public abandonment of the conspiracy and subsequent votes against suspending SVDs.”

According to Toney, the WEC board, as unelected appointed officials and without lawful authority, “assumed they had more power than the Governor of Wisconsin and the Wisconsin Legislature by directing election clerks in Wisconsin not to dispatch SVDs, thus breaking Wisconsin law. The WEC could have sought an Attorney General’s opinion on this issue but instead the WEC went rogue and stole the power from our elected legislature and governor in violation of Wisconsin law. Legal ’cause’ exists for the removal of five of these WEC board members.”

Toney’s legal analysis runs counter to that of Democratic Milwaukee County DA John Chisholm’s office, which declined to press charges against the two commissioners who live in Milwaukee County (a second Democratic DA has also declined to press charges. The commissioners deny wrongdoing, saying they were operating out of concern for elderly nursing home residents during the pandemic).

“Wisconsin law allows the WEC to issue formal and informal advisory opinions related to elections pursuant to §5.05(6)(a)1, which requires a request for an opinion from the WEC,” Toney wrote. “If the WEC gives out an opinion, under §5.05(6)(a)2, they are required to state the specific legal authority for their opinion. The WEC violated both §5.05(6)(a) 1 and 2 and §6.875. The WEC gave out a directive, not an opinion, that SVDs were not required and shall not be dispatched, going beyond their statutory authority. These acts created election fraud violations of §12.13(2)(b)7 as well as misconduct in public office violations of §946.12(2), as §939.31 Conspiracy, because the WEC knowingly exceeded their lawful authority.”

He noted: “The Milwaukee County District Attorney’s Office provided analysis as to why they believed criminal charges against the WEC board could not be proven beyond a reasonable doubt. They are wrong on the law. That analysis misapplies ‘directory’ versus ‘mandatory’ election law to the actions of the WEC. The Milwaukee County District Attorney also failed to account for the difference between Wisconsin law in 1955 and 1981, which is different than Wisconsin law in 2020. In fact, there were no SVD laws in 1955 or 1981.”