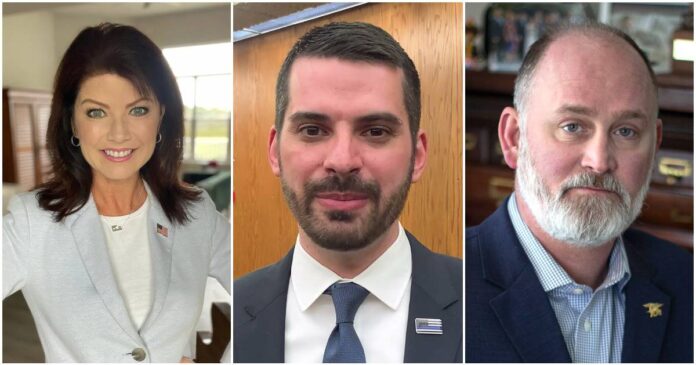 Who do Republicans in the 3rd Congressional District want to be their nominees in the top state races on the ballot this year? Rebecca Kleefisch for governor, Eric Toney for attorney general and Pat Testin for lieutenant governor all easily won the caucus’s straw poll in their respective races. The caucus also unanimously endorsed former Navy SEAL Derrick Van Orden for Congress.

There are eight congressional districts in the state.

Jay Schroeder and Orlando Owens won the straw poll in the secretary of state and state treasurer’s races.

The 3rd Congressional District runs along the western side of the state and includes the cities of La Crosse, Eau Claire and Stevens Point. It’s a key swing area of the state.

We obtained the numbers from Chair Bill Feehan. Here are the results

Feehan released the results on April 10, 2022. In an email he sent to us, Feehan wrote,

“The 3rd Congressional District Caucus assembled Saturday April 9th at Cedar Creek in Onalaska. Attendance at the caucus was very high.” He added,  “The caucus unanimously renewed its endorsement of Derrick Van Orden for Congress.

“I am incredibly humbled and thankful to the 3rd District Republican Party for your unanimous endorsement of my campaign to bring real Leadership back to Washington.
Van Orden said. “We are united and stand ready to push back on the radical policies of Nancy Pelosi and Joe Biden. Policies that are driving up costs for Americans, creating crises at our border, and taking our nation down the path to socialism. This November, Republicans will bring sanity back to Washington, starting right here in Western Wisconsin.”

Feehan noted that 17 candidates for statewide office addressed the caucus, including Kleefisch and Ramthun. Kevin Nicholson did not attend, he wrote.

“Awards were presented. Notably, Mark Burg of Onalaska was announced as the 2021 Alvan Bovay Award winner. This award is named for the founder of the Republican Party. One person from each Congressional District is selected for the award,” Feehan wrote. “He will receive his plaque on stage at the Republican State Convention in Middleton on May 21st.”
He added, “Chairman Scott Bolstad of Eau Claire County received the Tommy Thompson Leadership Award which recognizes outstanding dedication and service to the Republican Party.”