Deanna Alexander Asks, ‘Why the Secrecy?’ on District 18 Election Results 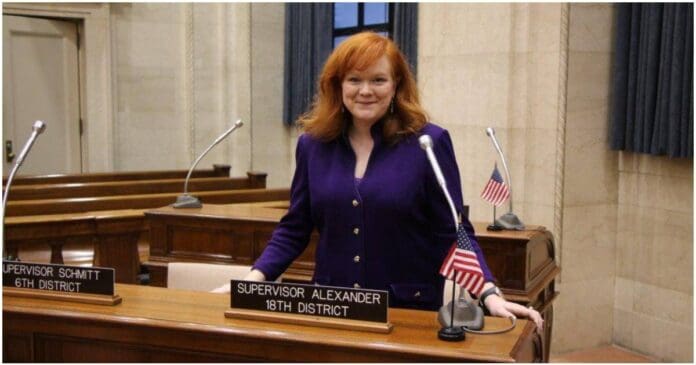 On Thursday, two days after the election, we asked the head of the Milwaukee County Election Commission who won in Milwaukee County Board District 18, but she would only give us the overall vote total.

Former Milwaukee County Supervisor Deanna Alexander, a conservative, is raising concerns about why Milwaukee County doesn’t have preliminary results in the “battle of the write-in” candidates for her old supervisory district.

No candidate made the ballot in the 18th county board district, which spans the northwest corner of the city. There were eight write-in candidates on the ballot on Tuesday, April 5, 2022, including Deanna Alexander.

As of Thursday evening, the county was still not releasing preliminary results, and that was raising some eyebrows.

We spoke to Alexander, who asked, “Why the secrecy? What is the big deal with posting the preliminary results? Why do they not have all of the paperwork for the wards? Why are they going back to the city?” Deanna Alexander said an election commissioner told her that it sounded “like they are missing two wards and can’t find them.”

She doesn’t understand why the preliminary results aren’t public. She said she asked Julietta Henry, Director of the Milwaukee County Election Commission, “very directly, ‘Can you please give me a copy of the tally sheets from the wards’ and she said no, we took them out and looked at them and put them back in bags and are done looking at them for now.”

On Thursday, two days after the election, we asked Henry who won, but she would only give us the overall vote total; there were 1,855 write-in votes, she said. But when we asked who was ahead, she said, “I don’t know because I don’t have the preliminary total.”

“Milwaukee County is missing 2 entire wards of ballots? They are nowhere to be found? These people are incompetent. No wonder no one trusts our elections. Join me in supporting Deanna Alexander as she weighs her legal options: https://deannaalexander.com/#donate,” tweeted Kevin Nicholson, Republican gubernatorial candidate.

Milwaukee County is missing 2 entire wards of ballots? They are nowhere to be found? These people are incompetent. No wonder no one trusts our elections. Join me in supporting Deanna Alexander as she weighs her legal options: https://t.co/c1BIGASxpB. https://t.co/bjvJ6Waj5h

We asked Henry about claims that two City of Milwaukee wards are “missing,” and she said that two wards had not yet reported their totals to the County for district 18. “They’re missing one of the things off our checklist. They’re missing a poll list,” she said of one of those wards. Poll lists are the lists where voters are assigned a number and sign their name. She described the files for those wards as “incomplete,” but said she did not know what the second ward was missing.

However, Henry downplayed the controversy, saying she expected to have the missing paperwork by Friday, April 7. She said that the City of Milwaukee’s returns and paperwork are not due until Monday, April 11. Thus, she stressed, “The City of Milwaukee has until Monday to complete everything. There is no story here.” She stressed that no one had done anything wrong. At the latest, she said the county will have all results certified, not just District 18’s, by April 15, the deadline. She said that officials need to check whether any poll workers “inadvertently” left a write-in sheet or log-in machines.

We previously ran a column by contributing writer Paris Procopis on this race; he wrote, “The incumbent, Russell Goodwin, ran for County Board in 2020 under the public impression that he was a conservative and ran unopposed and won.” But Deanna Alexander says that Goodwin is now supported by the Democratic Party. He didn’t get enough valid signatures to make it on the ballot, so he ran as a write-in too, as did six other people.

Deanna Alexander’s lawyer has filed an open records request demanding a copy of the records but was told there were no responsive documents.

“There’s already been a hand count done,” she said. “They have the totals. They refuse to talk about them and release them, and we don’t know why.”