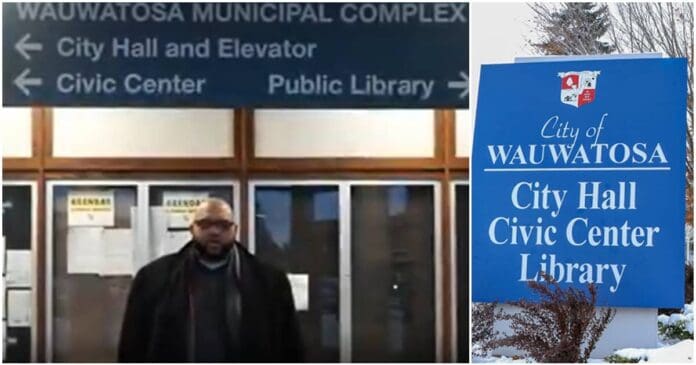 Sean Lowe and his opponent are tied with 702 votes. There is a single provisional ballot that hasn’t been opened yet. Lowe is running on an equity and police reform platform.

Wauwatosa aldermanic candidate, Sean Lowe, turned his campaign finance reports in late, in violation of the law, AND they contained donations from some controversial figures that exceeded allowable limits under campaign finance laws, including former Democratic Milwaukee County Executive Chris Abele and the husband of a lawyer suing the city with BLM attorney Kimberley Motley, Wisconsin Right Now has learned.

Furthermore, 50% of his donors were from out of state, the late reports, which we obtained through an open records request, revealed.

Because Sean Lowe, who has advocated for police reform and heads the Wauwatosa Equity and Inclusion Commission, filed his reports late, voters were prevented from knowing who was funding Lowe before the election. The reports also indicate that he spent all of the money, raising the question as to whether the unlawful donations made a different in a race that tied, with a single provisional ballot due to break that tie on Friday.

Sean Lowe was running for District 5 alderman in Wauwatosa against Rob Gustafson. Both received 702 votes. There is a single provisional ballot that hasn’t been opened yet. If that voter doesn’t provide necessary identification to the city by 4 p.m. Friday, a recount will be held in the contest.

Indeed. Every vote counts and all elections matter! https://t.co/RpV7UdQVZ2

Put another way: If Wauwatosa voters were able to learn who was funding Sean Lowe, and that his campaign finance reports contain alleged violations and donations from people outside Wauwatosa and some controversial figures besides, would that have changed the minds of at least one more voter – and changed the results of the race? If he didn’t have as much to spend, would that have mattered in such a close race?

Wisconsin Right Now obtained the violation report through an open records request. We were then able to do what voters could not because of the late filing; we reviewed it to see who donated to him. We discovered four donations that violated campaign finance limits for the local race, which are $500 for individuals and $400 for PACs. They are:

-Chris Knowlton, who gave $519.52 on March 14. He is the husband of Kathryn Knowlton, whose name appeared with Motley’s on lawsuits suing the city over its handling of the demonstrations that erupted into the police shootings by Joseph Mensah.

-Marshawn Wolley, a CEO from Indianapolis, Indiana, who gave $519.52 on March 19. It’s not clear why all three gave such an odd, identical amount. His company works to advance diversity and equity initiatives.

The report was filed by Chelsea Cross, his campaign manager. Although the reports ask for a signature and date, there is no date listed with her signature on the reports.

In contrast, Lowe’s opponent in the race didn’t have to file a report at all because he didn’t make the $2,000 minimum threshold for doing so, the city clerk told WRN.

For example, one donor, Eu’nice McCoy, is the director of event marketing for the National Urban League (her Linked In page says Black Lives Matter.)

Another, Katelyn Harris-Lange, is a recruiter for Robinhood, the controversial stock trader, who lives in Arizona.

We spoke with Dan Carlton, administrator of the Wisconsin Ethics Commission. He outlined the process generally for us and confirmed the limits for the local race were $500 for an individual and $400 for a PAC. He said there are “potential criminal penalties” for both violations (late reports, donations over the limit), but that usually such violations are “handled civilly” because criminal wrongdoing would require proof of intention, which is tough to establish.

“Normally it’s an accident or misunderstanding,” he said.

Sean Lowe has attended the Get Your Knee Off Our Necks Commitment March with Motley, who has been a thorn in the side of Wauwatosa police for months, according to an old Milwaukee Journal Sentinel article. He has called for “police reform” in Wauwatosa, the article says. He’s chairman of the Wauwatosa Equity and Inclusion Commission. In 2021, he tweeted, “No charges for the police officer, no justice for Jacob Blake’s family. Shameful.” In 2020, he wrote, “Some of y’all had #BlackLivesMatter hashtags last month and this month trying to convince people that Kamala Harris isn’t black. Please have several seats! I support @KamalaHarris ✊🏽 #HerLifeMatters”

WRN reached out to Chris Abele and Sean Lowe for comment and will update the article with any response.