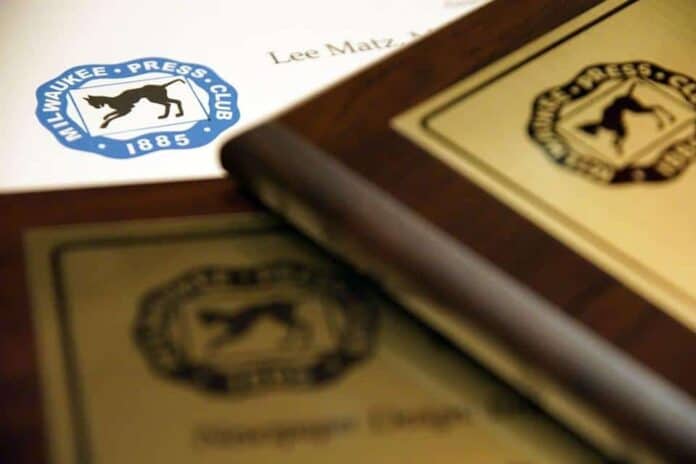 The awards came in the video and column writing categories.

The Water Street video stories involved gunfire breaking out during the Bucks’ championship celebration; video of a shooting victim collapsing in the street; a Milwaukee police foot chase; and a shooting on Water Street as city officials downplayed the violence, putting police officers and citizens in immense danger.

We wrote in one of the stories, “As we stood on Water Street, just down from Juneau, a wild fight broke out in front of us, despite multiple police officers standing right there. A gunshot rang out as a shooting erupted a few feet away from us. Wisconsin Right Now’s Jim Piwowarczyk captured the chaos – and the sound of the gunfire – on video.”

The Milwaukee Press Club contest is a prestigious statewide contest; Piwowarczyk and McBride were named as award-winners on March 8, 2022, as the Milwaukee Press Club released its list of finalists. All finalists win either gold, silver or bronze awards. The specific places will be announced at the awards ceremony later this spring. The state’s major newspapers, online sites, and television stations compete in the contest.

Piwowarczyk also won a photography award in 2021, and McBride is the recipient of numerous previous Milwaukee Press Club awards for everything from investigative reporting to magazine writing.

Wisconsin Right Now is an entrepreneurial news site founded by Piwowarczyk and McBride to tell the stories the media ignore or twist. Its traffic ranks WRN among the top online news sites in the state, and the site is ranked #2 of all independently run online news sites in Wisconsin.

In the Water Street stories, McBride and Piwowarczyk received tips from people in law enforcement that the media were not fully covering how bad the mayhem had gotten, at a time that then Mayor Tom Barrett and other city leaders were downplaying the violence. Wisconsin Right Now’s videos captured a shooting (a few feet away from them), a police foot pursuit, and more. The Rittenhouse column essentially predicted the trial’s outcome (acquittal on self-defense) in a detailed explanation of the evidence at a time when much of the media were focusing on irrelevancies like Rittenhouse yawning in court and downplaying his due process and self-defense arguments, in an effort to shoehorn the defendant into a simplistic political narrative.

Jessica McBride’s column began, “The prosecution’s presentation on the second day of the Kyle Rittenhouse trial in Kenosha, Wisconsin, was a train wreck. You wouldn’t know it from the rest of the media, of course, which focused on Rittenhouse yawning or other irrelevancies. How bad was it for the state? So bad that the prosecutor’s opening statement almost made the case for the defense.”

As a side note, students in McBride’s journalism classes at the University of Wisconsin-Milwaukee also won numerous awards in the same contest.

These are the categories that Jim Piwowarczyk and Jessica McBride won awards in for Wisconsin Right Now with the other award-winners in those categories, in no particular order. Actual award placement– gold, silver and bronze – will be announced May 6 at the club’s Gridiron Awards event at The Pfister Hotel in Milwaukee.