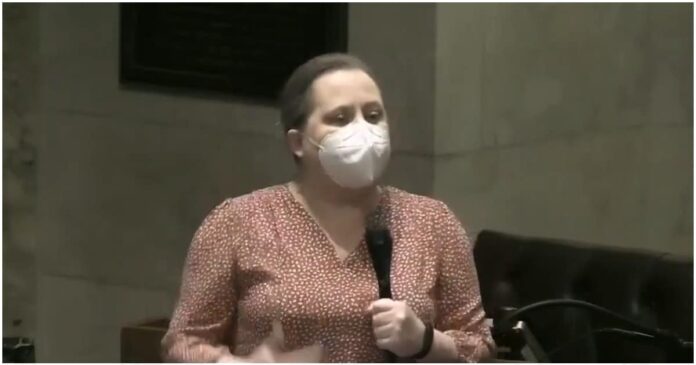 Wisconsin State Rep. Jodi Emerson, a Democrat from Eau Claire, falsely said law enforcement started as “slave catchers” and is a racist profession while speaking on the floor of State Assembly on Feb. 22.

This comes on the heels of Representative Lee Snodgrass’s tweet last week that parents should have no input in public education.

Emerson said, “If a system is racist, and we have to admit that the history of law enforcement did have its roots in racism, when it starts out as slave catchers I’m sorry it is racist.”

“Representative Emerson’s claim that law enforcement is racist twists the facts, ignores Wisconsin history, and is a slap in the face to all those who serve or have served our communities by putting their lives on the line to make us safer.

“Policing dates back thousands of years and began well before American chattel slavery. As long as there have been laws, there has been a need to enforce them. In Wisconsin, policing began with county sheriffs in the 1830s. There is no evidence that law enforcement in Wisconsin was created to enforce slavery, an abhorrent practice that early Wisconsinites clearly opposed.

“Outright stating that Wisconsin law enforcement was created to catch slaves is ignorant, misleading, and disrespectful. This misinformation has no place in the Wisconsin Legislature. Statements like these will only increase political polarization, increase mistrust of police, and make it more dangerous for law enforcement to carry out their duties. Once again, Wisconsin Democrats are displaying just how out of touch they are with reality and mainstream Wisconsinites.”

According to Virginia Wesleyan University, Early colonial police forces were made up of volunteers and other citizens, known as “watch groups.” They were privately funded and employed individuals on a part-time basis. Boston started its first in 1631, followed by New York City in 1658 and Philadelphia in 1700. Responsibilities included protecting property and public safety. Watch groups also performed public services. According to The History of the Police, “watch groups provided social services, including lighting street lamps, running soup kitchens, recovering lost children, capturing runaway animals, and a variety of other services.”

Here is a great summary of the history of policing.