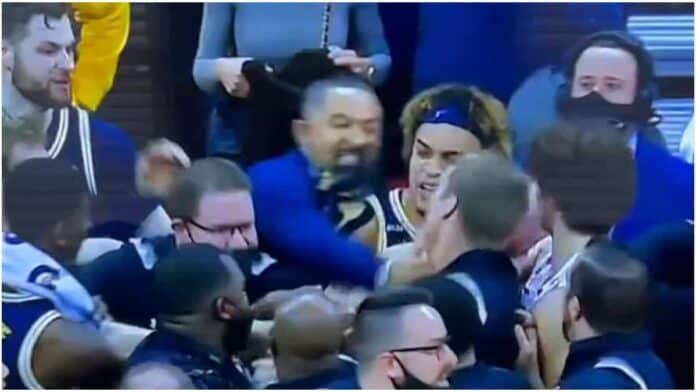 Video shows the ugly altercation that broke out at the Michigan-Badgers game when Michigan head coach Juwan Howard throws a punch or slap at a Wisconsin Badgers assistant coach. Wisconsin won the game 77-63.

First, Howard and Wisconsin coach Greg Gard got into a verbal disagreement.

According to Yahoo Sportss Howard “was upset that Gard called a timeout in the final minute of the game when Wisconsin held a big lead.” At one point, Gard made physical contact with Howard. “Another Wisconsin assistant began yelling at Howard,” Yahoo explains.

According to ESPN, “Howard put his finger in Gard’s face and grabbed Gard’s sweater before Krabbenhoft came over.”

In a statement, the Big Ten conference said, “The Big Ten Conference is aware of a physical altercation involving Michigan Head Coach Juwan Howard at the conclusion of the Michigan Wolverines and Wisconsin Badgers men’s basketball game. The conference is in contact with both member institutions and is currently assessing the incident. The conference will provide more information and will take swift and appropriate disciplinary action when it completes its review.”

Not surprising but the only one wearing a mask Michigan coach Juwan Howard throws slap/ punch against the opposing team coach. Needless to say they lost but at least his mask game is strong 😷 pic.twitter.com/6lsVVUDVSg

I’m outside of Michigan and the Wisconsin coach started it. The slap was a terrible reaction. Only words should have been used. But you don’t grab another grown man without expecting some form of retaliation pic.twitter.com/gM9i3nXDWG

According to ESPN, Michigan athletic director Warde Manuel said in a statement that he apologized to Wisconsin leaders.

“I am aware of and watched the end of our men’s basketball game,” he said, according to ESPN.

“There is no excuse for any of our staff or student-athletes to get into a physical altercation with others regardless of instigating factors. I reached out and apologized to Chris McIntosh and President Coleman has reached out to UW Chancellor Blank to apologize for the totally unacceptable behavior,” he said. “We will review the situation more thoroughly and work with the Big Ten Conference as they determine their disciplinary actions and will determine if further disciplinary actions are warranted.”