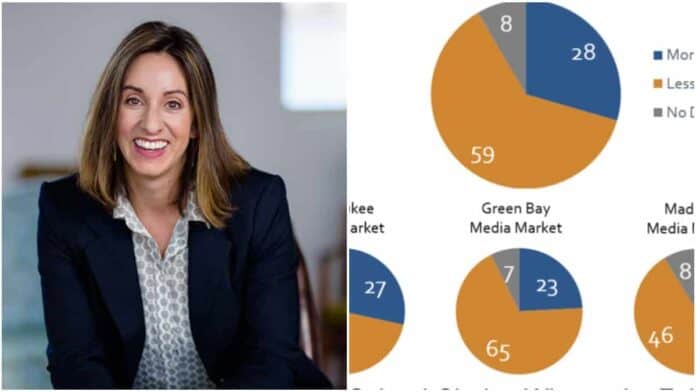 State Rep. Lee Snodgrass, D-Appleton, tweeted that parents should not “have a say” in their child’s education unless they home school their kids or pay for private school tuition out of their “family budget.” That arrogant attitude isn’t sitting well with Wisconsin voters throughout the state, including in Democratic-leaning areas, according to a new poll.

Snodgrass is the Vice Chair of the state Democratic Party.

In a press release, School Choice Wisconsin, which commissioned the poll, wrote that Wisconsin voters “are sharply at odds with a Democratic party official and legislator who said parents who want ‘to have a say in their child’s education’ should home school or pay private school tuition.”

In the release, Nic Kelly, president of School Choice Wisconsin, said the survey (further results to be released Feb 22), showed strong support for Wisconsin’s school choice programs. “On a wide range of issues, voters confirmed that an awakening has occurred. Parents want more options and a greater say in the schooling of their children,” he said.

Snodgrass posted her comment while an Assembly committee held a hearing on legislation to create a Parent Bill of Rights.

“Representative Snodgrass is out of touch with Wisconsin residents,” said Kelly. Citing a scientific, random sample of 700 likely voters, Kelly said 59% of respondents indicated that they would be less likely to support a politician who held Rep. Snodgrass’s view, according to the release.

Only 28% said they would be more likely to support a candidate with that opinion, the release said.

Opposition to Snodgrass’s Comment Is Spread Throughout the State

Snodgrass is out-of-step with people throughout the state, the poll found.

“Opposition to Snodgrass’ comments is widespread throughout the state, spiking to 60% in the crucial Milwaukee media market and 65% in the Green Bay market,” the release says.

“Even in the liberal stronghold of Madison, a strong plurality of voters said the statement makes them less likely to support a candidate (47% less likely / 38% more likely). Similarly, there is strong opposition among both male and female voters, 61% and 57% respectively.”

The survey was conducted for SCW between Feb. 13 and 16 by OnMessage Inc., a national public opinion research firm. “OnMessage was recognized by the American Association of Political Consultants as ‘Pollster of the Year’ in 2019,” the release said.

Lee Snodgrass, who represents District 57, tried to walk back her tweet, claiming it was lacking in nuance and that she didn’t mean what she wrote, but the damage was done. She wrote in part, “I deleted my Tweet since it was lacking in nuance and easily misinterpreted. I wouldn’t want anyone to think that parents do not have a role in their child’s public education-I sure did. I encourage all parents to engage in voting for school board, join PTO and meet with teachers”

The tweet controversy comes as parents throughout the state have stood up and demanded a greater voice in schools due to concerns over issues like Critical Race Theory and districts’ pandemic responses.

Snodgrass quickly deleted the tweet when controversy ensued, but not before people screenshotted it.

According to Center Square, the Parents Bill of Rights details 15 rights that parents in Wisconsin schools would have including:

Parents submitted this letter to legislators:

We are parents of public-school children in Wisconsin, as well as Wisconsin taxpayers. We are writing today in support of Assembly Bill (AB) 963, important and necessary legislation that will create a Parental Bill of Rights in Wisconsin.

Parents like us want to be deeply involved in the education of our children. We want to be partners with their teachers and school administrators. Unfortunately, too often the school establishment stands against parents like us who sincerely care about our children’s education and experiences while in school. This is deeply concerning to us.

We applaud Representative Gundrum, Senator Darling, and the cosponsors of AB 963 for taking a stand for parents. The legislation will help parents take back power from the public-school establishment, ultimately empowering parents and improving outcomes for children. Please support the legislation when you have an opportunity so that the fundamental rights of parents as it relates to the upbringing, education, health care, and mental health of their children is clear and protected in Wisconsin.